Why does it matter if I’m living broken or living healed? Short answer: Turns out I’m not the only person in the world.

Living healed isn’t just about me.

Forgive me for revealing just how adept I am at selfishness, but sometimes I forget that my life isn’t all about me. That sounded horrible in my head, and it’s even worse now that I’ve typed it out, but that’s the truth nonetheless. I can so easily slide down the slope of self-condemnation that I lose sight of everyone else. And then when I do think of them, it’s to feel bad that they have a blight like me around. Self-pity is gross and ridiculous.

Between sanctification and healing, I am less and less susceptible to the temptation to navel gaze. And that’s a blessing because introspection is not a victimless crime.

Yesterday I had a call from a lovely woman, whom I’ll call Millie Pete. Millie had placed an order a few days ago, yet here she was calling again the very next day. She had a question, of course, but what she later admitted was that she wanted to talk to me again because it seemed like I meant what I said about the Lord. Millie explained that when I said that the Holy Spirit gave me everything that I needed, it really sounded like I was telling the truth. She said it gave her hope. I could just cry over that.

I often talk about my personal relationship with the Lord, and it is the one thing from which everything else flows. It is the vital core of my life and I hold it as the most dear. But that relationship, full of companionship and ever-deepening fellowship and union, isn’t just about or even for me.

I beseech you therefore, brethren, by the mercies of God, that you present your bodies a living sacrifice, holy, acceptable to God, which is your reasonable service.
Romans 12:1 NKJV 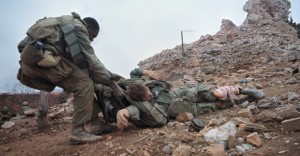 I am a vessel for the indwelling life of Jesus Christ. I am eyes and ears and hands and feet and mouth for Him. He wants to love the Millies, to acknowledge them and listen to them, and occasionally speak to them. Millie didn’t respond to me; she responded to Christ in me. I didn’t say anything profound or studied or unusual. I answered a question with the truth as I actually knew it. But since Truth is a person, that’s Who she heard, that’s Who her heart responded to, and that’s Who gave her hope when she needed it.

If I stay broken and selfish, then I’m not a vessel for Christ to the lost and wounded in my life. I’m not the only one who’s been hurt. I’m not the only person with scar tissue. I’m not the only broken soul in this world—I’m one of countless weary. The difference is that my healing is assured, because I’m no longer alone. I belong now, I belong to Jesus and He is my Physician. It is now my privilege to offer myself to Him as a living sacrifice that others may be healed as well. Living healed matters to the Millies, and the Millies matter to God.

This is so totally TRUTH Jennifer. Your part is greatly appreciated.

What can I say? Jennifer, you are truly a gift from God to me by letting Him use you to reach so many of us Millies

I guess we could repeat John’s words from the Shulamite Podcast every day, for every blogpost on Get Along With God..:so I’ll repeat it at least one more time…
“Not just another method, but a living impartation”
Thanks Jennifer for His heart in you spilling out His love for us.

Yes! Each one of us is Millie. Thank you precious Jennifer. Your post put me in remembrance of Martha’s articles Towering Trees.

Jennifer, thank you for sharing the “hope of Christ “to us Millie’s. What a precious blog