Can a punch be more than just a punch? 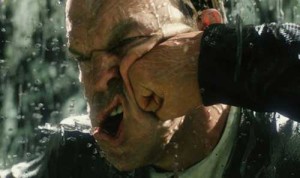 “Whenever anything begins to disintegrate your life with Jesus Christ, turn to Him at once and ask Him to establish rest. Never allow anything to remain which is making the dis-peace. Take every element of disintegration as something to wrestle against, and not to suffer. Say — ‘Lord, prove Thy consciousness in me,’ and self-consciousness will go and He will be all in all. Beware of allowing self-consciousness to continue because by slow degrees it will awaken self-pity, and self-pity is Satanic. ‘Well, I am not understood; this is a thing they ought to apologize for; that is a point I really must have cleared up.’ Leave others alone and ask the Lord to give you Christ-consciousness, and He will poise you until the completeness is absolute.”
Oswald Chambers, My Utmost for His Highest, August 20

One of my favorite things about the Holy Spirit in Oswald Chambers’ writings is the much-needed karate-chop to the throat that gets delivered so effectively! The Holy Spirit moves in many different ways and I’ve noticed that He usually pairs a punch with a hug when He deals with me on self-consciousness. It’s not only a perfect delivery system of His wisdom, I also perfectly understand how much He loves me in it. When we spiral out, the Spirit knows exactly how to lay us back down in green pastures.

Punch That Niceness Out! 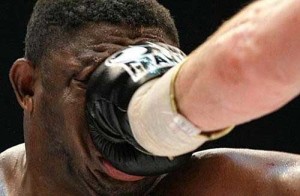 Because we “wrestle not with flesh and blood,” we don’t always deal with circumstances and people that are straightforward. In fact, we MOSTLY don’t. And apart from Jesus Christ, we are unequipped to handle any of it. Have you ever tried to be kind or reasonable with someone only to have the whole situation get much, much worse? I have! And lately the Lord has really been hooking and crooking me on this. Until it becomes the most natural thing in the world for me to take everything and everyone to Him and then LISTEN for Him, moving only when He does, by hook and by crook will be my life. The diabolical realm eats common sense and thoughtless niceties for breakfast, and the Lord is faithful to do what He must to make me “wise as a serpent and gentle as a dove.”

I’ve known most of my life that there are some things that only a punch takes care of, and when I read F. Scott Fitzgerald’s short story, The Four Fists, I knew that it would stay with me all my days – and so far, it has. (The link takes you to a free, online version, and if you’ve never read it, I highly recommend it.) What I know now that I didn’t know then is that a punch needn’t be physical to be a punch. I haven’t been physically punched for at least two decades now, but I’ve been verbally punched, emotionally punched, psychologically punched and spiritually punched. I am no stranger to a good punch, and like Fitzgerald’s character Samuel Meredith, it’s been the saving of me.

I can’t give the specifics of my latest punch, but I can thank God for it and encourage you to see in a different way any recent pummeling you may have received. A punch can make us self-conscious in the best of ways or the worst. I can either defend myself when I take it on the jaw or I can look at God to see what He wants knocked out of me. I can tell you with complete confidence that every punch that landed was resolved to God’s glory and for my own good. May they keep coming until He’s satisfied!

The diabolical realm eats common sense and thoughtless niceties for breakfast, and the Lord is faithful to do what He must to make me “wise as a serpent and gentle as a dove.” Wow. You are so crystal right! I felt quite a bit in the skin of the man, you know. Besides the fact his name is like mine (chance?.. ahaha!) it happens God has to punch me the four or eleven punches in order to push me out and forward. I am not the spiritual obedient man I though I was (dear, imagination is not a good counseller!).… Read more »

Oh Jen, reading your devotionals are always so enjoyable; but I know so difficult to embrace. Thank you for sharing your life as an example of how we are to handle these punches that come our way. So much good food for the soul! Bless you!!

Well, I read it. Did us a good measure so I took my psyche over to the corner stool to rest a bit while I decided what to do with him.

Thank you for this much-needed post, cause you also give me great handling for the punches. I want to go and read ” the four fists” and follow the Holy Spirit’s leading for my punches. BLESS YOU DEAR