You can lead a horse to water but you can’t make him drink. This saying is a cliché, to be sure, but one that has enormous implications. God can give us exactly what we most desperately need, but He won’t make us take it. Thanks to His gift of free will, we can refuse to receive what He gives us. Today I am seeing places in my life where I believe I have refused His forgiveness.

I, only I, am He who wipes out your transgressions for My own sake, And I will not remember your sins.
Isaiah 43:25 AMP

How heinous is my pride that I refuse to receive the merciful forgiveness of God? It is utterly evil. God says to me, “I will not remember your sins,” chief among them being the murderous hate and rejection of His Son, Jesus Christ. God not only forgives me, but He says that He will not even remember my sins. How then can I possibly shut the door on a love deeper than any I have known or will know? Because I’m not willing to be a stupid, base brutal human who was never going to do anything other than fall short of the glory of God. A single sinful act can have lifelong, devastating consequences. Sheep do not naturally have the eyes of an eagle, capable of perceiving tiny movements over great distances. Only when we are born again do we access the eyes of the Spirit and His own perfect discernment. Sheep stumble and bumble and run straight into danger when left to their own devices. There’s no better illustration of this than the hormonally amplified stupidity of our teen years. If you can look back on those years without a single wince, then you’re not human.

I realized that something was really wrong with me when I found myself resenting a merciful second chance for someone else. In this case it was just a character in a movie, but I found myself thinking, “That’s it? She doesn’t even have to pay for the wretched choices she made?!” And here’s the thing: she had most certainly paid! But I deemed it insufficient. And why? Because I wasn’t done paying for my wretched choices. 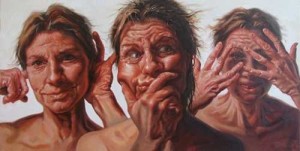 When I came to the Lord, I came out of huge strongholds of self-pity, blame, and permanent victimhood. Nothing was truly my fault. In short, I was hideously proud and lazy and irresponsible. There was enormous grace and mercy and I was so desperate that I opened my heart wide and let it pour in – I couldn’t do otherwise. But somewhere along the way, I let go of grace and began to fear that I would go back to those strongholds. So I began the fruitless, evil task of patrolling my own heart. Not in everything. Some things are easier to receive forgiveness and grace for than others.

My reaction to this character revealed exactly where in my heart I was hard and cold and hateful – the fruit of unforgiveness. I had not forgiven myself for being a selfish, wicked, stupid human. I listened to the voice of the enemy, and he always said the same thing. He told me every terrible thing that I deserved to endure for the rest of my life, and I chose to believe him. Perhaps if I continued to suffer in this way, I could ensure that it would never happen again. I didn’t forgive myself, and so I wasn’t forgiven.

And since it is through God’s kindness, then it is not by their good works. For in that case, God’s grace would not be what it really is—free and undeserved.
Romans 11:6 NLT

Thank you, Jennifer once again for putting words to what’s been happening in me for the last couple of weeks. I love you

Thank you, bless you dear Jennifer for this beautiful picture of the Lord’s heart toward us to again forgive others so that we might forgive ourselves. You have so described me: Proud, lazy and irresponsible. So correct in picture you painted of allowing fear to over=shadow HIS LOVE and Grace. May I believe and trust and receive HIS promise of HIS kindness and gace to remember my sins no more, because of HIS shedding of the BLOOD of his own perfect Son

Yes yes yes. He points my sin, and, shockingly (at least to me), He goes on His way inviting me to follow Him. He no longers points to it. His gaze is fixed somewhere else, some other place I have no idea of. He let my sin behind, He does not even remember it. He presses forward, onward. My past sin is like a self-inflicted wound that has complete healing. And the scars? Scars that still cause pain? Yes, probably there are some scars with standing pain that will not completely go in this life… like Frodo before sailing out… Read more »

Thank you, Sam. That was an excellent way of putting it. He forgives and goes on His way. I tend to stay for awhile wallowing in my misery over my very imperfect self.