As I wrote my last post about the Blood, I really began to survey my life to see where the Blood seemed to remain powerless. When dealing with current sins and failures, I can take communion and feel the amazing release and freedom that only the Blood offers. There’s a washing that the Blood performs on our soul where afterwards we feel light and clean and fresh. It’s supposed to be this way. Cleansing is one of the benefits of the Blood of Christ. But another benefit is justification, and in a few areas, I don’t feel justified.

In researching the Blood, I was also told about a message by Derek Prince called “How to Apply the Blood.” I highly recommend it!* In it, Prince shares how justification is one of the benefits of the Blood. He says that justification is “being made right, just as if I’ve never sinned.” As I said, most of the time I feel justified when I take communion. But there are areas where I feel the enemy still has a foothold to accuse me. So in looking at these areas, I see they are all beliefs from my childhood. Martha would call them “the engram of the soul” (engram: a hypothetical means by which memories are stored, i.e. the ruts and paths made by wounds that we can’t seem to get out of). It’s the lies that I believed when I was a child and now the enemy can come back and accuse me of those lies. 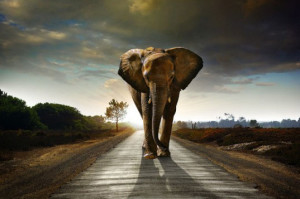 Well, as I was discussing this with a friend, I told him how they train elephants in the circus. I’m not talking about the tricks that they perform, but how they contain that ginormous beast. Think about it, you’re in a tent where you can’t easily escape and there in the ring is a 3 to 5 ton beast that could easily kill masses of people as he stampedes through the crowds. How do they control him…with peanuts? Nope!

When an elephant is very small, they tie his leg with a very large chain connected to a stake in the ground. That elephant calf pulls and pulls against the unmovable, unbreakable chain and becomes discouraged. He’s just no match for that chain’s strength and is mentally bound by the memory of an unbreakable barrier. When the elephant grows up, the trainer trades the large, unyielding chain with a very small rope, one the now-grown elephant could easily break. Yes, this massive mammal is now held mentally by a carefully placed engram. This is how we become bound as well. 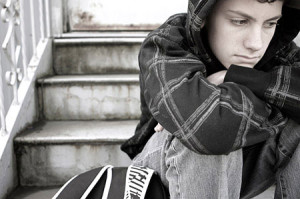 As unsaved youth, our struggles build engram s in our souls. We didn’t have the power to break free because we didn’t have the saving power of Jesus. We pull and pull against insurmountable obstacles. These bondages tell our inner child we will never be free. We build faith in the obstruction. So when we come to Christ, we have to leave our false confidences and place faith in His Blood.

It’s a big work. And learning the scriptural power of the Blood is a huge part. When you know what was purchased through the Blood, then you can apply the Blood to your life. Faith comes from hearing, that is, hearing the Word of God (Romans 10:17). So learning the truth about the Blood is paramount.

Now that I have access to the arsenal given to me by Christ in His Blood, I can proclaim the scriptural realities over my engrams. Christ’s Blood is the life of my Creator. My partaking of His Blood is infusing me with His Life! It does call for Faith, but my beliefs in the power of a shackle can be radically broken through applying the precious Blood of Christ.

*I took notes on Prince’s message and I’m willing to share them with you. The notes aren’t personal, they’re a list of the Scriptures he uses as well as all the confessions he speaks on the Blood. I found them to be really helpful while following along with his message. If you want them, simply ask in the comments and I’ll gladly send them to you.

May I please have the notes,too?

Thank you for sharing. Would you send me the notes, please? Thank you!

John, could you send me your notes from the message? Thanks!

Bless you and thank you, John! May i have the notes too?

The elephant allegory is really brilliant! I would be very grateful to receive the notes too! Thank you!

I like that word-engram. I would also like the notes if you please. Thank you Love you

Life-giving revelation, John. Thank you so. I would like the notes as well.

John, I have been musing over your thoughts today. The elephant allegory is just amazing. The whole of it is blessed.

Yes I would love the notes. The blood seems to be a big part of my walk at the moment so will see if I can find Derek’s message. Thank you John and bless you.

I also would love the notes you said you’d share…thank you John! Have you ever heard of the book Deep Relief Now by Dennis and Dr Jen Clark (Full Stature Ministries) ? I’m so enjoying their ministry. The Lord really used Martha’s teaching last year for a lot of deliverance for me. Now I’m getting the “next” layer off with their material and being transformed.I have wanted to share this with you guys for a while now…That long standing issue in my emotions, well, Jesus has taken it away…He is so Good!! I love Hymn so very much! Bless you… Read more »

Pearl, I am so grateful to you for sharing this book with me. It is so simple, yet so powerful. I have used the “God tools” they describe to help a devasted young mother work through guilt issues after the death of her precious baby daughter.

Wow! Thank you and yes I would like your notes ~ Blessings ~

John, I did not know the word “engram” until reading your post. I remember about 30 yrs ago hearing Bill Gillham teach on these patterns and calling them old green highways in our brain. Whatever they are called, they need to go! Thank You Jesus for the soul cleansing power of Your Blood. I’d be very grateful for your notes on Derek Prince’s teaching John.

Don’t know what happened to the other one.
But I corrected the link above to a live one.
Sorry about that, it’s here: https://www.youtube.com/watch?v=8Tu6bxcCqvs.

Thank you for your discussion on the Blood–powerful and insightful! Please share your notes with me, and thank you for making the offer!

Please, do send them.

Please send them to me John, this is also an amazing post. Would love to have your notes also. Bless you
for sharing these precious insights

Yes John, I’d like them. Your last post on the blood was really helpful to me and I’d really like to listen to this message. Thanks. P.S. Amazing insight about engrams.