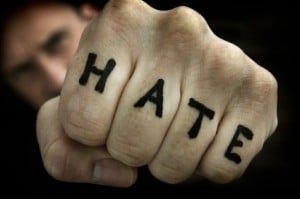 To hate or not to hate…

There is therefore now no condemnation to them which are in Christ Jesus, who walk not after the flesh, but after the Spirit.
Romans 8:1 KJV

Have I believed this? Have I received this word as the truth of life in the kingdom? The Holy Spirit has just revealed that in my heart of hearts, I have not. I carried the laws of the world in my heart, and the Lord loved me enough to expose it and crush it – hopefully forever. The law of the world demands punishment and atonement. For believers, Jesus IS our atonement. His death satisfied the law and purchased our freedom. So how and why did I go back to the law of mankind? I hated.

I hated someone and put myself in the hands of hatred. It’s really that horribly simple. All it took was hating someone and down I went.

Called to Hate Evil Only 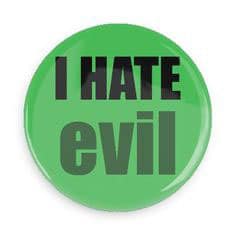 The fear of the Lord is to hate evil; Pride and arrogance and the evil way and the perverse mouth I hate.
Proverbs 8:13 NKJV

It is wisdom to hate evil, NOT the evil person. A clear distinction is made here and for good reason. God deals with evil people very differently from the way humanity deals with them.

If thine enemy be hungry, give him bread to eat; and if he be thirsty, give him water to drink: For thou shalt heap coals of fire upon his head, and the Lord shall reward thee.
Proverbs 25:21-22 KJV

Maybe this is where the phrase “kill them with kindness” comes from, but that is not how humanity deals with an enemy. (This isn’t the only way that God suffers an enemy to be dealt with either, just an example.) Jesus said, “Turn the other cheek,” and I trip over that one, too. But I think that I “tripped” because I never fully surrendered my right to hate. 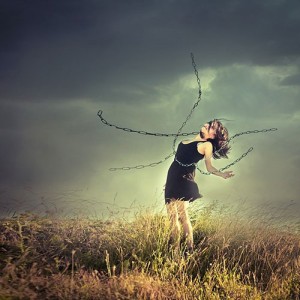 Then Peter came to Him and said, “Lord, how often shall my brother sin against me, and I forgive him? Up to seven times?” Jesus said to him, “I do not say to you, up to seven times, but up to seventy times seven.”
Matthew 18:21-22 NKJV

This isn’t my first go-round with this verse, but my experience with it has deepened. If you don’t find it nigh unto impossible to forgive one person seventy times seven times, then you’re either an angel or dead. And me? Well, I didn’t fight the temptation to hate. I had the grace for it, but I just didn’t do it. After several go-rounds with hideous offense after hideous offense, I just plain jumped into hatred with both feet.

I repented and forgave and asked for forgiveness, but hating becomes a habit when once you start. It walks into your heart without knocking or wiping its feet and starts eating your food and sleeping on your couch. Pretty soon its all-out war just to get that hate back outside.

I approached hatred as ‘understandable’ and ‘unsurprising’ rather than the corrosive acid that it is. I gave myself permission to hate just a little, because I believed that it would be all right. I was wrong in every way and I have paid dearly for my arrogant rebellion.

God never speaks idly. When He says that the stove is hot, then I shouldn’t touch it. But I did. And Love let me burn my fingers to spare the whole of me. I do not KNOW anything. Not now, not ever.

There’s nothing benign about hatred. It takes the inch you give it and throws a mile-high party. There’s no safe place to hate someone, and no reward of any kind when you do. The way of the world is to hate the vessel, but hate never brought anyone through to light and life and Love. And hate never heaped coals of fire on any head either.

May the Lord burn and crush the law of the world out of my heart wherever He finds it. May He keep me in the quiet humility that comes with being forgiven so much. May I be filled so completely with His love that hatred can’t even look in the window.

Let there be no more resentment, no more anger or temper, no more violent self-assertiveness, no more slander and no more malicious remarks, Be kind to each other, be understanding. Be as ready to forgive others as God for Christ’s sake has forgiven you.
Ephesians 4:32 PHILLIPS

“If you don’t find it nigh unto impossible to forgive one person seventy times seven times, then you’re either an angel or dead.” Jennifer, (I hope I’ve told you this already) but you are one of a very few people that can make me laugh and cry at the same time 🙂 This post is excellent! I always appreciate your rawness, but for some reason, for me, this one felt like your heart was put on a table, and I could touch it. I read it and read it again. And coming toward the end, I felt like I was… Read more »

Oh my, Jennifer! What do I do with this post!? Print it out and glue it onto my forehead?!

To see that what I’m drinking is corrosive acid is nothing short of a miracle! But, as crazy as it may be, letting go of that poison has not been my natural reaction…

Wow, thank you for your honesty. I’ve walked down exactly the same trail lately; literally walked DOWN. After endless assaults and thoughtless acts of always the same kind I allowed myself to be angry at one certain person. As this person is very consistent in how they deal, my anger became consistent too. In other words, I started to hate, for my anger was not about an action, it was about the person doing it again and again. It didn’t take long till I found myself strangely impatient all time and in a general not so great mood…my hatred, the… Read more »

Amen. I liked the Phillips rendering so much… Those words of Paul really stand out through that version. Those words spear my heart. I may not have a high temper (like you may have, Jennifer), but hate finds its way and place and I think it is completely independent of temper. You may have a soft temper and anyway be living in hate. You can “softly” hate too, and I don’t think that’s better than “violent” hate. Probably is much worse. These days are days of great trouble on the earth… probably to make stand out God’s love and patience… Read more »

Thanks for sharing Jennifer, you are more than an overcomer. The Lord is always loving, watching over and protecting His beloved to keep us from evil. Behold His covenant instructions according to Psalms 37!

oops BURN I meant to spell

Oh guilty, i join you in your prayer ……..”bun and crush wherever HE finds hatred……I too have been forgiven so much and need so desperately to be filled completely with HIS love.”
Thank you, bless you for sharing HIS truth to this hurting world, (mine at least)