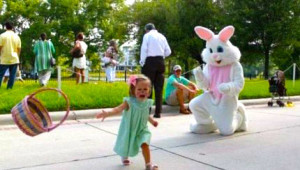 I have 6 nephews and 2 nieces, all under the age of seven. On Easter Sunday, an attempt was made to get a picture of them. The goal wasn’t pastel perfection in crisp, new church clothes, nor was it a smile on every cherubic face. The goal appeared to be so lofty as to reach for 8 visible tots facing roughly the same direction. This ambitious goal was not met, but we do now have photographic evidence of what a jailbreak run by little children would look like. It was quite a picture of the human condition actually. We are told what to do, so we know what is right to do, but when we don’t want to do it, we try to escape.

One of my old bosses used to say that some people only worked well when cornered like a rat and hounded like a dog. Sad truth? To this day, I wonder if he was talking about me, because with that level of motivation I could come close to being a success—right before spontaneously combusting. I don’t think that it’s appropriate to use my boss’ delightful cliché to describe child rearing, but it isn’t an unknown method. And plenty of adults, myself included, have attempted something similar when trying to wrangle a positive performance out of our hearts when they’d rather escape.

“How can I lock away this perpetual discontent that keeps popping up? Where is the place from which escape is impossible? Cornered like a rat and hounded like a dog? Perfect! Now I’ll be okay.” Except that it never works like that. We don’t work like that.

Then Jesus called a little child to Him, set him in the midst of them, and said, “Assuredly, I say to you, unless you are converted and become as little children, you will by no means enter the kingdom of heaven.
Matthew 18:2-3 NKJV

If you’ve ever had the opportunity ­­­– the gift, really – to spend time around a group of little children, you know that the only real difference between them and adults when it comes to sinfulness is a lack of guile on the part of the kids. Little children are every bit as willful, rebellious, selfish, mean and able to lie as any grown up. They just lack the “polish” of adults.

But there are differences other than sinfulness between the littles and the bigs. Little children have neither scar tissue nor fortresses coating their hearts. They are vulnerable and openly, unashamedly needy. Quick to cry, quick to smile, quick to receive something they need or want—all of these are necessary for successful training and discipline. But until we’ve repented unto being born again, there is no truly successful training or discipline. There can’t be when the foundation is unrighteousness.

Spirit-led repentance is the only thing that enables me to truly turn and become a vulnerable, needy child. And only the precious, priceless Blood of Jesus Christ gives me a new foundation of righteousness so that God’s training and discipline of me is successful and bears fruit. I cannot keep me. I cannot fix me. I have tried and tried and tried. And I have failed and failed and failed. But that is my insanity, not God’s.

God didn’t stack the deck against me. He doesn’t expect me to solve myself when Jesus is the Solution. He doesn’t ask me to keep myself when Christ is the Good Shepherd. And He’s not disappointed that I can’t properly clean myself up when the Blood is the only substance in the universe that can make me spotless. Cornered like a rat and hounded like a dog is a wretched substitute for actual, permanent transfiguration.

*If you still haven’t read Kingdom Children by Martha Kilpatrick, then you’re missing out on some of the clearest teaching and revelation of what it means to become a little child.

“And He’s not disappointed that I can’t properly clean myself up when the Blood is the only substance in the universe that can make me spotless.”
Am I the only one that knows this – but just in their head? I’ve heard Martha in one of her teachings ask, “Have you stopped trying to be a good Christian?” Sounds ironic but sometimes it seems like a chore to stop trying. . . where’s the ‘rest’ in that? Now that I think of it, even trying to rest is an oxymoron. So much knowledge; so little faith.

I truly enjoyed your post this morning Jennifer. We have had up to 9 children and grandchildren visiting in our home this past week and your comments made me smile and nod in agreement. This sentence, however, is the one that grabbed my heart: “He doesn’t expect me to solve myself when Jesus is the Solutuion.” To that, I say a hearty Amen!