Now all things are of God, who has reconciled us to Himself through Jesus Christ, and has given us the ministry of reconciliation, that is, that God was in Christ reconciling the world to Himself, not imputing their trespasses to them, and has committed to us the word of reconciliation.

Now then, we are ambassadors for Christ, as though God were pleading through us: we implore you on Christ’s behalf, be reconciled to God. For He made Him who knew no sin to be sin for us, that we might become the righteousness of God in Him.
2 Corinthians 5:18-21 NKJV

I was reminded of this passage of Scripture while reading John’s post yesterday. Years ago, when I first read these verses, I wondered why it was necessary to have a ministry of reconciliation. I never followed up on that idle thought until the end of John’s post pricked my memory. He said, “I think it is all-too-common to accept our spiritual separation from God as normal.” Of course! That spiritual separation was my normal for a very long time, and it’s not hard for me to default to that mode without even thinking about it. However, being reconciled to God and in perfect union with Him is my new reality, my new normal. I just have to fight to believe it as such.

Reconciliation and the New Believer 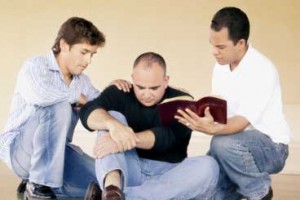 “The first thing a new believer needs is a total and thorough breaking down of his past. Why did the Lord say, “Unless you turn and become like little children, you shall by no means enter into the kingdom of the heavens” (Matt. 18:3)? This means that our past living was wrong. We lived in vanity, and our former days count for nothing! We all should have to have a fresh start.

“Everything of the past needs to be torn down and removed. The perfection of a new believer consists of the tearing down of his past item by item. If a man is saved at the age of forty, perfecting means a total destruction of everything that he has acquired during his previous forty years. Many people regret their sins but not themselves. We pass from death into life. We are not putting life into death. The building up of a new believer consists of identifying the things to be dealt with, the things to be eliminated, and the things to be added. Everything should be judged by the biblical standard.”

This is why I think that evangelism divorced from discipling new believers is a recipe for the weak and compromised churchlings that run around pecking each other’s faces off for the entertainment of the world. Discipleship has become one of the most misunderstood Christian endeavors out there. New believers are being petted and feted rather than walked with love through the razing of their past. Discipleship is now treated like a Jesus-centric offshoot of Big Brothers Big Sisters of America. It is SO MUCH MORE than that! Discipleship is the ultimate ministry of reconciliation.

To Disciple is to Reconcile 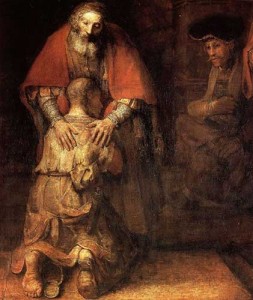 “I think it is all-too-common to accept our spiritual separation from God as normal.” And the worst part is that we don’t even see that that’s what we’re doing sometimes. Why? Maybe because we’ve kept something from our past that should have been destroyed: a way of thinking or feeling or doing or dealing. To be discipled is to submit to heavenly eyes that see what I can’t and to receive the word of reconciliation from the one who loves me with the love of Christ. It is a relationship born of the consuming fire of God’s love and a commitment beyond mere mentorship. And I’ve watched people throw it away because they wanted the petting and feting instead.

I don’t want spiritual separation to feel normal. I want to be so steeped in the reality that I am now one with the Lord, that it is an agony for me to step out in independence. I thank God for every word of reconciliation that comes from the beautiful woman God called to disciple me. Without her ministry of reconciliation, I’ve no doubt whatsoever that I would try to pour “life into death” and then wonder why that life wasn’t fully victorious.

Just beautiful, Jennifer. I so enjoyed John’s post yesterday and yours today on this subject of reconciliation! And you are so incredibly blessed to be discipled by such a beautiful woman of God! 🙂 I know she burns with the consuming fire of God’s love!

Jennifer, I thank God also for all of the words of discipline that brought me to want HIM more than my own way. HIS love through that “beautiful woman” her teachings and these posts, podcast, c/d’s, conferences have saved me from the pit of HELL and I sing Hallelujah. I even had to be told that I was reconciled because of all the years in the wilderness……OH what a wonderful Savior…..the sacred HEAD now wounded. I have been hearing a song on Enlighten radio, “preacher tell it like it is” and you all certainly do that!!!!! All Praise to my… Read more »

Excellent and timely Word.
I have been hearing the same Word. Jesus and the Apostles are our example of true discipleship. And that is far more intimate than meeting once or twice a week. Our culture of independence has so skewed this concept.
Making disciples is just as important as preaching the Gospel.

“To be discipled is to submit to heavenly eyes that see what I can’t and to receive the word of reconciliation from the one who loves me with the love of Christ.”

“Delight yourself also in the LORD, and He shall give you the desires of your heart.” Psalm 37:4

To be discipled by one of His choosing is one of my hearts deepest desires.