I have been writing about pain and suffering in my last few posts. Most of us run from pain like the plague. We are designed to react to pain. It isn’t like any sane person prefers pain as a state of being. Well, today I saw the news about the 21 Egyptian Christians who were executed by ISIS. They were marched out in Libya to the shore of a beach and beheaded. Absolutely horrific!

Over the last few months the News has reported on many murdered in orange jumpsuits. Each of these executions performed by ISIS is disturbing, to say the least. But as it relates to these 21 Coptic Christians, I have a little different view. These were martyrs. Martyrs (witnesses) because they stood as Christians in a Muslim land. But get the word, martyrs! For these 21 souls entered a place that is enviable. I wonder what would be their response if you asked each of them now, was it worth it?

Then I saw thrones, and the people sitting on them had been given the authority to judge. And I saw the souls of those who had been beheaded for their testimony about Jesus and for proclaiming the word of God. They had not worshiped the beast or his statue, nor accepted his mark on their foreheads or their hands. They all came to life again, and they reigned with Christ for a thousand years. This is the first resurrection. (The rest of the dead did not come back to life until the thousand years had ended.)
Revelation 20:4-5 (NLT)

“Be faithful in the face of death and I will give you the crown of life. Let every listener hear what the Spirit says to the Churches: ‘The victorious cannot suffer the slightest hurt from the second death’” (Revelation 2:10 Phillips). The Crown of Life is the reward to these witnesses—the crown that they get to cast at Jesus’ feet as His living reward. It’s the reward that Christ receives for living His life through you. Their lives were the talents in which they were entrusted and are now able to give back to Him, with double the return. “The master was full of praise. ‘Well done, my good and faithful servant. You have been faithful in handling this small amount, so now I will give you many more responsibilities. Let’s celebrate together!” (Matthew 25:21 NLT)

So what I saw as a horrific act, purposed to intimidate and frighten, was actually their door to incredible Reward. These 21 martyrs were given the ability to give their Creator the highest honor—their lives. I’d have screamed and hopefully protested in an attempt to prevent this atrocity, but what would they have to say about that now? Would they have wanted me to halt their witness?

Now, I don’t say this to promote these acts or additional acts like these, but in the grand scheme of things, wow! These 21 men, whose martyrdom was broadcast before the whole world, had a more significant Witness to this event. This Witness has more important Eyes, which saw and rewarded their sacrifice with a Reward beyond earthly description. 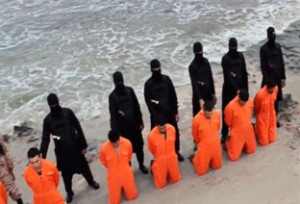 The names of the slain Christians

Thank you, John. These men definitely did not become heavenly-minded overnight.

Praying their families may have this comfort. Thank you

Worthy is the Lamb !

Thank you for honoring these men in this manner. It is a blessing to see it in a different light….the Creators light.

We honour each of them, until the return of the (glorious) Christ and the crown and (new) name each will receive.