Dustin Hoffman:
“There are too many interesting woman I have not had the experience to know in this life because I have been brainwashed. And that was never a comedy for me.”

I watched an interview the other day with Dustin Hoffman on his experience with the movie Tootsie. In it I connected with what he said. Now I don’t know Dustin, or who he is as a person, but I have life experience that resonated with his words, and I’d like to share it with you.

When I first started to receive healing of my past, I had to go through a work of forgiving women. I’ve had a line of Jezebel-type women gnawing at my soul for many years. It even seemed at one point that God Himself tied me to them. I am sure this was to force me to rise up rather than lying back as an Ahab.

I left these experiences with many judgments against and anger towards women. Especially strong, overbearing ones. I loved women and enjoyed them, but I didn’t have a view that God wanted me to have.

So after forgiveness and healing of the wounds inflicted on me, I came to treasure and cherish women. My view was transformed, to such great appreciation for the difference and uniqueness of a woman. I was awed by her way of thinking and how she responded to situations. Women became fascinating to me.

When A Man Loves A Woman 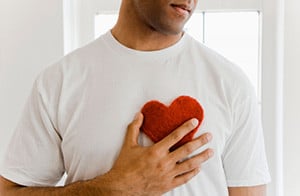 I remember one day I was in a drive thru lane at a Hardee’s. I placed my order and was proceeding to the pick-up window. When I arrived, I was shocked at my response to the attendant. She was a somewhat unattractive looking, mildly overweight, middle-aged woman. This was a woman you would never notice in a crowd. She was just any woman. For me, there was nothing distinguishing about her other than she was a woman and that God was moving on my heart about her. As I waited for my food, I just experienced waves of love for her. She was utterly fascinating and completely captivating to me. I know she felt it, I could see it in her face. It wasn’t sexual in nature; it was just complete cherishing. I celebrated that she was in my world, the world where God made her.

It’s been years, and I don’t remember now exactly how she responded, I just know she did. She lingered and asked me more questions about my order than was needed.  Beyond that, I can’t recall the response. After I got my food, I pulled away leaving her to her life.  What this revealed was my heart transactions with God.  He had effected change in me.

So in Dustin’s interview, he states that he missed many exquisite women because they didn’t fit a stereotype of attractiveness.  Because they weren’t “Barbie,” they weren’t worthy of attention or time. It is a tragedy that we could miss something so special just because it doesn’t fit into our mold of what’s desirable.

I hate that our world is this way, but maybe there is another view of this worldly fact. Maybe God, the Creator, jealously desires the beauty some women possess to be His own to enjoy. Maybe He wants to only expose their beauty with those He chooses to share it. Now I am not excusing the attitude of our world as “just God’s plan,” but I am saying He is sovereign. I’m also saying that often what He finds desirable is not what I think is. And maybe He is jealously withholding from soulish spectators, something He favors.

We humans are so limited in our choice of flavors and so dogmatic that our choice be THE ONLY choice. God’s palate is so much greater than ours.  But I think He does expand the taste buds of His children as they follow in His steps.

See the Interview with Dustin Hoffman.

John, I just watched the interview with Dustin Hoffman and then the video of Jonathan and Charlotte. Amazing insights; I am covered with goosebumps and the tears of repentance are flowing. Thanks again for provoking my thoughts.

So after this blog posted I watched a random video, I don’t know how I got there. All I know is my internal reactions to it made my point exactly. Check it out. I hope you haven’t seen it before, so you can respond naturally.
http://youtu.be/zv2Fbk47x8s

The link is a perfect wrap up of your thoughts.

I had seen it before, but I was moved by it once again. The first time I saw it, it was quite an experience by itself. It is amazing how low his self esteem was, but he was only seventeen then. So young. Most tenageers are low “self-esteem” at that age too (I was), and you can feel his fight all along the pace.

But when he goes at it… Heaven is revealed through! As the other guy says “I have never heard such a (xxxx) in years.”

Ya my reaction is…so what if He didn’t even sing good…would that make him even less worthless….NO …and it makes me mad at the way we treat people…the way I look at people…and even myself…when I lost tons of weight one time…it was then that everybody noticed me…and paid attention to me…It made me think, no one liked or loved me before I got thin….I was the same person…inside…Am I somebody now…NO I was His and am His regardless of my weight issues…I am sooo glad God looks at our hearts and not at the outward appearance…David was not even… Read more »

Very interesting insights on how we often tend to stereotype women, and women can readily do the same thing toward me. The problem is how with youthful immaturity we tend to evaluate others only on the basis of physical attraction or “success” or potential “success” in life. Also, we have all been manipulated and used and thus tend to become cynical or overly suspicious of others. The world (and relationships) have been so badly damaged by sin and the satanic influences of “the god of this world”, satan [who still holds sway since Eve’s deception and Adam’s fall]. THE KEY… Read more »

For many years I had a motto “all men____”. It is true, my perspective marred by my experience was a choice. I pray that I continue to see, become and bring out that which is precious in our Father’s creation, male, female and in all of creation.

There is a little story connected with this saying of you. Maybe in other ocassion I will tell. It is a story of an insignificant woman who was a living portrait of your saying… not by cherishing another insignificant woman, but by taking care of a thirsty unsignificant dog.

God cares even for an insignificant thirsty dog nobody pays attention to, how much more will He not care for those made into His image.

The eternal question… does God care?

Thanks for sharing your heart insight. Do you recall that in Jeannie Guyon’s book she relates the small pox (I think it was) that scarred her lovely face? This must have been an unbelievable loss to her personally. But like your story suggests, Gods jealous love of intimacy for her. Just thinking…