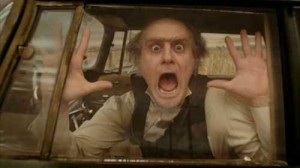 Last week, as I pulled up to a bank’s night depository, a man screamed out of his car window, “They’re closed, you #%^* idiot!” I usually drop our deposits off after hours with no problem, but that day, totally unprovoked, I had a man scream at the top of his lungs a slur against my intelligence.

I will discuss in an upcoming post how the love of most will grow cold, but with this comes the increase in rage. Rage will just come out of nowhere. Delay a second too long at a traffic light and it will become an opportunity for someone else to rage. Couple this with love’s diminishment and it makes for some pretty fiery anger. An element can’t decline in one aspect without it rising in the opposite. We don’t live in a vacuum. When one side of an equation declines, the other side rises.

This particular scenario at my bank, with this fine young gentleman, is something I am seeing more and more. Truth be told, it’s scary to me. I don’t enjoy the decline of our society in any aspect. I don’t like the bestial nature of our humanity coming to the forefront of our living experience. But we see the media reporting on it almost daily.

A Visual Picture of Abuse

Then I saw the below video and remembered how many people respond to a threat or fear. We bite, we express our anger, and we respond bestially. As I wrote in my post about strife, the continual pressure on us is disheartening. When fear replaces hope, the threads and fabric of our society quickly unravel. Jesus is the only thing that actually holds us in check, because in troubled times, human goodness quickly falters.

Revelation of Being Called an Idiot in Anger 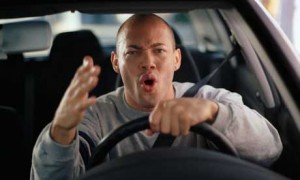 So today’s post isn’t as much a spiritual revelation but a social commentary on my musings. I have been on this for weeks and am looking for Christ’s response in me. Though I know these pressures on us are ordered to call us to gaze at Him with all our hearts, there’s still another element at play. I am a witness. I am called to bear His burden for my world and reflect His image for those who hate Him. I don’t get to escape a high-pressure situation just by gazing at Him; I have to be Him to this world. And that doesn’t necessarily mean I have to face it with a smile. I may just have to receive with Him the hatred coming from those who believe He is not good.

Here’s my parting thought. When I am His, I’m not immune to the hatred of this world. Quite the contrary, I am a magnet for it and intended to bear it, by leaning on Him. I could take it personally, but when I am His, it’s no longer personal. I can surrender to Him, bearing up under it as His vessel. Did Jesus not purchase me as His own? Yes, He did! And now He must bear His own reproach from the world I live in.

This was really meaningful to me , John, because it happened to me almost exactly the same last week–! And I said, Lord, what was the meaning of this?
Now here is His answer through you all.
Abide in Him, abound with love.

i am an er nurse – and i have seen many forms of rage- from having to wait too long to be seen for a minor injury to the untimely death of a child- it has been a bumpy journey, but i have come from taking it personally to surrender-and under that shelter, He reminds me i an His and can bear the anger– and tammy- you are so right- the loud cry is the whisper–

Wow, this is a powerful video of how love overcomes fear. I may use this in my parent/teacher training’s. I verbally use an example of how a wounded dog may try to bite the person attempting to help them. God made our bodies to respond to love when in fear. The hormone Oxytocin is the hormone that allows us to feel love. Stress hormones when released stop the flow of Oxytocin. When we are loved it brings healing. This is so fascinating to me because it is one evidence of how God’s command to love brings real physical healing.

Yes, John. Thank you for bringing this up. Maybe these days these words are more factual than ever:

“We have no fight against flesh and blood, but against the powers of the air…”

And those powers are raging against the Bloodline of Jesus, because time is short.

Oh Thank you JOHN, this has so blessed me and “AMEN, TAMMY!!!!!! I had an experience like this in the APPLE Store………hope its not too late to pray for the angry man’s spirit. LORD, bless John for hearing you and sharing you with this angry,bestial world to reflect YOUR image.

What a privilege to witness the many ways He woos us through you John! God is so COOL! The variety of folks you’ve shared about lately…”God’s Love for A Transgender”, “It’s tough to live in this world with a heart.”, and even “Great Big Wooley Booger”, all extraordinary creations! HE never leaves us board that’s for sure! “I have to be Him to this world.” “…I am a magnet for it…” And God places those in desperate need of prayer before us. Without what would seem such a rediculous display of his condition I don’t know that I would have… Read more »