I have learned a secret. It’s a secret of “facing life.” I have learned this secret before. Many times. And it’s the difference between the despair of life and joy of life.

The secret is open and available to every child of God. The issue is you must really, deeply need this powerful transforming secret before you see it.

On Friday, John wrote about despair out of a very conscientious life. His responsibilities are vast and he receives those burdens as God’s purpose and will. He takes them on gladly. The problem is living it out in the practical. Not every believer has the problem of despair from responsibility. Most of us suffer from the despair of not getting our own way…or the despair of unconquered sin.

Anyway, back to the amazing secret.

The Secret Lie We Need to Recognize

I was telling Jennifer my discovery of a major but very subtle lie of the enemy, one that will destroy us. And she said, “It’s easy to forget how cunning and subtle the enemy is.”

The lie is so cunning that it seems to be both true and my own thought. Here’s the lie: “Life is too hard. MY life is too hard. I can’t do it, it’s too much.” It’s a very dangerous lie because it is so natural to our thinking. We are wired to think it from Eden where the lie began.

Then the enemy has won because you want to give up. You have sided with Satan that God is not good. How very common this process is and how tragic! So many fall and fail because of that little persistent thought from hell.

God always wants to give us an easy way, but we take the hard path and its rocky crash! God cursed the ground so Adam would have to struggle and then he would seek God.

Cain knew that but still he wanted to work to please God; he wanted the hard road. We take either the hard or the easy road and both end up unbearable. Cain, furious with God and unable to kill Him, took out his rage on Abel and killed him instead.

The Secret Behind Our Burdens

It’s always been said, “God will not give you more than you can bear.” Oh, it’s not true, He does. A. B. Simpson said that God put the whole world on his heart. He gives you what only He can bear – in you, for you, through you.

I have been suffering from exhaustion for six months now. My spirit burns with God’s passion to write and intercede and disciple, but my body won’t cooperate. I have enormous responsibility and I gladly want to take hold of it, but my body just cannot work. (Let me also say that my Lord has given amazing help to me. And when I needed to speak or write, I’ve had supernatural power to do so.)

A dear one said to me, “If you could just accept where you are.” And I realized I was trying to accept it and couldn’t. I had surrendered to the Lord and the Spirit more than once—many, many times. I had feebly thanked God for this condition, but after that word, I began to vigorously thank Him for the weakness and ask Him to give me the total acceptance I needed.

Oh, the Father is so wonderfully sovereign. He sets us up to desperately need the answer He longs to give. Otherwise we will never seek and never knock! 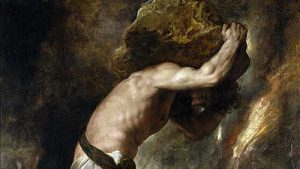 The answer started to unfold from this verse: “For as a man thinks in his heart, so is he” (Prov. 23:7 NKJV). Such a profound verse. I am formed by my own thoughts. I become what I think. And I began to think about my thoughts and God’s thoughts about thoughts.

I searched the Scripture and found the following:

The mind of sinful man is death, but the mind controlled by the Spirit is life and peace.
Romans 8:6

But we have the mind of Christ.
1 Corinthians 2:16

And be renewed in the spirit of your mind…
Ephesians 4:23 KJV

I began to see that the problem was in what I believed, what I thought about over and over. I had listened to the lie, but I have a huge life of blessing. I have a 45-acre farm that is now my full responsibility, an international ministry, a number of disciples, and a fabulous family of 11. Because I was overwhelmed and tired, I let in the lie that “this is all too hard.” And I was utterly discouraged.

The Secret to Facing Life

I remembered a verse from my early days, a verse from the King James: I have learned, in whatsoever state I am, therewith to be content (Phil. 4:11). I had always thought the goal was just to be content in good times and bad situations. So I looked for the verse in several translations and the ‘heavens opened’…

In the Amplified Bible, here is Philippians 4:12—

I know how to get along and live humbly [in difficult times], and I also know how to enjoy abundance and live in prosperity.

In any and every circumstance I have learned the secret [of facing life], whether well-fed or going hungry, whether having an abundance or being in need.

Just to make it simple, this is the ESV:

I know how to be brought low, and I know how to abound. In any and every circumstance, I have learned the secret of facing plenty and hunger, abundance and need.

There is a secret, more than contentment, a secret big enough for all of life’s happenings. And there was joy in it! And I wanted that secret. More, I was desperate for the secret of “facing life,” in every situation and circumstance.

NOTE: I just recorded the Message of the Month for August, so if you want more on this amazing secret, you’ll want to hear it. It will be available on LivingChristianBooks.com in the next couple of days.

Not trying to be critical…but, isn’t it Proverbs 23:7?

Thanks for catching that for us!! Bless you Lynn

Dearest Martha, “I searched the Scripture. . .” I had to pause right there — if I were in the physical state that you are, presently, would I have taken the time to search the Scripture? I hope so. This is a testament, Martha — always listening for the voice of God. And He ever refreshes you with His answers and His grace to receive, as you sow into our lives. What an encouragement and inspiration to be this broken bread and poured out wine that He displays through you! All of the scriptures you cite were so relevant, as… Read more »

Dearest Pauline,
You are always so encouraging and receptive to HIS Spirit!
Please where did you see a film of the life of my hero, Vanya?

Martha, I sent the link to your email.
Love

I spent long years in basically fighting my life; I felt “being lived” by circumstances, demands of the moment or the choices of others and I hated that I hardly had any influence on the way I lived. Then you, Martha, opened my eyes to His Love and His Sovereignty. Step by step my tight grip on “my” life was loosened. I learned to let go of rebellion, which it was, of control, of fear. I am looking forward to learning what you heard from Him; trust at least was part of my secret in this direction, and it opened… Read more »

OH my Martha, i am weeping for believing the lie, not that all of my life is hard but some parts are just crushing. I saw immediately a secret for me though, i take on responsibility that is not mine at times. Can’t wait for the Message of the Month to arrive not just for myself but for others in my life. May HE continue to give you HIS secrets that you so bountifully share. Blessings from HIM on your weakness and your time..
In His love…..abounding toward us.