Yesterday I began to indulge a serious pout. Indulge is an important word in that sentence, pivotal even. It wouldn’t be true to say, “I began to pout,” because that’s too clean. I indulged a pout! I was resisting my circumstances and angry at God for the circumstances and I decided to indulge a good pout over the whole thing. An hour in and the Spirit sent me to My Utmost for His Highest. Here’s where He sent me (from My Utmost for His Highest, March 7):

Yet amid all these things we are more than conquerors and gain a surpassing victory through Him Who loved us.
Romans 8:37 AMPC

The bedrock of our Christian faith is the unmerited, fathomless marvel of the love of God exhibited on the Cross of Calvary, a love we never can and never shall merit. Paul says this is the reason we are more than conquerors in all these things, super-victors, with a joy we would not have but for the very things which look as if they are going to overwhelm us.

The surf that distresses the ordinary swimmer produces in the surf-rider the super joy of going clean through it. Apply that to our own circumstances, these very things – tribulation, distress, persecution – produce in us the super joy; they are not things to fight. We are more than conquerors through Him in all these things, not in spite of them, but in the midst of them. The saint never knows the joy of the Lord in spite of tribulation, but because of it. “I am exceeding joyful in all our tribulation,” says Paul.

Undaunted radiance is not built on anything passing, but on the love of God that nothing can alter. The experiences of life, terrible or monotonous, are impotent to touch the love of God, which is in Christ Jesus our Lord.

Can a Pout be Shaken Out? 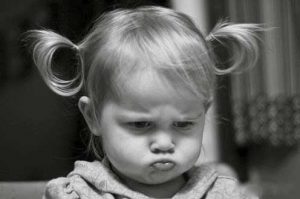 At first I was pretty annoyed with this passage. As I was still nursing a serious pout, Paul’s declaration was unwelcome. Maybe Paul was joyful in all tribulation, but I sure didn’t want to hear about it at the moment. If there’s anything more frustrating than being told you’re wrong when you know full well it’s true, I haven’t experienced it. Ugh! Far from defusing my pout, this word was enflaming it. Then it hit me: Why don’t I shake out my pout?

Paul, like Jesus, often leapfrogged from the difficulty he faced to his experience of joy/peace/love etc. We don’t get a blow-by-blow of how he got from A to C, and that means that anything is possible. Maybe sometimes joy in tribulation is an agonizing journey and sometimes it’s a single leap of choice and faith. Who’s in charge of my choice, me or my pout? The sad question of a simpleton perhaps, but I’m fine with that because it broke through the clutter and clang of my discouragement and disappointment. I decided to shake out my pout.

The frustrating circumstances were still the same but I wasn’t. I was clear and undaunted and there was a glimmer of joy that began to grow. I didn’t feel like bowing, but I chose to bow. I didn’t feel like letting go of my frustration, but I chose to let go. And in that moment, my pout ceased to rule me. God was on His throne and I was on my knees. Sometimes it can be that simple and that quick.

May the God of your hope so fill you with all joy and peace in believing [through the experience of your faith] that by the power of the Holy Spirit you may abound and be overflowing (bubbling over) with hope.
Romans 15:13 AMPC

100% confirmation for me…thank you Jennifer, and Oswald!

I love this. Shake it out.

Thank you Jennifer! The solution is so simple and the choice is always ours . Thank you for this wonderful reminder!!

Amen, Jen. Thank you for sharing your choice, and the hope and provision lying behind that choice. That was a good decision all along. “Today we look as through a mirror”, but I believe that these simple experiences as yours are really the “sacrifice of praise” David talks about and God asks of us. Very simple, very child-like. Very “simpleton”. I will also tell a brief story that might complement your experience. Recently, I was looking for something I could not find and I really needed. I spent more than 3 hours looking for it (YEP). They were small and… Read more »

MISTAKE: …AND it was a “simpleton glory”.

I identify completely with both our your stories Sam and Jennifer! This blog couldn’t have come at a better time for me. Thank you, Lord!