Why does He suspend us in faith? God has to reduce our options. No one is going to live moment by moment by choice. It’s too frightening. It’s too unknown. It’s like walking the high wire across the Niagara, in the dark. It’s too risky. We are tricked onto the wire. We are reduced to the tightrope. Everything behind us has disappeared. The road narrows and narrows until there is no road. The way behind us is gone and even the past is gone. Even the light is gone! And we are on the tightrope with no way to go back and no ability to go forward. So you are suspended onto God. 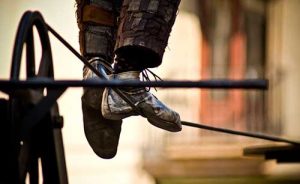 That dependence is a fragrance that impassions God Himself. It is an aroma of flailing human need that is a stimulant to Him. Weakness moves Him to response but is grotesque to us.  It’s so vile we will arm ourselves with whatever we can to avoid this naked state of being, which is really just who we are naturally. But God is entreated by this state we find so grotesque. He likes the vulnerable man on the tightrope without even a pole of balance. We are repulsed by what excites God. We want a whole armory to fortress ourselves against that vulnerability. This is what propels us away from God.

It’s our enmity with God. We are trying to equip ourselves, clothe ourselves and God is trying to remove the armor and the clothing. God goes far beyond securing our nakedness. He wants us to be stripped AND vulnerably strung, hanging out on the tightrope. That is where God wants us. In that place, at that point, is the power that Peter experienced. The very power that enabled him to walk on water. At that moment, the natural laws no longer bound him. He stepped out in utter helplessness to walk on water, to walk outside the laws of nature, above the character of his own humanity.

This is the reason you want to be reduced: you are moved into a different realm. When Peter stepped out of that boat in complete helplessness and utter abandon, he left all that held him up but also all that restricted him. And Peter entered the world of Jesus. When you allow the omnipotent God to hold you up, and dictate your step-by-step movement, you leap into the realm of omni-possibilities. Faith is not demanding that God come to you. It’s going into where He is.

Faith Beyond Law into Omni-Possibilities

When you are on that tightrope, that vulnerable, then you are IN that place of God’s absolute rule. Peter was in that realm but with just a thought, just a turn, just a look back, he left it. That’s how fragile it is, the division between the two worlds, the two laws.

And Peter answered him and said, Lord, if it be you,
bid me come unto you on the water.
Matthew 14:28

This is the genius of Peter. He left the others, he left himself and he left the realm of this earth. He moved out of the physical realm and stepped into the heavenly realm. Peter’s body was in the natural, while his spirit was somewhere else. And his body obeyed the realm of his spirit.

In devastating helplessness, faith is found, when there is nothing else to hold you.

He wants to be our All and Only…

Amazingly scary is this “spiritual adrenaline” called faith. To let go is to die (like Martha said Sunday) and at the same time it’s to be where Jesus is!

I agree. I guess we cannot escape the repulsion and fear that our vulnerability incites in others and the rejection that follows. Maybe it is the only way to be out on the tight-rope alone and only dependent on Him ??

we will do any and everything to keep from going there. Thank you God for continuing to pursue us even when we don’t want You to.

That is such a scary place, being in free-fall and the stripping of all control. But when the clouds part we find ourselves standing on a solid Rock and He is our shalom.