What is the meaning of the “Hurdy Gurdy Man” in Donovan’s popular song released in 1968? Martha and I saw a movie called Milton’s Secret, and that was the closing song. Songs from that time period always have a sweet spot in my heart. The folkie nature of them make them read more like parables and proverbial stories than songs. Think about the songs that move us and make us emote. It is the ones that tap into our hearts and express lyrically the struggles we all face.

Songs like “Hurdy Gurdy Man,” “Cat’s in the Cradle,” and the like bring to the fore truths to make us see reality. It is a gift. It’s similar to when someone writes something and it feels deeply like it was written about you. These songs have that same power. They lyrically communicate things trapped in our hearts and release them to be seen, heard and felt. Like a key to unlock a treasure chest inside us. 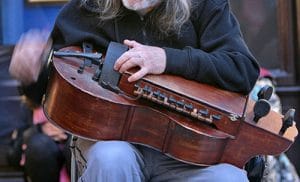 I found a gentleman who described the Hurdy Gurdy Man’s meaning as this: “Song is about a stressed individual unable to break free from the endless thoughts that ring in his head, when the simple sight and sound of the man, his monkey, and squeaky little music box somehow overcome the turbulent thoughts and allow him a brief reprieve.” By the way, the hurdy gurdy is “a stringed instrument that produces sound by a crank-turned, rosined wheel rubbing against the strings.”

These lines from the song struck me as amazing:

Now I know Donovan probably was a hippy, tripping on psychedelics, but I have found that God is continually speaking and using everything at His disposal. Sure, it is all backed and based on the Word of God, but whether it is a Danish oil painting, brilliant stained glass, a movie, or a song sung by a performer, God will speak to us where we are so that we understand His messages. A bit too worldly for you? What about a man who marries a whore to express to Israel the condition of their hearts? God uses what God uses. And we can’t limit Him or we will miss His deep truths.

My Thoughts of the Hurdy Gurdy Man 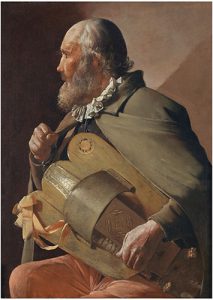 Here is how I make a Jesus – Hurdy Gurdy Man connection. Jesus is always playing His love song. In our crazy world of chaos and confusion, He sings His song of love to us. We are serenaded by our very Creator to choose Him and His Life. His melody is wooing and moving to any who will hear. And those who do are captured and captivated into His great mysteries. I choose that!

I thought of an example of human hurdy gurdy men playing for the Lord of ALL to people in crisis. Well, look at Wallace Henry Hartley and the 8-member band who played the violins on the deck of the Titanic while it slowly went down. They played hymns, and love songs. Wallace made this tragedy a worship service. Each of these band members were hurdy gurdy men for sure. They were men who made more pleasant the inevitable movement of God’s sovereign hand. Rather than stirring up fear and panic, they ushered the passengers into their reality with song. It wasn’t a lulling to delusion or masking the facts; it was an embracing of the truth. A high calling indeed! A refocusing and an invitation to enter eternity with Christ.

The Lord is singing songs of love to us. All we have to do is hear His sweet voice and respond to His beautiful melody. He is continual and ever-present, and always singing of His love.

Speak to one another with psalms, hymns, and spiritual songs. Sing and make music in your hearts to the Lord, always giving thanks to God the Father for everything in the name of our Lord Jesus Christ.
Ephesians 5:19-20

love this! and love Donovan’s song.

Doubtful his intention, as he wrote it at the time he was studying Transcendental Meditation with the Maharishi in Rishikesh, India.

I am not as much interested in what Donovan was intending, I was seeking what God was saying to me through it. I was purposing to listen to the Father’s voice and see if He wad something to tell me. I have truly been amazed at how when the Church won’t speak He uses rocks to praise Him and deliver His messages. Just all food for thought Lisa, thank you so much for commenting.

Isn’t Love the biggest miracle of all?! How can the eyes that acknowledge me also be the ones that consume me!? The arms that embrace me are those that correct me! In my death I find life and He makes me see how blind I am! The One who lets me drown is the One who saves me and makes my path of sin, lead to Him…

It is the biggest miracle of all. Truly He is perfect. We are so safe in His capable arms. Love ya Sandy! Thanks for this addition.

Oh that is perfect. I forgot that verse but it relates perfectly. Do you remember Dennis Jernigan’s version of that verse? It always ministered to me too. The eternal self-existent God… The God Who is Three in one… He who dwells in the center of your Being is a powerful and valiant Warrior. He has come to set you free, to keep You safe and bring you victory. He is cheered and He beams with Exceeding joy and takes pleasure in your presence. He has engraved a place for Himself in you And there He quietly rests In His love… Read more »

Thank you Pamela, I did too.