I’ve recently pondered the general call for “teachers.” When I read Carole’s tremendous story about Rudi the little goat, I understood that there could be something even deeper in it. In a way, we are called to be shepherds to our fellow man, in Christ. Then yesterday, I came to see even deeper than that, and it’s quite radical.*

I went to meet a young woman from my prayer-teams, who is precious to me. One of my jobs in the Prayer-House is to coordinate and oversee the teams, so I meet most of the staff from time to time for sharing. With this particular woman, the fact is that the one who learns from our talks is ME, and yesterday it was no different.

We shared about how much our personal concepts limit God’s move, and then she gave an example. At her church, she happened to meet and talk to a more or less unbelieving guest. She said that she always feels the pressure to use the moment and “evangelize,” but this time was strangely different. She said, “I felt Jesus coming into the room, and with sincere interest and deep empathy, He listened to this woman through me!”

This sentence felt like a slap in my face. I had realized and seen perfectly well that my God is a God beyond any human concepts. But I had never fully understood that the same is true for His Creation: People! After all, we’re created in His image, so we too are beyond concepts.

Isn’t one a shepherd who KNOWS his sheep?

The Eyes and Heart of a Shepherd 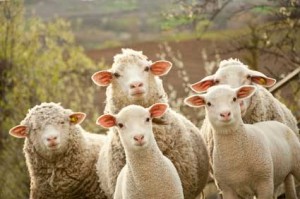 Don’t let me be misunderstood here. A shepherd has a given flock and the animals know him and his voice, and run only after him…there is a duty and a relationship. And there are men and women in Christ who are called to be that for others in a very distinct way of knowing them, caring for them and discipling them. This is not what I’m talking about. I’m really considering how we display the general Shepherd aspect of Christ’s character.

John is just such a shepherd. You can see what I mean when you watch him with people. He shows selfless care for them and a deep interest in their lives. This is true for those who are special to him, like Martha, and also for those he’s just me, though differently. You must have the ability of “seeing beyond the surface” to be able to do that. It takes a deep understanding of the person, which only Jesus has and therefore only Jesus can give.

Can you imagine how different the world might be if we were ready to SEE every human we meet in HIM? It would change everything. And in the Church, this shepherding would grow such a BODY!

*Interestingly, “radical” comes from the Latin word for “root,” so it points to the root of the subject.

So we have stopped evaluating others from a human point of view. At one time we thought of Christ merely from a human point of view. How differently we know him now! 2 Corinthians 5:16. This verse came to mind. It has been a challenge but God’s grace is there to see others in their true identity in Christ. We are not our behaviors or reactions (though it can reveal a conflict within our hearts). When my young twins “act out” it’s because they aren’t even aware of who they truly are. … I am still pondering all this with… Read more »

Dearest Gaby, A very wise woman once wrote/said that she asked Jesus to show her who He created each individual to be. I cherish these words. It is my prayer that with each encounter I am reminded by HIM (not my ideas) of who I am with. As a preschool teacher I spend most of my day with 3 & 4 year olds. During a recent teacher workshop the speaker asked those of us in attendance who had a “perfect” class. I put my hand up…she (kindly) laughed, until she saw I was serious. Then she asked me “How long… Read more »

Oh Gaby, my slap in face sentences: “How often do I actually ask for REVELATION/’ and “can you imagine how different the world might be if we were ready to SEE every human we meet in HIM?” GUILTY. Bless you thank you for giving us the picture of John as he shepherds the flock.
Your post is the evidence that Christ can come into the situation and give the REVELATION immediately when we are open to HIM. Oh what hope and joy you have given to me. THANK YOU, BLESS HER LORD FOR SHARING.