So then it does not depend on human will or effort but on God who shows mercy.
Romans 9:16 HCSB

Salvation and Those Who Are Helpless 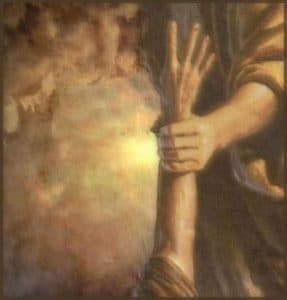 Feeling utterly helpless is part of the process of salvation. We’re cast on His mercy to save us, and that is so much better a place than those who think they are saved because they decided for Jesus. The decision is His to save us, and our dependence on this fact proves to us He is God. This is part of it — Lordship! If He is not Lord, we are not saved. This is proved when we have to surrender to His lordship to be saved. We are saved unto a Lord, and our bowing to His lordship is the seeing that our salvation is His choice. This is so crucial!

The Lord demonstrates to us what it is to be saved. And we need to know a Lord to be saved. If I could tell Him when, where, and how I am saved, then guess what? I’m God.

Lately I’ve had many people tell me they want to be saved. They want it now, of course. “What if I die?!” But for us to be surrendered and helpless in this is to know Him as God, Lord and then Master. This is such a kindness. We can ask Him, we can surrender and bow to Him as Lord, and then we must wait. The fact that a soul is hungering for salvation states to me that the Lord is on the move, but it still depends on Him.

Waiting to Be Saved 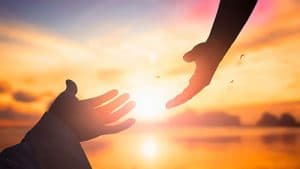 In the waiting, we’re being set up for the actual experience of salvation and not falsehood. And not only the moment of salvation but the living it out, too. I know tons of people who think they’re saved because they chose it. They heard the call and then said yes, so they are saved. But salvation is up to Him. He owes us nothing, but He wants to show us mercy.

It’s like a King in his kingdom. People just don’t go up and tell a King that they’re now gonna be a citizen of his kingdom. “Your kingdom has the best benefits so I am going to live here now.” You’d be lucky to leave with your head attached. No, we may ask the King, but ultimately, He has to invite us to live within His walls and become a citizen. So many of us think it’s our right. The fact is that we have no rights; we are completely at the mercy of the Lord.

So by coming His Way of salvation, we also learn the Way to walk it out before our Lord.

When the disciples heard this, they were greatly astonished and asked, “Who can be saved?”  Jesus looked at them and said, “With man this is impossible, but with God all things are possible.”
Matthew 19:25-26

Oh I have never heard the “salvation story” so real. Your BOOK, “SOVEREIGNTY TOUCH” would help us truly see this truth you have expounded today. Thank you Lord and thank you John for hearing HIM so profoundly!!!!

Dear John, As I read this post, I was convicted of the sin of judging and convicting others. After reflecting upon your post, I read John 3, where Nicodemus asks the Lord about re-birth, and Jesus explaining that it is a work of the Spirit. I was surprised to find the matter of judging and condemning later in verse 17; “God did not send the Son into the world in order to judge the world…” I always suspected I needed deliverance from this sin, but was helpless to do anything about it myself. I spoke to Him about it often,… Read more »

Thank you John! Wholeheartedly agree with all said here. This sums it up very well ” Salvation is up to Him. He owes us nothing, but He wants to show us mercy”.

You have a strong point there…. Remember the little song, ‘I have decided to follow Jesus?’ I once heard someone teach that we shouldn’t call ourselves Christians; rather, we should say, ‘I am a follower of Jesus Christ.’ If He makes us a Christian, then so be it. Very much like what Brother Lawrence was quoted as teaching.

My Brother John, what you have seen/understood and explained here is no simple thing… I had never heard salvation explained this way, and I’m listening because what I see here is your level of SURRENDER…

Much to consider in this post. Could you elaborate on this statement: “The Lord demonstrates to us what it is to be saved.”? Are you speaking of Jesus’ total dependence on The Father?