I write this with NO expectation for or judgment of any of the persons involved. I have no understanding of the torment or trauma the victims of the Las Vegas massacre are now or will experience. Their road to healing will be long, whether they were present at the shooting or are a family member or friend of those who were. This tragedy is horrific and scarring to the souls and spirits of everyone.

The Long Term Damage of the Las Vegas Massacre 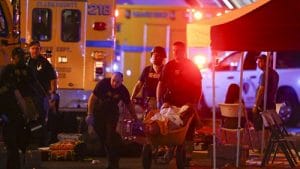 Over the last few days I have been doing a final proofing of the book Altogether Forgiven. When this blog posts, we will have already sent it to the printers. It appears that it will be available in November and I am ecstatic. But while I was combing through the pages, I saw through tears, something deep about this and every massacre. The greatest potential damage of a Las Vegas massacre is not done by the bullets that fly through the air but in the potential of residual bitterness towards these monstrous deeds. Unforgiveness can destroy many more lives than are lost on a day of terror. With this in mind, I must pray that those victims, direct or indirect, will eventually have the grace to forgive for their own soul’s sake.

The dictionary defines forgiveness as releasing the person who hurt you. And the levels of pain that were sown on October 1 were huge! People lost their lives and loved ones, others were maimed, and still others will bear the scars on their bodies and hearts for the remainder of their lives. This is a huge forgiveness, and one that God Himself will have to instill.

Victims of the Las Vegas Massacre 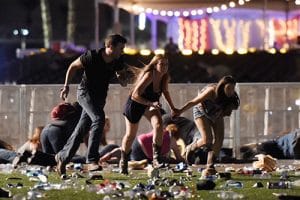 As I have read through the pages of Martha’s book, I have realized that Satan loves to lay bombs whose shockwaves are far-reaching. The ripple effect of the Las Vegas massacre has the potential to wound far beyond the scope of a madman’s gun. If, as Martha says, our lives and destiny pivots on our forgiveness, then I am going to pray fervently for everyone involved or affected on that day to receive His grace to forgive.

Satan knew his destruction could extend beyond the bullets’ reach. He knew that he could potentially drive a wedge deep into the hearts of many. Where a madman’s bullets might hit a target at 1500 feet, the aftershock can reach for generations. I never think about the extents to which terror reaches. I think about the day, the rescue, the following days in the hospitals, but what about the effects on the lives for the years to follow? What about after the dust settles? This is what I am on today. The grand reach on the deep inner hearts and lives of those affected.  The affect on these souls as they live out the rest of their lives. 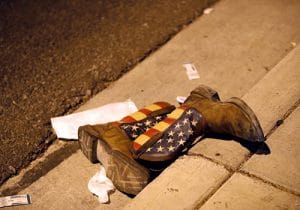 Bitterness and unforgiveness is a poison that kills slowly, completely and in a multiplicative fashion. It affects us personally but also reaches those in our lives. One drop of terror ripples on and on until it is dealt with. It must be faced with God and through forgiveness. Not like, “I forgive this man, may he not bear the penalty of his grotesque acts.” This train has already left the station—he is in hell. No, I am talking about not letting his destruction continue to destroy.  Where these people had no power to avoid his bullets, they do have the power to stop its further penetration. I have the power to choose to not let his evil make me bitter.

I don’t want this madman’s actions to continue to destroy beyond this day. The reality of his destruction is still being discovered. And after all the debates and the dust has settled, men and women are still going to have to live with what happened. They are going to have to still continue doing the work of healing, rehabilitating, and coping. I don’t underestimate the process of moving into the grace needed to forgive. But where I might have prayed for healing alone, as I did with Congressman Scalise, my prayer today goes beyond that. The Lord is giving me a longer view than I normally have. I am praying for the grace to end the terror. May the terror of this gruesome act be halted through God’s gift of forgiveness. 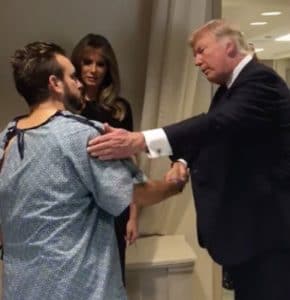 This post is absolutely correct. After an unimaginable event in my family – the ONLY freedom for the heart and life is forgiveness. And now, almost 8 years later, I have seen, through much of the teachings I receive from Shulamite, not forgiving is shaking my fist at God, the one who loves my stepdaughter and is sovereign and GOOD. Do I know His purposes in this? No. But I do believe that that day did not escape Him. Thank you for posting His truth. Many will revolt at this post because we cannot comprehend that the image we have… Read more »

Thank you for your encouragement. As one who has experienced this firsthand, your opinion and insights have greater weight. After writing it I thought about you, I am so grateful you commented. Bless you CP!

We never know the far reaching effects of what we do today, good or bad, unto the third or fourth generation. Excellent post, John. God bless you

That is absolutely right! I have never considered tragedy in this light before. That the longstanding repercussions are huge. It is easy to get caught up in the moment and then let it slip away into the next big thing. I am glad to be given a grander view. Bless you and love you Wanda!

i thank God for that insight. Pray for the grace to stop further terror in the States and the world.

For sure, Polly! Bless you!