I’ve heard things about the heart attitude of Mother Teresa of Calcutta which makes me so appreciate her. Sure, no one knows the heart of a man but God. Yet I still want to glean from the attitudes that I’ve heard about and apply them as I live in my world. I’m not catholic, but Mother Teresa had inspiring attributes beyond just her willingness to thanklessly serve the poor and downtrodden of Calcutta.

Mother Teresa was a tremendous humanitarian and her works of charity mercifully touched thousands and thousands in India. She worked in Calcutta, where the people’s religion is less than 1% Christian and almost 77% Hindu. Clearly she was outnumbered. So did Mother Teresa go to India to convert the population of over 14 million Hindis in Calcutta? Is that her legacy? No! She went to India to love God.

Mother Teresa More than a Humanitarian 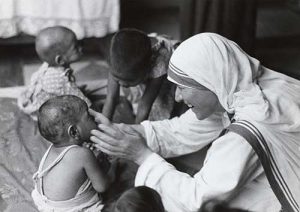 Mother Teresa served God in a Christ-less world by loving Him through her service. From all accounts she purposed to let Him deal with the hearts of the people around her. She was a rainbow in the clouds and if He wanted to reveal Himself through her service, then she praised Him. And even if He was not noticed, she still followed her course, which was to express her love for God. Her highest goals were to love Him and love a world that didn’t know Him. She didn’t take on the false responsibility of having to make people see Him. She let Him be God in the lives of the people around her while she continued to love Him with her service.

Mother Teresa said, “By blood, I am Albanian. By citizenship, an Indian. By faith, I am a Catholic nun. As to my calling, I belong to the world. As to my heart, I belong entirely to the Heart of Jesus.” By all accounts she was very clear in her walk. She did it all for the love of God, very much like Brother Lawrence. Additionally, she surrendered to God’s sovereign hand in her life and in the lives of those she encountered. Imagine being that free and that focused! 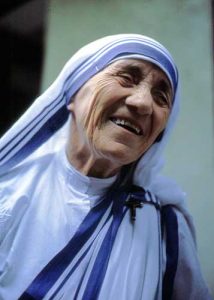 I know I have suffered from false responsibilities. I’ve wrestled to make people see, which is not my job. I have struggled to be understood in the face of misunderstanding. This, too, isn’t my responsibility. In serving God, I only have to present my body and surrender to the Spirit. This is my responsibility. Beyond this I am called to love and worship Jesus with all my heart, by being entirely His – like Mother Teresa.

Imagine the freedom we could live in if we never took on false responsibilities. If we let God be God in the lives of those we live with and encounter. Hey, how about letting Him be God in my life, where it concerns me and my life, too?! Oh, what a heavy burden it is to attempt to be God. All the while God says, “Love Me, I’ll take care of the rest!”

It’s like Father Cavanaugh said in the movie Rudy: “Son, in thirty-five years of religious study, I’ve come up with only two hard, incontrovertible facts: there is a God, and I’m not Him.”

Mother Teresa, for all intents and purposes, lived highly focused and honed. With the millions of extremely needy Indians, taking on the false responsibility of being God would’ve annihilated her. It reminds me of Christ, whose allegiance was to the Father, and not to the needs of the needy. Christ could praise the Father that He hid it from the wise and learned and revealed it to babes (Matthew 11:25). He didn’t struggle with the will of man or against the sovereign hand of the Father. This is such liberty! God is God so I don’t have to be.

“All the while God says, ‘Love Me, I’ll take care of the rest!'” Can’t be reminded of this often enough.
Thank you, John.
Love

The essence of Jesus have permeated all the posts lately.

Just what I needed to hear TODAY regarding responsibility, John. Thank you

John, your post has drawn my life back onto the One track and let me off the treadmill of ‘false responsibility.’
The first commandment, just Love God. Bless you!