I want to continue writing about John the Baptist and his confinements. In my last post, I discussed that a man can only receive what is given him from heaven. And that the only way we can receive from heaven is through weakness and dependence. Today I want to reveal how this sets us up to live in living symphony.

So John was willing to be confined in earthly limitations but given unlimited access to the realms of heaven.  Wow, what a trade up, but one that few embrace. Why? What was the Baptist’s secret? 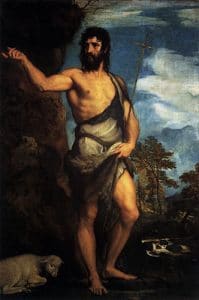 John lived his life on this earth in another kingdom. His acceptance of his limitations only pushed him into that kingdom. John allowed his God to be God. Because he was willing to be contained in God’s choice of borders, there were no limitations on him in heaven. Jesus said, “I tell you the truth, of all who have ever lived, none is greater than John the Baptist. Yet even the least person in the Kingdom of Heaven is greater than he is!”  Matthew 11:11

He didn’t have lands or houses, wife or heirs, fancy clothing, tasty delicacies, high earthly position – nothing the world values. He didn’t try to be anything other than what God had assigned to him. He was willing to be satisfied in his restrictions. And because he was willing, he was content.

He brought heaven to earth because he lived in heaven. The only way he could live in heaven was to be satisfied with what he had on earth. Nobody who has their eye set on gain from this world will be content with God.

Because John didn’t box in God but instead was himself boxed in, his reality superseded that box. The Pharisees boxed in God, and were therefore trapped by their confinement of Him. 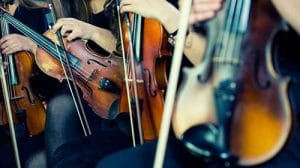 John allowed God to be God, hence he was unlimited. He was like refined oil, reduced to the essence, bringing a life-giving fragrance for heaven.

It’s an irony. When you limit the Creator, you as the creation are limited. When you restrict God, you will BE restricted. We want to receive the expansion without the cost of the limitation.

If you looked humanly at John, he had nothing. He was never to have children, never to have a heritage. He had no vocation as priest like his father. He was a wild man out in the desert, considered a lunatic by the religious of the day.

God assigned to him a handicap. A limitation. God imprisoned John to Himself. But John was willing to be imprisoned, so he had all of God.

That’s what I see about John; he was willing to be contained. Minimized. Restricted. Bound. Therefore he was not.

Because John was reduced, he soared. His life was made an amazing symphony orchestrated by His magnificent God.

There is a cost to grace, one not spoken by a health and prosperity crowd which expects to have their cake and eat it too. Although grace is freely given, you can’t receive it until you are willing to let go of what you have. What you have in your hand is costly in the long term; what He offers is only costly in the short term. The question for each is which cost do you want to pay?

John “didn’t try to be anything other than what God assigned him.” Blaze that into me Lord! John wasn’t ‘balancing’ among people, who he was, what he said & did. That willing dependence condensed him, to God…contained to Contain. I’ve been in a room where there was ‘a strain’, each one looking around at faces & places, to decide how to ‘be, there’. The undercurrent of strain is desire for gain, even for what might be considered ‘common expectation’. The shocking way to put it could be, ‘is that asking too much?!’ ‘everyone else has…’ So much for ANY comparison!… Read more »

Thank you John (both John’s ) may we gladly accept our limations that decrease us so that HIS life in us is increased. John was well aware that he MUST DECREASE . May it be so unto us your servants as you see fit. Amen

Jesus limited Himself to only what He saw and heard His Father say and do. Christ in us as us wants us to live the same way.

I love the scenes you have painted for me: contentment, fulfilling HIS plan for the complete purpose of my life, embracing the limitations of life as it is right now, as well as seeking which instrument I am in the symphony. Desire to embrace the lowest place, I might as well, that is what He has chosen, the least is a blessed place to be. Thank you, bless you!!!!

0
Reply
Three Months | Get Along With God

“When the wind is contained in the flute, it can bring forth music…If a person will be contained within the mind of his Creator, their life can bring forth a symphony.” What a poetic, simple – yet profound illustration the Holy Spirit gave you, John. Thank you for receiving it and giving it away!

It is all about a choice to let God be God in the moments of my day and life and to stay at peace in the circumstances of the moment. Once I found His peace I am learning to walk only in it. When I get out of it I enter into a world which I had once tried to manage, figure out and control, the result is instance confusion and chaos. I quickly run back to His safety and peace and set my eyes on Him. He in His mercy brought me through enough hell that I cannot live… Read more »

“He was willing to be satisfied in his restrictions. And because he was willing, he was content.”…”He was a wild man out in the desert, considered a lunatic by the religious of the day.

God assigned to him a handicap. A limitation. God imprisoned John to Himself. But John was willing to be imprisoned, so he had all of God.”… I needed this one today….how easily we limit God in the very circumstances He assigns us to.

Losing my life…to gain it, dying to live!
I still fight against this confinement…so it seems, but in that confinement is
the true freedom. What a paradox, we become what we really are in His
confinement! For example, a pearl in nature is “boxed” in and in that sense “becoming” or being made into what she truly is! It’s the opposite of
the worlds views on success! Thank you for these insights,so much to ponder and apply! Lord help me “stay” put in your box you’ve placed me, for it is there I will become all you desire!