Paul said it was by grace alone that God chose to reveal His Son in him. By grace! His revealing is not from our desire, as earnest as it may be, nor through our efforts to have it be so. It is simply God’s grace—His unmerited favor. It’s His choice to choose and His desire to reveal Christ in me. Though we can ask for it, His Life is still only expressed by His grace and choosing.

But even before I was born, God chose me and called me by His marvelous grace. Then it pleased Him to reveal His Son to me so that I would proclaim the Good News about Jesus to the Gentiles. When this happened, I did not rush out to consult with any human being.  Galatians 1:15-16 NLT

Christ in Me is by Grace Alone 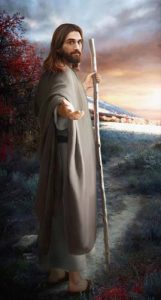 Here is another kicker I’ve gleaned from this scripture. Christ’s revealing of His Life in me is for His pleasure and purpose, not mine. Living in a world infused with self-focus and self-fulfillment, this seems almost profane. “Not about ME?! Who knew!” Nope. I’m benefited, I am blessed, I am satisfied but the focus is not for me, it’s for Him.

Look at the scripture again. Paul received the exchanged life “so that” God could proclaim the Gospel to the Gentiles. It wasn’t to fulfill Paul’s deep heart for fellowship and union with God. It wasn’t to satisfy Paul’s need for a purpose-driven life. And it wasn’t even for the people to whom Paul was called. It was for God’s satisfaction, for His pleasure and in His plan. Imagine, His world is for Him, not me!

So, does this mean that Paul wasn’t given deep fellowship and union with God, a purpose for his life, or a service to the people of his calling? Certainly not. The reality though is that it just wasn’t sourced in Paul’s life or under Paul’s direction. Paul’s fulfillment came from Christ’s own satisfaction. It was the grace of God to reveal His Son’s Life in Paul and in that grace was Paul’s pleasure.

Amen, John! The fact that our eyes have been opened, it’s only by a divine act, nothing we could do about it. When Peter said “Thou art The Christ, The Son of the living God” Peter was as astonished as the rest of them… ” flesh and blood did not reveal that to you, Peter”
” I chose you, you didn’t choose Me”
” And I chose you to bear much fruit” all for the Vinedresser’s satisfaction and glory!
Our satisfaction is nothing other than, the glowing of His heart reflecting into ours.

Yes! By His grace and for His pleasure , not mine! Love this John, and as God would have it Martha Wilson is teaching on Grace at Touching Hearts tomorrow! I needed this reminder too.

Thank you Penny! So pleased this ministered to you. Please tell Martha I send my love. Bless you!

Amen Brother,
“Not my will but your will…” “Let this mind be in you…” We all need our minds adjusted. Every Godly exhortation says; take your eyes off of yourself and look at Jesus.
“…All things were created through Him and for Him.”
“…For Yours is the kingdom and the power and the glory forever.” Amen.

Thank you Bruce, all amazing scriptures that sink this message home. Bless you for sharing them.

ALL is
For Him
By Him
Through Him…
He is Sovereign.
It all may seem chaotic and order-less yet He IS Sovereign.
“His world is for Him, not me!”
We are “benefited,…blessed,…satisfied…” when we choose to not “kick against the goads.”
Thank you John for always taking me deeper (usually fathoms ?) in my thoughts and understanding.
Love!

You are a gem! Thank you Tammy. That is a good distinction, “no goad kicking” ?Love you!