Every generation witnesses some degree of civil unrest. It seems to be the ebb and flow of humanity. And earthly authority can be a huge finger poke from God’s sovereign reign. But in light of the uprisings I’ve witnessed, I would like to share with you how I personally sought the Lord for answers.

My heart was heavy and saddened by the riots and corruption in our land. Lawlessness is rampant from the top down. Quite frankly, we have become a nation filled with lawless ones. One Nation under Lawlessness!

One of the nights when there was an uprising, I had a disturbing dream. The dream was about aggressive, intimidating men, filled with strife and violence. I know it stemmed from watching news clips before going to bed, but I just couldn’t shake it. At one point during my dream, I walked into a room packed with men – actually, they were thugs who were ready to erupt. The clothes they wore were for urban warfare and they were seething for a fight.

The next morning, I turned to God to still my heart and settle my fears. He led me to Romans 13, which speaks of respecting authority because all authority comes from God.

Casting off the Restraints of Authority 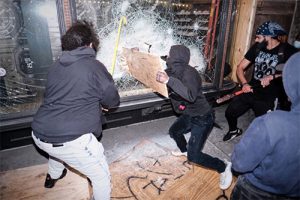 The truth behind the anarchy of the world:  In our hearts we have cast off the restraints of God, so now we are unable to submit to the human authorities He places over us.  Lawlessness runs rampant because in the secret of each of our hearts, we resist God.  These flash bombs, looting, broken windows, spray painting, and burning towns are not from resistance to man; they are from resistance to God.

I am talking about lawlessness as a whole, here, not as a single event or even one particular country.  This is not about one person or even multiple people being abused by authority.  I am speaking of the primal rebellion that set this scenario of human rebellion up in the first place.

Consequences result when we cast off the restraints of our God, rejecting His rule over us.  And so I ask, just whose authority are we trying to shake off in our resistance?

But some of His people hated Him and sent Him their declaration of independence, stating that they had rebelled and would not acknowledge Him as their King.
Luke 19:14 TLB 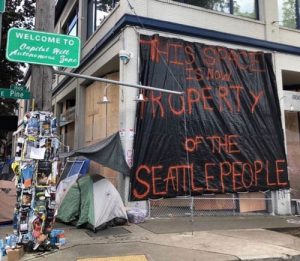 I will have no ability to submit to God-given authority when I resent and resist God’s actual authority in my life.  In this heart condition, rebellion, godlessness, anarchy, and unrest thrive.  We are witnessing neither bad cops gone rogue nor rebellious youth in an uprising.  We are seeing the result of man casting off his restraints.  This is what it looks like when we are working to be free from God’s rule.  This is the direct result of telling God to shut up.

We are watching rocks thrown at God, cars and buildings set on fire to spite God, and the murderous abuse of God-given power on the part of human authorities.  If there is no authority that is in place but by God’s own direction, then God is to blame.  Our fight is with God!

Authority is About Man not GOD? 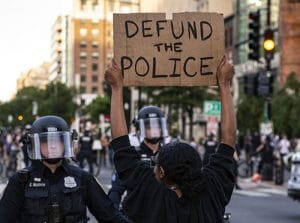 We want authority and sovereignty to be about man, not God.  I can fight, spit at, and revile a man, but God?  My rocks cannot reach Him.  The reality is that our world is burning from our resistance to God as God.  We have clothed ourselves in the garb of war against God.  It is His rule we are fighting against in our hearts.

The entire climate of our world is the result of man being mad as hell that God is actually God.  We are infuriated that He has the audacity to reign in our lives.  We are witnessing daily the fruit of a culture that has been so blessed by God that now we feel we do not need Him, nor do we want His meddling influence in our lives and choices.

Instead, clothe yourself with the presence of the Lord Jesus Christ. And don’t let yourself think about ways to indulge your evil desires.
Romans 13:14 NLT

Authority is a vital subject we each must face with honest and clarity.

Bro…spot on!!!! Keep bringing the nuggets of Truth ♥️

You took it to the issue John, God AS God. “This is a war & whoever is not on my side is against me, & whoever does not gather the spoils with me will be forever scattered.” Lk.11:23 The flashing Kingdom sword is evident. The rampage isn’t only the mob in the streets; seething hearts are taking terrible rights to themselves in a face off with God. Men want God to stick to their relegated idea of Him. God AS God…only HE is Enough…in this…in us. The world system thrust is to make God obsolete. At the bottom of every… Read more »

This, “ We are witnessing daily the fruit of a culture that has been so blessed by God that now we feel we do not need Him, nor do we want His meddling influence in our lives and choices.“ Many feel that the only way to correct injustice is to rebel. Martin L King called for non-violent protest. Those who know Kingdom authority and walk in it as Jesus did have nothing to fear. We overcome our enemies with love. With Kingdom authority. This is what many do not yet understand. We may need the fire to reveal our need… Read more »

John ,
Holy Spirit revelation to your Dream is so revealing of the root to which the lord is laying the axe our “wrestle” is not with man but with God’s rightful authority over us.
Psalms 2 is a clear confirmation of His answer to your prayer.

He is laying the axe to the “ROOT.” of our
“Fierce Independence “ of throwing off His
Restraint.