I spoke to a lovely woman named Norma yesterday, and she talked to me about faith. Norma is a kindred spirit in the best sense of the term. We’ve never met in person, but as with so many people I’ve met over the phone, it is effortless to love her. She shared a revelation with me that went straight into my heart and ignited such a hope and confidence that I knew I had to pass it on. She said: In the Word of Jesus is His faith. So to speak His Word is to speak His faith into that person or situation.

So then faith comes by hearing, and hearing by the word of God.
Romans 10:17 NKJV

I don’t have words for the Life that was breathed into me when Norma said this. I’ve received this Truth before, but it really clicked in this time. And that perfectly illustrates the revelation itself. In reading the Bible and books and booklets and articles and devotions and emails and letters, I take in quite a bit of knowledge and truth on a daily basis. I think that most of us do. But reading something isn’t the same thing as taking it in, imbibing the Word as a plant’s roots take in sustenance. Only the Holy Spirit enables impartation of the Word as LIFE.

What if the Bible is true? 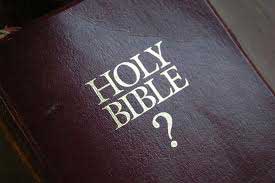 I told Carole what Norma said, and she lit up, too. It reminded her of something that Martha said: “What if we pretended that the Bible was true? What might happen?” Ha! That’s it exactly. That’s the faith of Jesus!

It’s an old plotline of movies and books for the protagonist to make the radical decision to live their life as if they only had a week (day, month, year, etc.) to live. What usually follows is some variation on the outlandish behavior that accompanies having priorities that are at odds with the rest of the world. Isn’t that supposed to be the normal Christian life? Wouldn’t my life look outlandish to the world if I lived believing that the Bible is absolutely true? That the Word carried the faith of Jesus Himself to accomplish what it purports to do?

What if the Bible is true and I believe it?

How much easier would it be to love as Christ loves when I believe that speaking the Word He’s given me to speak is all I have to do? There’s no temptation to argue and wrestle and contend with someone else’s will when I BELIEVE that the faith of Jesus Christ, Son of God and King of Kings, is carried within the very sounds and syllables He asks me to utter. I would speak and LET it be! I would rejoice in anticipation of what was coming, because God made a serious promise concerning His Word, and it’s all true. “So will My word be which goes forth from My mouth; it will not return to Me empty, without accomplishing what I desire, and without succeeding in the matter for which I sent it” (Is. 55:11).

The Holy Spirit knew my need though I did not. He sent a Word through Norma that exploded into Life, annihilating creeping doubts and discouragement before they even made themselves known. I am to be intrepid – “characterized by resolute fearlessness, fortitude and endurance” – with the Word that God gives me, because it carries the faith of Jesus, the power to accomplish what God intends it to do. What a magnificent Father we have, and what a tremendous adventure of a life He’s give to each of us!

Matthew 21:22 AMP
And whatever you ask for in prayer, having faith and [really] believing, you will receive.

As a teenager I chose to believe all but one book of the Bible. I did not believe the book of Jonah. One day a fellow student challenged me. He said “Why believe any of it, if you don’t believe all of it”? Aghast at what my fellow Believer had said I asked him, “what did you just say to me”He curtly repeated his statement. I pondered that for a while, and saw where I had been foolish trying to be “intellectual”. Trying to say I had one on God that just didn’t ring true. After a few days, I… Read more »

Jesus answered by quoting Deuteronomy: “It takes more than bread to stay alive. It takes a steady stream of words from God’s mouth.” (‭Matthew‬ ‭4‬:‭4‬ MSG)

YES, I’M WITH TAMMY, THANK YOU LORD FOR NORMA, AND JENNIFER. WHAT IF………Oh LORD let us take this in and come “get along with GOD” and be filled with your word and powerful resurrection power to live it.

Believing that the Bible is His Word is not something I’ve ever (since becoming His) struggled with. I’ve witnessed the power of it in my life and in the lives of others – Yet! He continues to make all things new!

“Then He who sat on the throne said, ‘Behold, I make all things new.’ And He said to me, ‘Write, for these words are true and faithful.’ Revelation 21:5

Plainly amazing. Thank you for sharing.