Who gets the gift of suffering? 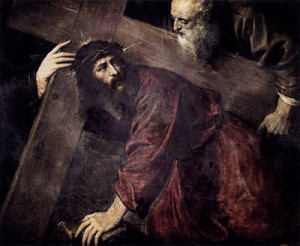 Well, we’re in luck. God doesn’t share His suffering with just anyone. Though every believer is called to lose their life and join Him in the forming of His life in others, not everyone answers the call. You must choose to receive this gift. His gift of suffering is to fellowship with Him in His sufferings. He invites many, but it’s only those who embrace their personal crosses who receive the privilege of partaking in His suffering. It’s just not for the casual Christian.

It’s a trust to be endowed with sharing in Christ’s own suffering. This is a divine mystery of union and fellowship with Him. And there’s a special intimacy offered to the one who willingly receives a place to carry Christ’s burdens with Him. It’s a place that few covet and even fewer will receive. It’s a deep burden but the Reward is so sweet.

As I reflected on how to visually represent the fellowship of Christ’s suffering, I first thought about the cross. We have many pictures of Christ’s agony on the cross. But this is not where the Spirit led me. The cross was Christ’s alone to bear. Even the Father turned His back on Him as He bore it. “My God, my God, why have You abandoned Me?” But the place that does reflect the fellowship of His suffering is in Gethsemane. It was there that Jesus asked His inner circle of trusted friends to join Him, to bear with Him in His suffering. This is why I chose pictures of Christ’s Gethsemane. 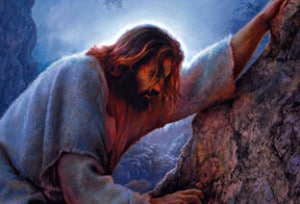 When Christ went to Gethsemane, He didn’t take the masses, nor those following Him, not even all His disciples. No, Christ took only three to join Him, to fellowship with Him in His suffering. These three were given the gift of suffering. Today too there are many followers and believers, a few disciples and even fewer trusted friends of the Bridegroom who will join Him in His pain.

I believe it’s virtually impossible to partake of Christ’s sufferings while being absorbed with my own. The one given the gift of suffering is the one who no longer is. “It is no longer I who live, but Christ lives in me” (Galatians 2:20). It’s the one who has lost his life and interests for the sake of his Beloved. With this one Jesus shares His gift of suffering.

Think about it – we share our persona with the world and our happiness with friends, but it is only those we trust most that we share the pain of our hearts. Out of desperation we may reveal our struggles, but to actually entrust another to come into our suffering, and more, to join us in our deepest hearts pain…this is only given to one we trust.

In like manner, Christ entrusts only a few with the gift of suffering. He lets a handful into the place of literal fellowship with His suffering. May I be counted as one with whom Christ feels at peace to share His heart and suffering.

Philippians 3:10 HCSB
My goal is to know Him and the power of His resurrection and the fellowship of His sufferings, being conformed to His death…

Romans 8:17 NIV
Now if we are children, then we are heirs—heirs of God and co-heirs with Christ, if indeed we share in His sufferings in order that we may also share in His glory.

John, this is so much the Spirit writing this–how on earth could you write this without weeping?! Definitely a keeper to ponder with His humility and thanksgiving.
Love.

God blesses you. Beloved brethern, because of my walk with the Lord of all Glory I know it is He Who chooses us to “suffer” so that we may get lost in Jesus; “no longer me, but Jesus”, and He sustains us at all times for the sake of the Resurrection Life. We just have to say “yes, yes, yes” to everything He ordains. That’s why all Glory belongs to God. Thank you to Shulamite from Pto. Vallarta, Mexico.

John, all of your posts on pain and suffering have gone deep. This morning I was so pierced by the Spirit through your post in repentance over my selfish, self centered suffering. The fellowship of His suffering that you spoke of, to receive and enter that, is so completely opposite. He caused me to somehow see and feel the stark difference through your writing and it is piercing. It puts Him and His purpose and heart and will as the focus, the whole meaning. Thank you, John, and bless you.

I have no words…

I am praising the Father for those He has chosen to put along my path. Those who bless with words, giving utterance to the things of my heart, when I have had no words to describe.

Jeremiah 23:3-4
“But I will gather the remnent of My flock out of all the countries where I have driven them and bring them back to their folds; and they shall be fruitful and increase.
I will set up shepherds over them who will feed them; and they shall fear no more, nor be dismayed, nor shall they be lacking, says the Lord.”

Many want His glory, few want His tears.

This went deep. Thank you.

John, such powerful words of challenge to me. Bless you for this confronting and compelling post.

When dying to ourselves, taking the will of the Spirit upon us, we share His burden and we ache with His pain. The crimson blanket (mantle) of the Spirit (of the Lamb) is at the same time a light burden and an agonizing sharing of His sufferings, the suffering of bowing the will.

I rejoice that He knew at Gethsemane the cost of following the Spirit. He showed me that the way of surrender was not easy (even for the Son, the very Owner of the Vineyard) for Him, the One Who chose to be a grape crushed.

Yes, the suffering of bowing the will – but isn’t it sharing His present suffering also: Recently i heard a preacher say that Christ, resurrected and at the right Hand of His Father in the heavens, is a “happy” and triumphant ruler. This is a big misunderstanding. He cares and He loves. One Who loves is vulnerable, can be hurt. He is not indifferent about those of His Creation, choosing death. He suffers by the terrible things that would happen in His Name. He suffers by His Name and Person being mocked, misunderstood, veiled, hated, rejected, distorted… The more we… Read more »

Oh, yeah…. “a happy Christ”. See, I have not had many experiences or visions, but once I saw Him (the Christ). You cannot explain experiences of the Spirit with human words, you know. He was “behind” the Father, in a “reserved”, HIDDEN, VEILED, place. And He was there, I knew that, and I could NOT see Him, but in that place of “sonship” (I would not know how better say it), He was waiting FOR the Father to put everything UNDER His feet.

And no, He was not “happy”. He was just Christ, undisputed S-O-N… in a waiting, hidden Place.

Sorry for not answering you: Yes, it is a you say “He is not indifferent”, “He cares and loves so He gets hurt”. The ministry of sharing His pain I believe is a mark for those in love with Him. I believe you cannot escape from His pain if you love Him (which I believe John is conveying), because that pain is the result of a nearness to Him, Who really knows the crushing/brokenness. Marys in the Bible shared that His pain, just let’s remember the anointing of Mary of Bethany (John 12:3). She shared so much the deep anguish… Read more »

Gaby, you bless me with His words through you!

I believe it’s virtually impossible to partake of Christ’s sufferings while being absorbed with my own.