Where is He who has been born King of the Jews? For we saw His star in the east at its rising and have come to worship Him.
Matthew 2:2 AMP

The heavens announced the birth of The Light. With Light… 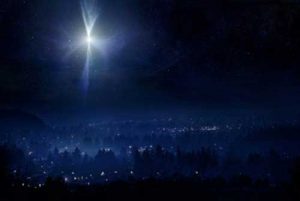 “His star” the wise men called it. Gentile rulers, willing to follow a heavenly sign at great cost and foolish risk. They followed the star for months.

Heaven led their journey – students and believers in Daniel’s God.

Seeds of promise left to heathens from Daniel’s vision of Heavenly Thrones, kept alive for 6 centuries, a hope passed down to generations as something so real, its certainty never waned. Foreign faith, amazingly sure of the Coming Messiah and the sign in the firmament of “His star.”

…and the star which had been seen in the east in its rising went before them until it came and stood over the place where the young Child was.
Matthew 2:9 AMP

Those who watch heaven’s light, and follow its direction, find the Christ…and worship.

When they saw the star, they were thrilled with ecstatic joy.
Matthew 2:10 AMP

The Holy Spirit records the exuberant thrill of three great and wealthy kings, who simply followed and humbly believed in a greater King: the highest. The long journey, the great exertion, the preposterous risk (following a star?), and now they had found Him, the One for whom they had waited more than 600 years! “King of the Jews” they called Him, recognizing, knowing, believing Him more deeply than His own people.

Not just prophet, not like human Daniel, but THE KING had come – at long last – and they beheld Him!

…and they fell down and worshiped Him. Then opening their treasure bags they presented to Him gifts…

Such ecstasy we can barely glimpse, we who know this as a play in school, a yearly story, the wonder of it lost in familiarity.

Moses saw “His star” coming. Clear and sure. Jesus said, “He wrote of Me.”

I see Him, but not now;
I behold Him, but not near;
A Star shall come out of Jacob;
A Scepter shall rise out of Israel…
Numbers 24:17 NKJV

Arise, Shine;
For your light has come!
And the glory of the Lord is risen upon you.
For behold, the darkness shall cover the earth,
And deep darkness the people;
But the Lord will arise over you,
And His glory will be seen upon you.
Isaiah 60:1-2 NKJV

750 years before the Star rested over Bethlehem, Isaiah seemed to see these wise kings; the promise of all future Gentile journeymen, traveling and following the star in their hearts, from earth’s most distant places until at last it rests on Jesus, the Christ.

The Gentiles shall come to your light,
And kings to the brightness of your rising.
Isaiah 60:3 NKJV 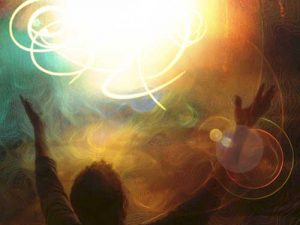 “His star” as heaven’s witness still shines on human hearts, a light within that Christ was born into night to overshine the darkness of a lost Eden.

And we have the prophetic word [made] firmer still. You will do well to pay close attention to it as to a lamp shining in a dismal (squalid and dark) place, until the day breaks through [the gloom] and the Morning Star rises (comes into being) in your hearts.
2 Peter 1:19 AMP

May we gaze at the stunning prophetic word, the many witnesses to the Light, and behold the wonder of God’s long-planned visitation: His Beloved “Sunrise from on High” (Luke 2:78 NASB). And may this Son of God and of Man, called “The Morning Star,” rise in our hearts and come into Being within, by piercing Light, trembling worship and…“ecstatic joy.”

I just realized this season that the star most people depict for Christmas has the Cross in the middle of it.

That is so cool! I had never thought about the connection between Daniel and the wise men. I love the way He hides His truth for the seekers of true Wisdom.

Thank you, Martha — may we never lose the wonder!
Love

Beautiful Martha. Blessings to the Shulamite family of God!