I am not one who thinks that every bump in the night is a demon, nor that every warm wave of emotion is necessarily God’s manifest presence, but I did experience something recently that I absolutely believe was the smile of God.

A Rainbow and The Smile of God 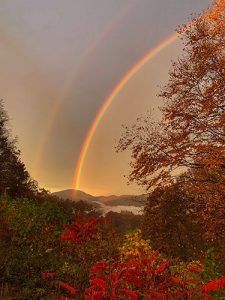 I was coming home after a long day spent traveling to Atlanta for an art class. As I was driving up the mountain, I passed an overlook and saw the most beautiful rainbow I have ever seen. Thankfully I was driving at a normal speed and was able to slam on my brakes, throw the car into reverse, and pull into a small car park. As I jumped out of the car to get some pictures, I noticed another gentleman was there looking at the rainbow as well. I looked over to greet him and he smiled at me with the most unusual smile. In fact, his smile was as radiant as the rainbow.

I moved around to take pictures at different angles, both panoramas as well as regular shots, because the entire scene was just so absolutely breathtaking. And as I photographed the rainbow, I commented to the man about how beautiful this all was and he agreed. And each time I looked over to make a comment, I saw his beautiful smiling face. He smiled with utter contentment, joy, and satisfaction. It was like he was standing in as presenter of this beautiful sight that I was shooting. Not as though he’d created it, but like he was a signpost saying, “Take a moment to smell the roses!” I wonder now if the man was an angel, because as I said, his smile was as radiant as the rainbow itself.

The Smile of God at the Lake 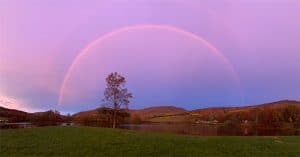 After a while I hopped back in my car and continued over the mountain. I got down to Woody Lake, a few miles away, and the rainbow was there as well but now it displayed itself over the lake. It was a full half circle double rainbow, utterly amazing. And not only was the rainbow outstanding but the entire chain of mountains had a strange, glorious glow, like nothing I’ve ever seen. 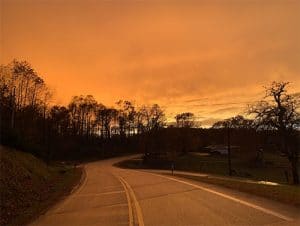 I’ve never witnessed a more beautiful sunset in our mountains. It was truly unique and captivating. At one point the sky cast an amber glow on everything but the glow seemed only to silhouette the landscape, trees, and road. It was like this light was an entity of its own, not illuminating but covering. Everything had a blanket of gold covering it. How is it possible to give everything a glowing silhouette yet not illuminate it? It was amazing and spectacular! 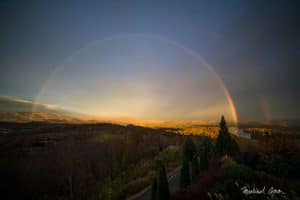 The next morning as I looked at my pictures, I remembered my dealing with Jesus the carpenter and playing catch with the Father. Let me remind you of my statement in those posts: Because I am in Christ, everything involving me – and all things about me – is included in Christ. Yes, not I but Christ isn’t isolated to Christ being simply in me, now He is everything concerning me. So maybe I witnessed Christ smiling through that man. I can’t describe how beautiful his smile was. The smile didn’t require anything of me nor did it have any judgment of me, it was just enjoyment of the moment with me. You know, I’m always looking for the smile of God, and this man displayed what I imagine that smile would look like.

Others Saw the Rainbow

Later that morning I went to the gym and asked the front desk attendant if he had seen the beautiful sunset the night before. He excitedly replied, “Oh my gosh, that double rainbow was incredible! Wow!” So the rainbow not only displayed itself in Suches, it also was horizon to horizon in Blairsville as well. It was like the whole mountain witnessed this incredible rainbow. 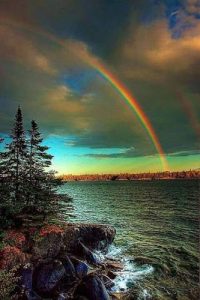 I have experienced the Lord’s presence in many ways, His overwhelming holiness as well as His deep pleasure. Gazing at and trying to capture this stunning blanket of color was another of those times. It was very much like when God’s presence rested upon a group of us as we ate dinner while visiting New York City. As we sat in a restaurant enjoying a meal His pleasure and smile just joined the table. I can’t describe it beyond a sense of complete wellness and warmth. It’s that place you don’t want to leave—ever. Like swimming in a warm pool on a cold winter’s day, you just want to bask in it.

When I drove through the mountains and saw the rainbow, I felt God’s joy. And when I saw that man’s beautiful smile, I knew God was present and smiling at me. I wish I had taken a picture of this man and his smile.

The Smile of God in a Rainbow All Around 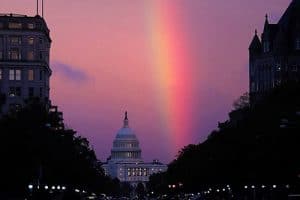 Later I discovered that this double rainbow phenomenon was experienced all up and down the eastern seaboard. The rainbow was seen in the Carolinas, Virginia, Pennsylvania, Michigan, and even over our Capital. But a rare and beautiful smile accompanied my rainbow view. Oh, I thank You Father for the smile of God!

May the Lord smile down on you and show you His kindness.
Numbers 6:25 ERV 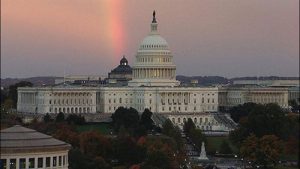 The Lord make His face shine upon you [with favor], And be gracious to you [surrounding you with lovingkindness].
Numbers 6:25 AMP

What lovely pictures and writing…..and when you get to heaven, this Angel/man can share what he saw of the heavenly man in you!!!!!
What an uplifting post for me!!!!!

Thank you Sue! I can only imagine! Love!

The Heavens declare the glory of God. Awesome!!!

Yes and Amen Wanda! Bless you and love you!

I had a similar experience once with a man that I believe was an angel. I always believed he was an angel, but now hearing you describe yours, I am even more convinced that he was. I felt God’s delight in your story. Thank you. May the Lord bless your day with peace joy hope and love today. In other words may He bless you with His overwhelming Presence. Jesus, we live to see You smile on us. Thank You for delighting in us and for showing us You love us and are with us and that we are always… Read more »

Thank you for sharing this Kimberly and thank you for your blessing and encouragement. I receive it and your prayer for me to encounter His overwhelming Presence. There is nothing like it! Bless you in return and may you experience that same Presence in your life.

“The LORD lift up His countenance
upon you,
And give you peace.”
Numbers 6:26 NKJV

To actually encounter that countenance lifted up, it makes the prayer that much more meaningful huh?!!! Love you Tammy and to you as well.

As Moses said, “I will turn aside to see this great sight…”. Thank you for having eyes to see and for sharing God’s smile with me today. Bless you my brother in Christ.

I truly did turn aside and saw! ? Love you Irene, so nice to hear from you.

John, this is beyond beautiful. Before you say hello, before there is an extended hand, there is a smile. This message is in His perfect timing. Thank you for being in His will in His place for you. It is a blessing to me and my children. Love!

That is perfect and so true. Love you big Alex, thanking God for you and your family! Haven’t forgotten about a visit, just kinda crazy with the book and all. ☺️