His eyes flashed like a flame of fire.
Revelation 1:14 AMPC

We have been writing about gazing at Christ – one from Gaby in Austria, another from Jennifer and then mine. We are referring to this passage that promises transformation, just by a focused gaze on Christ.

2 Corinthians 3:18 NASB
But we all, with unveiled face, beholding as in a mirror the glory of the Lord, are being transformed into the same image from glory to glory, just as from the Lord, the Spirit.

Eyes of the Spirit 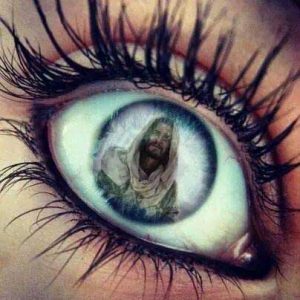 To ‘see’ the Lord with a focus of the heart and the eyes of the spirit—that is the hope of being changed and the way of radical connection to His very essence. I’ve written about this gaze in the Let Devotional Series on ReadMK. For many years I have prayed and longed for this scripture to be real in me.

But this matter of spiritual ‘sight’ has many aspects. It suddenly occurred to me that there is another gaze that I hadn’t considered nor ever written about! If Christ is indwelling your body, and if He possesses your heart and mind, then He uses your body for the manifestation of Himself. Right? So then He uses your eyes, He sees through your eyes, and you can see what He sees.

You see with His sight. As He casts His gaze on a focus of His heart, you see with Him as He sees. Too amazing? It should be normal Christianity. We are given to see into the heavens and into God’s face. The only work is to believe the possibility and ask for it. Really it is a calling. John vividly experienced the Lord’s view within his own eyes. He wrote a post about this amazing episode. It reveals Christ’s desire to give us His gaze. 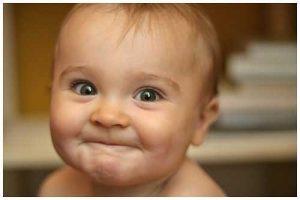 Scripture is full of the issue of seeing into the spiritual realm. You could write volumes about spiritual vision. Sometimes it’s an open vision where you actually see a scene. Other seeing is a picture in the mind. Often you get a vision from the revelation of the Spirit and you also ‘see’ certain Scriptures as if the verses were alive.

When we travel to Israel, John is ever watching for the one person among the Jews on whom he sees what he calls the ‘smile of God.’ Then John smiles because of His smile and God blesses the one on whom He has set His gaze. I will look and not see any such smile. It is John’s spiritual sight, not mine.

I once saw a vicious wolf inside a person near to us. I kept saying to John, “This is so bad, so awful.” He would reply, “I simply don’t see it.” I couldn’t prove it because I ‘saw’ it by my spirit, but it was as clear to me as if it were visible. In time, it became obvious to everyone else as well.

I went to a church service once and I saw, as if it were written on a banner, that the church was cursed. Death was on that church, and not because there was a wrong in the church, but because it was cursed by a bitter, irreconcilable person and those who were influenced by them. I saw it all clearly and shared with two who could understand and who trusted my seeing. So we prayed and believed in a certain victory. We prayed in this way: we blessed and forgave the enemies. Then we broke the curse by the power of the Cross, where Jesus bore all curses. Soon it was evident that things had changed.

How crucial it is to see with the inner eye of the spirit! It can be a life or death matter.

Join me tomorrow morning for more on spiritual sight and seeing through the eyes of Jesus.

Thank you, Martha, for this revelation! What an amazing truth, that we can see with His eyes. The life of living in the Spirit and by the Spirit is so rich and full, it makes one wonder, why we so readily default to being in the flesh? 🙁

OH Martha your new insight, “If Christ is indwelling my body, if He possesses my heart and mind, then HE uses my body for the manifestation of Himself So then…….WOW, HE uses my eyes, HE sees through them and I can see what
He sees.” Oh this is glorious and it is HIS TRUTH. I believe………can’t wait for tomorrow.

May He bless this telling of his revelation to our hearts and mind. COME LORD JESUS, COME

Thank you for this blazing prayer and call.