NOTE: I wrote this in 2000 and it appeared in Shulamite E-zine on Shulamite.com as an article. This is a precious story and a piercing revelation of the love of the Father and I pray it blesses all of you as much as it has blessed me!

The following story is more than it appears to be on the surface. Every experience is unless we refuse to be infused with the divine fullness within it, ever expanding and multiplying. Sadly, so many riches of life are lost by not listening to the Voice speaking of His Glory. My Father is speaking volumes to me through a very small newborn goat named Rudi.

Rudi is a living parable sent from the Father,  a lesson and a message in which  His heart was clearly visible and made known to me.

The Father’s Heart in His Shepherd 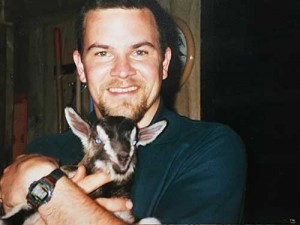 John lives next door. He’s a shepherd in addition to his many other responsibilities. He cares for an array of God’s creatures including goats, sheep, chickens, turkeys, dogs, and cats. He isn’t just a caretaker, he’s a true shepherd, and there is a big difference between the two.

Recently, Maggie, one of several expectant goat mamas, had triplets alone in her stall in the middle of the night. The smallest of Maggie’s kids, Rudi, stood out among them all. She was tiny and adorable, easily capturing our eyes and hearts. Her brother and sister were both much bigger and stronger. Rudi was the runt but she joined in and loved life right along with the rest in the barnyard nursery. We all thought she was the cutest and sweetest, but we didn’t know there was a crisis brewing. 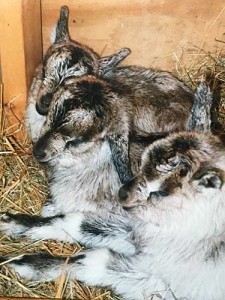 Just a few days passed and John called to say that Rudi was not doing well. That was a kind understatement cushioning me from what I finally beheld. When I looked at her lying there limply in his arms, I couldn’t believe what I saw. Her life was draining out of her bruised, battered and bleeding little body. As John recounted all the blood in the stall from where he rescued her, I listened, stunned. Her very own mother had rejected her! Apparently Maggie had tried to kill her by throwing her repeatedly against the walls. After all, she was the runt, the weakling, and only the strong are allowed to survive in nature. Though I desperately wanted to, how could I blame Maggie? It is Maggie’s animal nature to do what she did, to destroy the runt if she threatens the survival of the strong. That’s what animals do. It is their nature and we are all only as good as our own nature, right?

Rudi was in severe shock. She even appeared to be blind. Not only was she unable to stand, she couldn’t even hold her head up. Her eyes rolled back into her little head and she trembled in convulsions.

John rescued Rudi out of her own household, from her own family, where they were determined to kill her. He brought her into his own home, a place foreign to her but so much better than what she had known. He rescued her into the sanctuary of his own dwelling, where the nature of the One Who cares for him is ever present. John held her and loved her. He tended to Rudi’s hurt little body and breathed on her so closely that she could feel the warmth of his breath. He spoke quietly and reassuringly to her. While he worked during the day, she lay on a chair next to him wrapped in blankets. And hour by hour he laboriously fed her from a dropper with Maggie’s milk.

A Living Parable of the Father 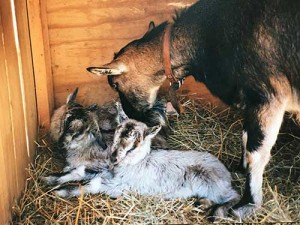 I sat alone before the Lord, crying out to Him for mercy for this little, helpless baby goat. As I struggled to listen and pray, He spoke softly and calmly to my anxious heart. The message of Rudi was a living parable that God wanted to plant as a seed into my heart. And I began to see, as if watching a movie, His living message unfold before my eyes.

Rudi is a picture of all of us, rejected, forsaken and abused by a fallen, sin-sick world. Our mothers, fathers, friends, teachers, or events themselves, have abused and bruised us. We were left to die without our destiny ever being realized or our purpose ever becoming known. But the Heavenly Shepherd comes and rescues us out of the cruelty of our base natures and places us in the Father’s arms. Yes, even into the heavenly places to nurse us back to real, true health in Him. He does it Himself.

As I began to see the parallel of Rudi with John and the Father’s saving love to us all, I found myself crying out, “Oh, Lord, Rudi can’t die! You can’t let her die, Father, because if You do, this parable just won’t be right.” Someone later reminded me how much He loves that kind of prayer. It was a spontaneous cry, a response and a reaction to the picture He was revealing to me. 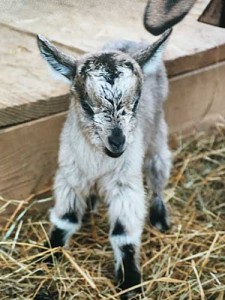 John ministered to this little goat while we all watched and cried out. The Lord gave us faith to believe for her life. John brought her into his home that first night to let her sleep in the bathroom but Rudi moaned. So he took the tiny goat into his bed. She slept cuddled against his body, moving only when he moved to stay close. He placed his hand on her body to calm her when she became anxious, until she rested again peacefully. At one point during the night, he turned over to see that she had miraculously risen to her feet and was standing on the bed just staring at him.   I told you, John is a shepherd, not just a caretaker. He is a shepherd by God’s calling. There is a big, big difference between one who attends and one who has a shepherd’s heart.

The very next day life came back into Rudi’s face and body. She was somehow new. And she had a new relationship with the shepherd, John. She followed him playfully, but closely, never letting him get very far in front of her. Here was the one who saved her, comforted her, fed her and just plain took care of her. She wasn’t about to let that one out of her sight because she knew she needed him to live. She knew the source of her sustenance, and she unapologetically and with abandon ran after him. She needed him desperately and even in her curious explorations, she stayed very close to him. What you need, you love, and God, through John, had proven His goodness and compassion for Rudi’s life. When John called her, she knew his voice and she ran to him.

A Revelation of Our Good Shepherd 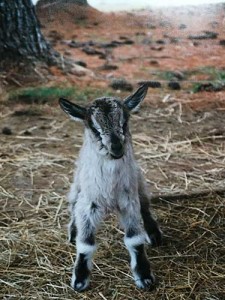 Just days before all this happened, Martha had a new revelation about knowing the Father and shared it with us. I knew that with Rudi and John, I was seeing the love of the Father and His intricate goodness and love for me. Unlike Maggie the goat, “God selected (deliberately chose) what in the world is foolish to put the wise to shame, and what the world calls weak to put the strong to shame, and God also selected (deliberately chose) what in the world is lowborn and insignificant and branded and treated with contempt, even the things that are nothing, that He might depose and bring to nothing the things that are, SO THAT no mortal man should have pretense for glorying and boast in the presence of God” (1 Corinthians 1:27-29 AMP).

The strong, the beautiful, and the wise don’t know and don’t believe that they have any need. God chooses the ones in the greatest need. He chooses the vulnerable, the helpless, the dying, and the sick. It’s a goat’s nature to kill the runt, the one least likely to survive. We pompously assume a nobler nature than the animals, but this is presumption. Fallen humanity hates, murders, steals, lies, and kills the unborn. We hide our utter weakness, pain, shame and destitution of spirit beneath the pretense of a strong and self-sufficient façade.

We’re ashamed of our weaknesses, our afflictions, and our battered lives. Yet Paul teaches us to boast in weakness, because where we are weak, God is strong. Our Father is moved by our desperate need and helplessness, just like Rudi’s need moved John. God loves to be our Father in every sense, because that is Who He is. I was watching my Lord’s compassion for me as I watched John with Rudi. That living picture grows inside me, like a planted seed. There’s much I see even now that I cannot yet put into words. One day it will bear much fruit because His word NEVER returns to Him void.

Thank you Carol. Amazing love of Our Shepherd!

You know, I’ve always had a great interest and passion in parenting. Since I was a young girl… And, I think it has everything to with the gut-wrenching and amazing parallel you shared here, Carole! The picture of Father’s love is just breathtaking… But the words that stood out to me were CARETAKER and SHEPHERD. It hit me very hard that, as a parent, more often than not, I have acted as a caretaker. I have functioned from my own understanding, turning moments and situations into a job. Life and love were not there for my children. They are the… Read more »

That “unapologetically” word runs deep (funny and poignant and powerful at the same time). The rest is hard to read with no tears. How great our need of the Shepherd.

Thank you for posting trhis! Yes, there are so many different revelations here. It reminds me of the Scripture the Lord gave me from Ezekiel 16:1-14, how he did this for me after the Enemy had ravaged me. He is a good, good Father, full of love (because that is His nature). I have a wall hanging on my twins’ wall that I had a friend paint with the Scripture out of Psalms that says He is FAITHFUL to all His promises and LOVING toward ALL He has made. Praise and glory be to Him always! He is AMAZING!!! PS… Read more »

thank you Carole, I could re-read this every year. Bless you LORD for giving Carole your word of how you have rescued us by the Heavenly Sheperd, and HE has sent this ministry to guide me into the healing of my lower nature, that had hate, murder in my heart to steal and lie. The beautiful picture of all of you crying out to save Rudi, again,
reveals my need to stay in utter weakness.
Bless you for crying out for all of our lives!!!!!