If you haven’t yet, you should pop over to Shulamite.com and read a new article by Martha called “Goodness Is So Bad.” It’s awesome and challenging and awesome again. I’m still moving through the waters of respect: what respect is and what respect isn’t. As I read Martha’s article, I realized that I have all too often equated respect with being nice. And that’s a dangerously wrong presumption. It’s a “good” presumption. Respecting someone has nothing to do with being nice to them.

But the Lord said to him, “Now you Pharisees clean the outside of the cup and of the platter; but inside of you, you are full of robbery and wickedness. You foolish ones, did not He who made the outside make the inside also?” 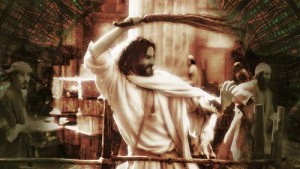 First, Jesus was very specific in His list of woes to the Pharisees and chastisements of their wickedness. He dealt with the Pharisees in front of Him. He saw them for exactly who they were! It may not have been pleasant to be seen so clearly, but it is a deep and unmistakable acknowledgement of their persons by Jesus. His warnings were delivered face-to-face and heart-to-heart. That’s respect.

Second, Jesus knew the path that the Pharisees were on ended in death and eternal damnation. It was the deepest kindness to alert these men to the truth of their predicament. It would be incredibly cruel to allow them to continue on their merrily wicked way without so much as a “Hey guys, the road you’re on goes through a minefield and then dead-ends in quicksand!” The Pharisees may have hated Jesus for what He said, and they may have refused the truth of what He said. But they could never claim that they weren’t warned. Jesus might not have been nice to the Pharisees (especially considering that He was guest at their luncheon), but He was indisputably kind.

In “Goodness Is So Bad,” Martha says:

“Jesus’ goodness was derived from God, who – He declares emphatically – is the only and the One Good. Have you heard someone described as good? “She is a good person.” “He has a good heart.” “That was a good thing.” Not so.”

Not so! I’ve let ‘goodness’ color so much in my life, and I don’t even like it! Yet I measure actions and character and people and situations by a standard of ‘goodness’ rather than God’s standard of holiness. And they aren’t the same at all! God is good, the ONLY good. May every day reveal the good will, the good ways, and the good thoughts of God to me—obliterating the death of ‘goodness’ in my life.

Amen, Jennifer. Although tired of it, I do this all the time… I measure people (especially) and situations by the goodness I find (or don’t) in them… I wonder WHY… Since good is only God, I can only assume I am trying to put people in a place that can only be His. What then would verses that talk about overcoming evil with good, to do good to those that hate you, and to do good to your enemies actually mean!!!???

Thank you Jen. As LA said, it is a thin line. However, if you are after Him, He will give and take what you need for every day. We talk and know much about the “giving” Lord, but we are absolutely blind about the “taker” Lord. He continually “takes away” many things that seem to be piety, but they are not. and likewise, He “gives away” things that seem “cruel” but are the most needed. That why He speaks of Himself as “thief. Look at this: Listen! I am coming like a thief! Happy is the one keeping watch and… Read more »

Good word Jennifer.
May we set our thoughts upon his judgments and not our own.

Interestingly, Paul warns the church not to keep company with someone named as a ‘brother’ who is in sin (specifics are listed) in I Corinthians 5:11-13
Very difficult to follow this instruction without being thought of as ‘mean-spirited’ or ‘judgemental’
Thank you for more on this topic, Jen

OH Jennifer, I join you in this payer, “May every day reveal the good will, the good ways, and the good thoughts of
God to me_____obliterating the death o ‘goodness’ in my life.