Are we willing for difficult times to come in order to see the next great outpouring of the Holy Spirit? Can we accept and embrace the trials and testing that will come after receiving the blessing of His glorious move? Many are praying for the next Great Awakening, but if we know anything about these moves of God, seriously troubling times come on the heels of each of these great moves of God. 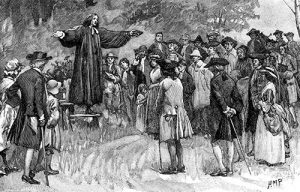 This happens every time our Heavenly Father moves greatly on the earth to make Himself known. Just look at American spiritual history. The first Great Awakening completely altered the religious climate in the American colonies. Ordinary people were encouraged to make a personal connection with God, instead of relying on a minister. God was drawing in the hearts of His people for a coming time of great difficulty.

Many historians claim that this Great Awakening influenced the Revolutionary War by encouraging the idea of nationalism and individual rights. Does this sound familiar? Many claim our revolution was proof that our country was founded through rebellion…my question is God’s part regardless of man’s involvement.

Historians believe ideas set forth during the second Great Awakening inspired abolitionists to rise up against slavery. This revival encouraged concepts which centered around the idea that all men are created equal in the eyes of God and this conviction would be defended with their very lives.

An Environment of Greatness 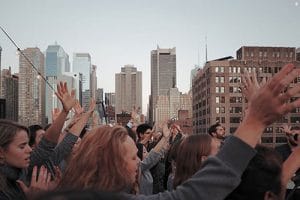 It is like God was laying up the environment for dynamic change and a need for Himself. I wonder if all difficulties arise for Christ to set the stage of our desperate need and hunger of Him. Could each troubling time be a set up to experience a mighty God and Deliverer?!

Additionally before the World Wars God sent an awakening. And similarly during the Vietnam era, the Jesus movement rose to prepare the hearts of God’s people. Essentially, God moves on His people to prepare them for the times that are to come. And the good news is, I believe He is doing the same thing in our crisis today.

History proves that war and testing follow each of God’s major move. The question is which comes first the proverbial chicken or the egg?! Did God sovereignly move His children in to place for the crisis to come, or did the crises erupt as a result of His sovereign move? I’ll let you be the judge, but I could recommend a book you can read if you would like to understand the nature of God’s Sovereign Touch.

God is a force & a draw..before we are even aware..as He dawns on us. I’ve experienced the gamut of His Jealous Love, from fierce pursuit to so tender it breaks your heart. There may be a different ‘volume’, as per heart & person & nation, but God is a Jealous Love in pursuit of His people & Kingdom. To visit places of battle, to hear stories first-hand of the sacrifice that had that element of love & liberty in it that gave no thought to “saving my life”…Oh, God.. He makes Himself known, first to the solotaire one, &… Read more »

In regards to your chicken or egg question, I always saw it from an earthly perspective. Like Israel, the people stray, causing all manner of problems and suffering. God, out of His love for the world, acts on its behalf, stirring the children of God. Yet, before they can carry out His missionary purposes, His children first need to rend their hearts and reset their own focus. When they do, an outpouring of the Spirit follows. Same vision; different perspective.

Your people will offer themselves willingly in the day of Your power, in the beauty of holiness and in holy array out of the womb of the morning; to You [will spring forth] Your young men, who are as the dew.