It is such utter pride to allow our common vessels to stand as authority over the God of the universe. How dare the creature – spit and dust – stand with any opinion. I am simple common earthly clay. God formed me and fashioned me from His own thoughts. My very breath and being are sustained by His notions of me. How dare I turn to Him in opposition to His truth with arrogant speaking, “But that’s not how I feel!”

Because of What God Says 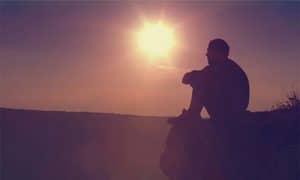 Scripture proclaims many fantastic descriptions to us all. They are all promises and current fulfillments. They are all given by God, and finished by Him. I must choose in my heart of hearts to come as a child and believe without suspicion, to surrender without the option of my own opinion.

A child believes the parent about a mythical Santa Claus. He will argue for his existence, defying the bullies of the neighborhood. On Christmas night he runs to bed without any questions, while all year he strained and struggled against bedtime. His heart pounds in his chest as he is falling asleep and his eyes spring open before the sun rises. All because a parent told him, “Tonight,Santa is coming.”

Why do we not just believe what He says? All of it.

He raised us up with Christ the exalted One, and we ascended with Him into the glorious perfection and authority of the heavenly realm, for we are NOW co-seated as one with Christ!
Ephesians 2:6,7 TPT

I believe that there comes a time when the Spirit imparts a revelation that the Word of God is true and you start to live by It. Such as Psalms 91 and you fight the fear of Covid with that truth. Because you are now living with the Kingdom perspective!

Great post Brother John. Your razor sharp insight hits right on the point. Thanks for sharing!

OH my good question for me, instead of a sheep going my own way, “WHY NOT JUST BELIEVE?” For sure HIS
kindness to me in Christ Jesus, because of HIM and HIS Blood, i have not received what I deserve but another
day to “BELIEVE AND TRUST AND OBEY’