It is easy to view the stories in the Bible two dimensionally. Mentally we can clean up the reality, give it a polishing so to speak—not as loud, not as dirty, not as human. This is a tremendous disservice to our relationship with God. It makes a number of us pew-itent rather than penitent. What is pew-itent? Fit for the pew!

Real life with Jesus is a little more base. Our desperation is loud, our need is dire, and our human condition is grimy. Thankfully our Savior is not afraid of the mess of it all.

In my last post, I spoke about our faith-filled insistence. I can assure you that my insistent prayer is not done with a high collar, perfect posture and British accent. My prayer life at some points is earthy and guttural, certainly not an inside voice. As I said in that post, this seems to be what God loves: insistent, faith-filled prayer.

I want to show you some of those in the New Testament who caught the attention of Jesus and were commended for their faith. They were Gentiles, unclean ones who didn’t fit in any pew. But here is Christ, commending them.

A Look at the Canaanite Woman 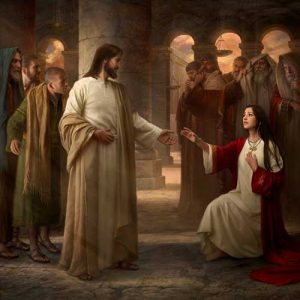 Let’s look first at the Canaanite woman. The Canaanites were a cursed people coming from the line of Ham (Noah’s son who exposed his nakedness). They were slaves and deeply troubled Israel in the Promised Land. The Canaanites included the Hittites, Jebusites, Amorites, Hivites…just a bunch of “ites.” They were never seated at any good Jew’s dinner table. And they were low born. Slaves are not refined.

Jesus’ response to this woman would have been expected. They were dogs in the eyes of the Jews, just common and trashy, a godless bunch of heathens. He ignored her while the disciples attempted to scuttle her away. But she would not have it. She was desperate to the point of shamelessness. Louder and louder and louder she got. The Holman Christian Standard Bible says, she came and KEPT crying out. Her situation was desperate; her daughter was severely oppressed and tormented by a demon. This woman didn’t care how humiliated she would be; she had to have His Answer. Jesus was a healer and delivered and He HAD to do so for her daughter. Jesus was even insulting to her, stating the Jewish view of the Canaanites, but she didn’t defend or become angry. He just HAD to have her daughter healed.

Insistent Prayer of the Canaanite Woman

Now don’t you know she had been to every Canaanite witch doctor and potion seller in the land? She had suffered sleepless nights and deep heartache. We don’t know how this demon manifested, but I assure you it wasn’t pew-perfect. This was an ignoble mess and this mother readily displayed her desperation with a less-than-inside voice.

Then Jesus replied to her, “Woman, your faith is great. Let it be done for you as you want.” And from that moment her daughter was cured.
Matthew 15:28 HCSB

Jesus commended her faith ­– not her prayer, not her will, not her volume, but her faith. She connected faith to her desperation and shameless persistence. And in response to her faith, Jesus answered.

“Pew-itent” people often lack the tools for loving their neighbor (Lk 7:47). Gotta get dirty before you can help someone else climb out of the pit.

God has me on a journey of faith for sure. He has shown me that I don’t have the faith to trust his answer. When I go to him in desperate prayer I realize I don’t trust him to not answer it or solve my problem the way I think it should be solved. The first step was being gut honest. The next step is trusting His good and perfect will. I am grateful for His love and patience.

You described a rinse and repeat part of my life. You would think, after going through this a few times, that I would have the kind of faith to move mountains, but that hasn’t been the experience. Maybe it’s just me, but I don’t think it works that way. If faith is climbing His mountain, then the difficulty level increases as my faith increases. Continually engaging with that first step is why you keep climbing higher!

I think recognizing that my prayers were for my will instead of his will was what I had to be honest with myself about. The “thy will be done” Is easier said than done.

I love this story because it shows how human Jesus was. He changed his mind about something: who he was sent for, who he could minister to, namely, even the gentiles. But he was persuaded and changed his mind! How very human!!

Sovereignty is an amazing thing. I am so pleased He can be entreated! Bless you Mary and thank you for your comment.

Thank you Salome! Glad it ministered to you.

Love this…”Jesus commended her faith ­– not her prayer, not her will, not her volume, but her faith.”
Also, “This woman didn’t care how humiliated she would be”.
Faith is willing to look stupid before men – because you MUST have God.

It seems that the faith this woman had in Jesus came hand in hand with the total lack of pride because of being so utterly rejected by man… I don’t think anymore that things like need, lack, solitude, etc., are “bad” and that one needs to pray them away. And neither do I think that “good things,” like excess, acceptance, even health and money, are not even close to being blessings to us…

What does it even mean to be a Christian walking around without faith in Christ Jesus… What do we think we are doing?!