Note: We highly recommend reading (or re-reading) the first two posts in this series by Martha before reading this one: “Seed Sown is Fruit Harvested” and “A Nightmare Chosen” Tomorrow’s post will be the conclusion…unless the Spirit has more to say on the subject.

God’s Father-Heart longs to give redemption always, but the lesson of our irreverent foolishness must be learned. It is only learned by living the result.

Joseph’s brothers sold him for twenty pieces of silver into Egyptian slavery.

And then they lived for (perhaps 13) years with the terrible grief of their father and the unsolvable guilt of their crime. This was the sickening fruit of their ‘return’ and they had to eat it for some 4,700 days. Destruction.

But Joseph saved his brothers from famine, but he did far more than even this. The wisdom of Joseph, by his own surrender, brought his family to repentance and reconciliation with God and each other.

For the Father, the Sentence is Paid 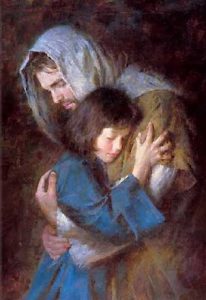 In spite of this immutable Law of Cause and Effect, there remains Grace, the ‘unmerited favor’ of God. Our hope rests on Christ, who bore the entirety of our terrible consequences…that we may enjoy His spiritual heritage we do not deserve.

The Prodigal’s waste and sin is inexcusable. Then and now. The son sowed seeds of corruption, greed, immorality, rebellion – the most vile of seeds. What parent could just dismiss such sin, betrayal and theft? What parent could instantly trust again such a child?

Our Father Rejoices at Repentance

Galatians 6:8a NIV
For the one who sows to please his sinful nature, from that nature will reap destruction…

The Prodigal tasted his consequences, and they were many and unbearable: rejection, starvation, poverty, degradation and shame, ruin and decay. He reaped the entire justice of his senseless living. Then “he came to his senses.” He saw it all as SIN, and by that understanding, he came to sanity. He saw himself in the light of God and he repented. Twice he said, “Father, I have sinned against heaven and in your sight” (Luke 15:18, 21).

The reckless son ran home to his waiting father and was redeemed so fully that his past simply vanished. He met no condemnation but more…no punishment! He was treated as if a hero, a conqueror, a prince! Such is the total turn-around that repentance effects!

Beautiful picture of repentance vs. regret. God says in 2 Cor: “For godly sorrow produces a repentance that leads to salvation, and He adds no sorrow to it, whereas worldly grief produces death.” Kind of like repentance brings freedom and Life but regret just brings bondage (sorrow, discouragement,etc) and death. The prodigal was going towards the father, conscious of how his actions affected his father; regret mourns for self and staying there produces death. Looking at Father = Life…looking at self = death. Brings to mind somewhat the same scenario with Peter and Judas . . . Peter, considering Jesus… Read more »

oh Bless you dear one, and may those who aren’t already receiving the C/D of the month, go to Shulamite.com or LivingChristian books and order your message for this month. Hearing your voice share these blessing of inheritance passed to our children’s children………this message expounds her messages on the podcasts and blogs to bring us as prodigals to the ABBA Father’s restoration.
Oh HIS Mercy is new every morning. THANK YOU, THANK YOU, THANK YOU