The following is an excerpt from one of Martha’s most dynamic and anointed articles, “Church on Fire.” I cannot read this without getting hungry for God and scared of Him at the same time. He is so much more than we think He is! May the Holy Spirit use this writing to bring you face to face with Jesus in a whole new way.
Happy Tuesday and hold onto your hats,
Jennifer 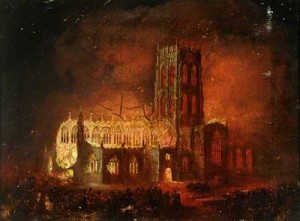 Many today would agree that the church is without fire. Numbers want fire but they mean the fire of zeal, devotion or evangelism. Feeling good and falling down. La-la land and visions of paradise. I love those too, but is there something better? The fire of Christ Himself?

Jesus spoke of casting fire upon the earth in Luke 12 and Matthew 10. “I came to send fire on the earth and how I wish it were already kindled!” He spoke then of His own personal fire: “a baptism to be baptized with, and how distressed I am till it is accomplished!”

Jesus brings fire. His presence creates fire. Here is His kind of fire, promised and delivered:

Do you suppose that I came to give peace on earth? I tell you, not at all, but rather division. For from now on five in one house will be divided: three against two, and two against three.

Jesus Came to Set His Church on Fire 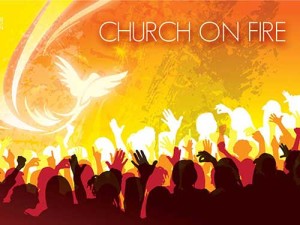 He came for the express purpose, the deliberate intent (do you understand?) of setting the world on fire, an arson of mankind, a torch to relationships until all of our connections exist only for Him. No fire of division? Perhaps no Presence of the Son of God. The disciples who trembled and ran before Pentecost, were transformed into the terrifying apostles of Acts.

Stephen was stoned because of the scorching blast of his long sermon, recounting the sins of the forefathers. He ended by saying,

“You stiff necked and uncircumcised in heart and ears! You always resist the Holy Spirit; as your fathers did, so do you. Which of the prophets did your father not persecute? And they killed those who foretold the coming of the Just One, of whom you now have become the betrayers and murderers.”
Acts 7:51-52 NKJV

This was the level of Stephen’s loyalty, clarity and zeal for God. Those who heard him were “cut to the heart” but turned with rage and stoned him to death. It was said of Stephen that he was full of grace and power. Full of the Holy Spirit! We don’t know this Holy Spirit.

This is a picture of a man filled with God? How shocking! One who preaches with so much condemnation for the audience that he is stoned for it? Ah, we would stone him also today and call him unloving and unchristian. We know no such passion today! Because we possess no such vivid loyalty! Paul said, “If anyone does not love the Lord, let him be accursed” (1 Cor. 16:22). A curse? But Christians aren’t supposed to curse people! Are they?

I am speechless. I beg for more understanding Lord. I have but a glimpse of what Martha is saying. Please bring more understanding and revelation to my heart of Church on Fire. Let me not be blinded by fear. Thank you for this ministry who is not afraid to boldly speak truth. Teach me Holy Spirit.

And let’s not leave out ‘but I don’t want to hurt their feelings’!

When Milton Green held the conferences in Dallas, TX in the 80’s, there would be times in God’s presence you could feel the fire… the burning. Didn’t understand it then. Glad you are sharing.

Whoa! In my daily reading today, I read Song of Solomon and of course was reminded of all of you there in No. GA. But more importantly, I was reminded of the passion with which Jesus loves His Bride. I am asking Him to fill me with that same fire of passionate love to burn in my spirit, soul, and body for Him. Thank you for this blog which ministers to me each day.

OH, I did continue to read “Church on Fire” and Martha got me on every point. This quote of Jesus, ” and how distressed I am, until it is accomplished”…..all of this writing has me on the floor..