Work is rewarding, but work is not romantic.

Recently, while shoveling snow off my driveway, my neighbor, busy clearing off his own, hollered across the tree line, “My wife asked me why I was shoveling off the driveway. I told her, ‘So I can get the car out to drive to the hospital after having a heart attack from shoveling the snow!’” I laughed because I was already thinking about the fact that work is just not romantic. 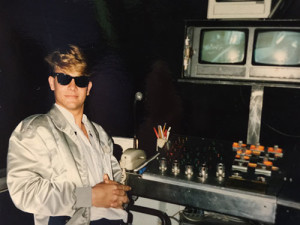 In the 80’s I worked for Disney. Although I had vowed never to work at this tourist attraction, there I was, working as a cast member on the rides 20,000 Leagues Under the Sea and Space Mountain. You know, I’ve found that God loves to break our “NEVER” vows.

Anyway, there I was working for the Mouse and it was magical. “I worked at Disney!” The characters, the underground city of support, everything being pristinely clean, the buzz of people enjoying themselves—it just was sparkling magic. Veteran employees called this “the pixie dust” phase. “It’ll wear off,” they would cynically say, “It lasts only 6 months and then it’s just a job.” Well, the romance of working at Disney maintained its magic for just about that long. Then came the dirty reality that it was just a job at a fun factory. The Magic Kingdom became less than magic. Now, don’t get me wrong, the workings of the Kingdom are amazing. But at the end of the day, work is not romantic, and because I had a less than perfect work ethic, it wasn’t even rewarding. I was just a teenager who wanted a paycheck and had to drive an hour in heavy traffic to and from Disney to get it.

Thank God I grew up and now value work. It’s very rewarding to do a good job. My time of being a shepherd, though completely thankless, was rewarding. I was blessed by a job well done and the fruit of my labor showed in the health of the flock.

As I work at Shulamite Ministries, I perform many of the behind-the-scene tasks which give me a sense of satisfaction but romantic? Nope.  Work is not romantic.  If I’m looking for it to maintain an excitement and mystery, I will be disappointed. Work only has satisfaction when I value responsibility and investment. Why? Because these are God’s values.

“The master said, ‘Well done, my good and faithful servant. You have been faithful in handling this small amount, so now I will give you many more responsibilities. Let’s celebrate together!’
Matthew 25:23 NLT

The reward given to the multiple talent servants for their good job was MORE responsibility, not a life of ease. The reality of the Kingdom of God is that it’s about work, now and in the future. It’s about responsibility. It’s about the reward for a JOB well done.

If you’ve read this blog for any length of time, you know I believe with all my heart that the work is to be performed by His life not mine. But that’s not to say I sail off scot-free. I’m rewarded with more and more responsibility and this gives me so much more satisfaction than a life of ease. God has set us up with the motivation to seek satisfaction, and the highest is being rewarded with Him saying, “Well done, good and faithful servant!”

The blog is spot on and even though I don’t “work” to earn a living this message speaks also to the volunteer workers attitude.

I don’t always have the opportunity to go back and read all the comments that have been posted so this morning I’m glad I’m a day late! I have throughly enjoyed the banter between you John, and Sam!

This message was SO timely–sometimes I think Our Father, knowing how I learn best, prepares me (and perhaps everyone in this body?) to hear the lessons in this blog…

Yep, that’s me, working at Disney in the control console for Space Mountain. I think it was 1988.
hahaha

That cannot BE!!! Un-believable. You seems like saying “I do not fit in here”. Everything is oldie and 80s, and you seem like saying… “look at me, all fancy and new-millenium guy planted in these old times…”

That’s what Jennifer and my doctor said too. I guess there could be worse things…OH THE 80’s!

HAHA… 🙂 For sure the 80s hold a lot of secrets of the Lord in you. Someday that biography will be known, and those secrets displayed. The “Patrick Swayze” years will be revealed as years of glory.

And so it will be for each of us… and that is a hopeful thought.

God has set us up with the motivation to seek satisfaction, and the highest is being rewarded with Him saying, “Well done, good and faithful servant!” Amen. I so wholly agree with this “reward” and “motivation”. I see it every day with little children. When they are motivated… kazoom! they just learn it at a blink… and the knowledge adquired remains with them. They go telling their parents, very excited… “do you know how a snail works”? (That was my experience today, they saw a little snail in a playground wall thinking it was a “piece of crap”, and I… Read more »

Mistake, I meant this:

In fact, He is the reward now (steward) UNTIL the full possession: “…He is the earnest of our inheritance until the redemption of the purchased possession, unto the praise of his glory” (1 Eph 1:14 KJV).

John, thank you for living your life before us “valuing responsibility” as well having the kingdom perspective”

You surely couldn’t write these blogs, you couldn’t make this up if were not allowing CHRIST to live HIS life in you