“God assumed from the beginning that the wise of the world would view Christians as fools…and He has not been disappointed.”
Supreme Court Justice Antonin Scalia 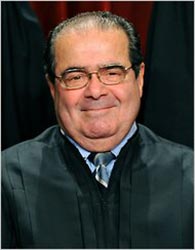 I’ve read many articles and blog posts and tweets about Justice Scalia over the past few days, and all of them were political. Even ostensibly Christian takes on the life and passing of Justice Scalia were incredibly political. That’s to be expected perhaps, but I’d like to take a moment to go a little deeper. I am not an expert on all things Scalia, just someone who’s found him fascinating and courageous for many years. This was a wise man who was labeled a fool by most of the world, and he was unmoved by it.

“A man who has made no enemies is probably not a very good man.”
Justice Antonin Scalia

Some of the worst things ever written or said about a human being have been written or said about Justice Antonin Scalia. He was hated as few people who’ve walked this earth are hated: widely, unrelentingly, bitterly, and unashamedly. His reputation was regularly impugned. His character was besmirched. His motivations were called base and calloused. His wisdom was called foolishness—if not downright evil. Yet Justice Scalia did not respond to the bitter hate that bombarded him with an equally bitter hate. And I find that worthy of a moment of silence.

I don’t deal well with the trickle of hatred that comes my way! I am undone sometimes by a single nasty phone call, so I can’t imagine the grace that Justice Scalia must have received to endure the steady deluge of hate that poured out on him every day without wilting under it. I’m sure he had bad days, because he was human. But Justice Scalia knew grace under fire and that gives me great hope. 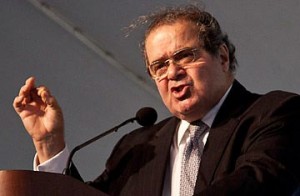 “Movement is not necessarily progress. More important than your obligation to follow your conscience, or at least prior to it, is your obligation to form your conscience correctly. Nobody — remember this — neither Hitler, nor Lenin, nor any despot you could name, ever came forward with a proposal that read, ‘Now, let’s create a really oppressive and evil society.’ Hitler said, ‘Let’s take the means necessary to restore our national pride and civic order.’ And Lenin said, ‘Let’s take the means necessary to assure a fair distribution of the goods of the world.’

“In short, it is your responsibility, men and women of the class of 2010, not just to be zealous in the pursuit of your ideals, but to be sure that your ideals are the right ones. That is perhaps the hardest part of being a good human being: Good intentions are not enough. Being a good person begins with being a wise person. Then, when you follow your conscience, will you be headed in the right direction.”
Justice Antonin Scalia

Most of the people writing positively about Justice Scalia right now acknowledge how wise he was and then lament his passing for what a blow it is to their politics. I can understand that because I’ve been there more than a few times myself, but that feels small and petty to me today. One particularly gloomy fellow seemed to fixate on the failure of Justice Scalia to turn the tide of history. How odd! Truly spectacular courage is remembered whether history is made to change course or not. 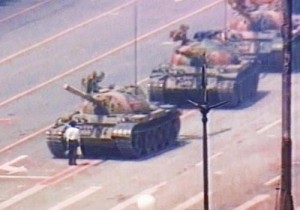 The unidentified man who stood in front of a line of tanks outside Tiananmen Square was too late to stop the massacre of thousands of students. He was too late to stop the army from gunning down men, women and children in the streets around the square who dared to witness that massacre. He didn’t even permanently stop the line of tanks from reaching their destination. We remember him because he made them halt for an eternal moment, a tiny figure facing down an engine of war armed with nothing but courage. That courage is what we remember. We don’t know that man’s name but we know that he had the courage to step in front of a moving tank and make it stop. He was also wise enough to know when to move out of the way again. He was a courageous man, not a savior.

That’s what struck me about the tone of these Justice Scalia eulogies: people were disappointed that he wasn’t a savior. It wasn’t enough that he was a courageous man, with integrity and passion and great wisdom. Because he didn’t turn the tide of history and save us from ourselves, there is disappointment where there could be astonishment. I have a Savior, so I’m not looking for one in the world of men. I’m grateful for the life of Justice Scalia, because it says that all the movers and shakers of the world can scream at you and rage against you and hate all that you are and do and lie about who you are and what you do and it all means NOTHING when your foundation is not of this world. What a gift of hope and encouragement that is to me! I hope that it’s a gift to you, too.

“If I have brought any message today, it is this: Have the courage to have your wisdom regarded as stupidity. Be fools for Christ. And have the courage to suffer the contempt of the sophisticated world.”
Justice Antonin Scalia 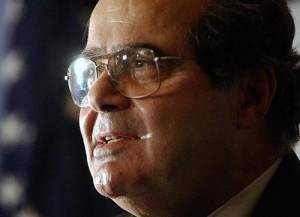 I re-read this again this afternoon. Thank you again Jennifer. These words are indistinguishable from the very apostles’ addressings to the church we could find in any NT letter.

And as commenters said… what a beatiful tribute.

Jennifer, thank you so much for this beautiful tribute! Oh, to be a fool for Christ…

As you said, Jennifer, so much is being written about Justice Scalia; but reading your tribute this morning was so refreshing and so beautifully expressed. Thank you for including so many of his own powerful words. May the legacy he has left live on for a long time to come.

Oh Jennifer, what a stunning tribute , Tammy’s word “refreshing” is spot on. I love Gaby’s sharing that Scalia was a Light to the world in Europe, I would have never known this. Sam and Hannah, thank you both also.
Thank you LORD for giving this servant to our Supreme Court for such a time as this!!!!

Great tribute. Like many wise men, history will show that they were wise after all.

Wisdom is vindicated by all her children. Luke 7:35

Yes, what a huge gift, Jennifer. Thank you!

Just want to say: This was a man who was SEEN in Europe.
However people would react to it, but you CAN be a Light to the world!

Thank you Jennifer.
In a world where some, if not most, of what I hear is negative and critical your comments are welcome and refreshing.
Love.