Have you ever noticed that men don’t do well without a fight? When there is the absence of a battle, we make one up. And more often than not we turn on ourselves when we don’t have a real enemy. I kinda hate this reality because it contradicts another strong motivation in man—living in peace. It is like we are a bit schizophrenic!

We have two dueling motivations, one looks to dwell in peace and the other gets bored when we have no battle. 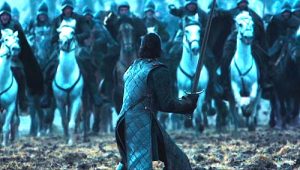 Here is a perfect scenario that shows the crippling of a warrior who has no fight. Look at Japan. No one could say that they weren’t a warring people. They epitomized a fighting warring culture. They were well on their way to dominate the world by force. And then the USA stopped their conquest with the H-Bomb. The back of the warrior was broken. And after their TOTAL surrender, the years that followed reveals the crippled nature of a culture that no longer has a fight. Look at the pop culture of Japan, this once strong warring nation has now dissolved into bizarre fetishes. They lost the fight and then lost themselves.

While I was pondering this all I came across an interview with Candace Owens who says that everyone is conservative when there is real world problems like war or economic depression. She continues that it is only in times of great privilege where liberalism finds a breeding ground. I am not making a political statement here, I am just showing that men need a fight.

Candace ends by saying, men need to triumph and if we don’t have an arena to triumph in, we attempt to find somewhere we can be victorious. She says, “People don’t know how to be peaceful in society!” 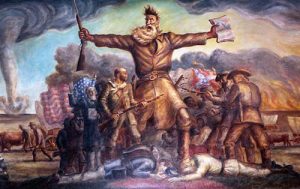 This so hits home with what I was thinking. It is like the Lord made us to war, and when we have peace, we make war. Just look around our country and you can see this writ large.

To look at the extreme put Patton or Churchill in a peaceful room and watch as they turn on themselves. Churchill called it ‘the black dog.’ It was a manic-depression that haunted him. Why? Why would a war hero and warrior be depressed, especially with such success? Because he wasn’t in a battle. He was designed to lead and for war.

I think that many of us are in this same position. You remember a post I wrote a few years back about Warriors Without a Battle? Check it out, it depicts this well and how men pick up mock battles because they have no arena in which to fight.

Here is the good news, it is the Light at the end of our tunnel. The Lord has given us a solution. We now have a literal fight thrust upon us. We are in the midst of a great battle. All spiritual warriors are being called up to fight daily for the Kingdom. We again have the war we have so longed for, right here in our faces. Will we fight the tyranny or will we fold?

In my next post I will talk about the battle.

We need something passionate to live for! Something to overcome! We have plenty of that within and without bringing the Kingdom of God to rule in and through us we just often get distracted as to what the real battle is and become comfortable and complacent.

I agree. Oddly, it seems the battlefronts are all coming to a head. I no longer think there is a secular battle and a spiritual battle. I think our current battle is literally a spiritual fight of Light versus darkness. Maybe we wouldn’t do the work through pray to defeat the enemy now there is no distinction. Here is an interesting video I saw on FB that seems strictly secular…but is it? https://fb.watch/2gC9kFrdnf/