You know, Satan’s temptation of us with blatant sin isn’t the only way we lose our inheritance? No, there’s actually a more sinister plan afoot. It’s an internal time bomb set to destroy us. And it is all but sufficient to ruin us. What is it? Hidden unforgiveness! Yes, harboring any unforgiveness is all that is needed to dismantle our lives, diminish our effectiveness, and cause us to lose our destiny.

I have spoken on this blog before about this very thing. And while many of us deal with our obvious offenses and unforgiveness, there is a covert plan against us which packs an equal punch. It’s listening to negative reports, whose goal is to keep us angry. Yes, the endless haranguing of negative reports found on places like FaceBook or in the News keeps us all on a low simmer. And if you don’t think it is purposed to keep us offended, let me share an example of this, which is what I believe is currently happening.

Unforgiveness and the Next Door Neighbor 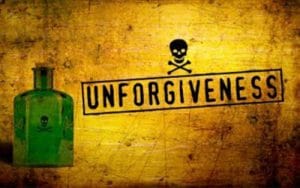 We had a neighbor at the farm. He was old and apparently innocuous. He would regularly come over for a “friendly” talk to  find out what we were doing. All this seemed rather benign but what we discovered was more malignant.

This gentleman would come and talk individually to us and oddly the conversations would always veer in the direction against the others. This man would stick in small daggers of offense. For instance, it was difficult not to make ruts in the river rock gravel driveway when pulling out, something the owner hated. This man would specially mention it to infuriate the owner against the workers. “I don’t think they even care!” All of a sudden this easily fixable thing would become a personal affront and reviling disrespect. See how easy it is to turn the tables?

What ended up happening is we found ourselves each maintaining a low level hostility and problem with the others. We were being purposely kept on a slow simmer which had the potential to undermine the whole farm.

I never found out why this guy did this. He has long since passed. Maybe it was jealousy, boredom or mean spiritedness. All I know is he was the stink in the pot. When we discovered what was being perpetrated, we put a stop to it.

Boiling Over a Simmering Pot 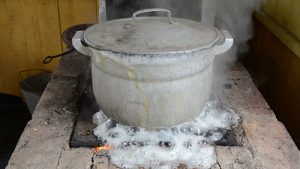 It is not difficult to get something to boil over when it’s set on simmer. I believe much of the reporting of our news media has been firing us up and keeping us at a slow simmer. I also believe it’s all Satan has needed to lay us up to boil us over. Look how people react to statements. If your opinion differs from another’s they may likely erect a guillotine to lop off your head.

Why, is the devil doing this? Well, a house divided WILL NOT STAND, cannot stand. As long as we focus all our energies against others, we will never be united nor built up. The US and THEM mentality is the true pandemic. It’s the enemies sleight of hand. We are being played, and while we are focused on hating each other, the enemy is selling us out.

I am not saying we need a kumbaya festival of compromise in order to be in unity, but every differing opinion is not life or death. And no matter our “world view,” God is still on HIS throne and my hatred and offenses just separates me from Him and His ultimate plan to bring in His Kingdom.

Love this John! Such a good message of guarding our hearts and mouths! James 3:9-10..”with the tongue we bless our Lord and Father, and with it we curse men, who have been made in God’s likeness. 10. Out of the same mouth come blessing and cursing. My brothers, this should not be!”