The only fixed point in the universe is God – the Father, the Son, and the Holy Spirit. When I fixate on any other point, divorced from the Person of God, I go blind. By fixate, I mean that I claim to “know” and consider it settled, mastered even. But as Carole so beautifully revealed yesterday, perspective is everything, and if I’ve planted a flag of surety in knowledge, I’m stuck in that place. I won’t see what’s over that hill or across this sea because I’m rooted at my point of “knowing.” Hence the title of this post: the more I know, the less I see the Truth.

The Delusion of Partial Truth 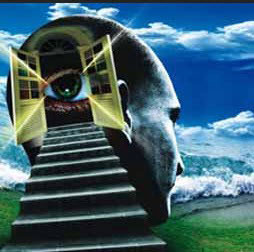 I’ve been struggling for a while now. If you’re a regular reader, maybe you’ve noticed. I’m not ready to write yet about the root sin that the Spirit is exposing, but I do want to tell you some of what I’ve seen that brought me to this point. The more I know, the less I see the Truth. I believed what I saw instead.

I always thought that delusion was attributing something to nothing, to see things as you’d like them to be, not as they actually are. But now that I belong to Jesus, there’s another type of delusion: to see things ONLY as they are.

Carole’s example of Elisha and his servant perfectly illustrates where I’ve been. The servant saw with earthly eyes only, so he saw only that the enemy surrounded them. Elisha prayed that he would see with heavenly eyes, and he did. The heavenly perspective was the whole truth of the situation. He just couldn’t see it before.

I, too, saw only with earthly eyes. I looked at one part of my life and said, “I know the truth here.” I didn’t ask the Lord what He saw, or He would have told me. And the voice I listened to wasn’t His. I heard, “You love the truth, and this is the truth. You know that. Accept it.” That sounded right to me, because I knew what was right. I just knew! So I made one small step toward the voice of the stranger, and several more steps and many months later, here I am.

“Faith is…the evidence of things not seen.” As a born-again child of God, I have access to the heavenly perspective and the whole truth of a situation. It’s no longer just foolish for me to claim that I know the truth about something when I see only what is; it’s dangerous rebellion. When I believe that I know about anything, especially myself, I am no longer following Jesus. I’ve set up my own camp in the wilderness and called it home.

The more I know, the less I see the Truth. Tomorrow I’ll tell you how God crushed a big chunk of my worldview and set me free.

Sam, you put it so brilliantly. “All of God is such a contradiction to my mindset. All of God is a releasing reality.” All of this weeks blogs have put their finger to this truth in a way I am stunned. Thank you for this; so timely a message. So important for the days we live in and so easily lost. Jennifer, “the delusion to see things ONLY as they are” – that hit deep. I do that so often. Your eye-opener yesterday changed all the way my day went. It did not change the way I looked at it,… Read more »

Thank you Jennifer , this really speaks to me. I’m going through this exact thing , thinking I knew the truth because I saw but not getting Gods word or seeing His perspective. It is indeed dangerous rebellion. Thank you for sharing this beautiful truth.

Don’t ask, he doesn’t tell. We must ask; then set our ears (hope) in him to listen.
Good word Jennifer. I was just seeing something very similar myself.

Thank you Jen. Your point is precious.