Ecstasy is a gift of the Spirit and fully part of knowing Christ. I admit I love ecstasy and I’ve had more than my share of bliss. But to have HIM in truth, we must primarily be with Jesus in simple ordinary living, which has its own ‘high joy.’

Humble doing and ordinary working. That is the thrust of life, the mainspring of life. Will you know Him in the dirt pile? Have you experienced HIS bliss of common labor? His burst of joy in the Father’s satisfaction rather than your own?

Arrogant greed for “spectacular happenings” is a dangerous delusion. A genuine walk is marked by “What do YOU want, Lord?” in disregard for ‘what I want, Lord”—and even disinterest.

The Bliss of Christ in Reality 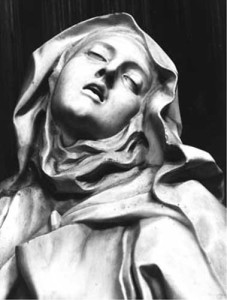 I’ve seen many who would never leave their lust for adventure and false ecstasy, to worship Him in genuine “spirit and truth” of reality. And they imploded into their own fantasy and fell away from grace.

The genius of John and Jennifer and Carole is that their feet are walking the earthy ground of reality. They all work at the ordinary, the mundane, and in the trench of life’s demanding, they meet Jesus down there. How Christ loves to work! He is in essence a servant of the deepest humility by way of abject surrender.

So these three take us to Him, down into their struggles and fallings. As He shepherds His sheep, they follow in actual pastures, fully gritty and real. They “worship God in spirit and truth (reality).” And He enters their natural wanderings and gently leads them to genuine bliss, the wonder of HIS joy over them, because of them! And that is the ultimate bliss, to experience God’s divine bliss under the gaze of His favor.

Jesus’ Bliss in the Father 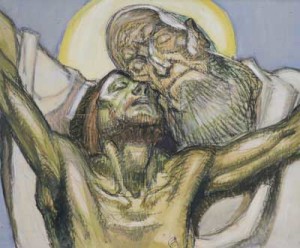 Consider Luke 10:13-21. Jesus had just been rejected by two cities where He had done miracles. How crestfallen we would be!

Then Jesus’ common, ordinary disciples returned from their mission in joyous victory over demons. And the Lord exuberantly rejoiced in the Father’s choice of “the childish, unskilled and untaught” (1 Cor. 1:26-29).

Jesus saw the Father’s outlandish grace on the ‘foolish and weak.’ And He loved God effusively for His condescension. To make of ordinary men, extraordinary champions! That was God’s intention with humanity. And it thrilled Jesus enormously.

“In that same hour He rejoiced and gloried in the Holy Spirit and said, I thank You, Father, Lord of heaven and earth, that you have concealed these things [relating to salvation] from the wise and understanding and learned and
revealed them to babes…

“Yes, Father, for such was Your gracious will
and choice and good pleasure.”
Luke 10:21 AMP
(emphasis mine)

“He emptied Himself and took upon Him the form of a servant…” That the Son of God would voluntarily leave His throne has been, not just a reality, but a continual amazement to me!
Thank you, Martha.

Letting Him be who He wants to be… in us. Thank you Martha for imparting all these treasures to us.

“He exulted in God, and His own blissful fulfillment came from the Father’s satisfaction.”
Isn’t this in truth what “The Joy of the Lord” is? It is our Lord’s JOY!

Thank you very much Martha.
Deception is subtle. His joy, pleasing Him, must be our ambition.

Ah Bruce! Great insight, thank YOU for sharing it…

Love this so much Martha=) It made my heart leap with joy.

Yes. May those who walk in this essence that you live in increase!

Sam, I am touched that you would turn to praying this for others!