A few posts back, I wrote about the destructive nature of our being narcissistic. In the comments, I told Linda that I needed to write a post on how I have seen the Lord work the self-absorption out of people, including my own self-focus. So today I want to write about a practical solution I have seen in my life and in the life of Henri Nouwen.

Now I have the utmost respect for Nouwen and his message. His books and messages have ministered greatly to me. The Way of the Heart is a must read. But his messages came from a man who lived tormented. In my reading and hearing of his life, what he suffered from was a deep narcissism. He was consumed, as many of us are, with self and his wounds. His wounding scarred his soul so deeply that he nearly drowned. But this isn’t the end of his story. God had the prescription to solve an obscene self-focus. 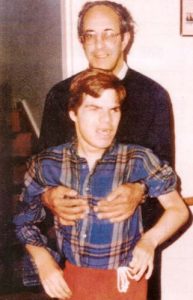 After years of living in a private torment, the Lord called Nouwen to L’Arche Daybreak.  There he was called to serve a man named Adam, who had profound developmental disabilities. Adam needed Henri to perform all his daily functions. This man needed help with everything, from eating to using the restroom. Adam was completely dependent on another’s life.

So why would God call someone completely engrossed in his own wounds and self to so completely serve another? This is the answer to the question as well as the question itself. Nouwen needed a complete reboot of his life and focus. He needed to be so absorbed in another’s life that he lost sight of his own morbid self-focus. Oh, how glorious is our God! 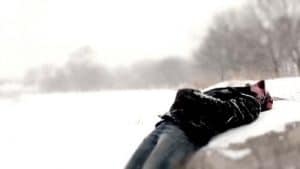 I’m not speaking of this as if I, too, haven’t had to have a reboot. I also had deep wounding which I chose to solve by saving my life and self-focus. I suffered from depression, shame, and destructive introspection. I’ve told many of the reasons on this blog, but for me it mostly sprung from a root of bitterness. Death arises from the strangling vines of a bitterroot just like kudzu. After a time, you no longer can see the source of life, only the shape of what it once was.

My healing came from much love, much forgiveness, and much of Christ’s Life and grace. My healing is still coming and probably will until the end of my days. But a huge part of my process was to get my eyes off of myself in service of another. The ‘other’ started with being a shepherd to sheep and goats but then led to serving Martha. She and I have walked through much and the Lord trained my eyes to see another as more important than self. Both Nouwen and I were placed in a position of death of self through service and love of another.

Is This the Answer to Everyone’s Self-focus? 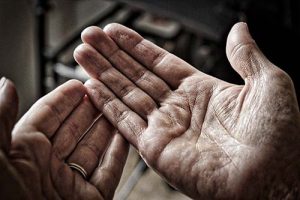 I’m not saying that everyone who is severely wounded should just go focus on someone else in service. Actually, I’m not even saying that this is the way God always deals with narcissistic self-focus. All I’m saying is that for Nouwen and myself, this was the prescription. Serving Adam killed Nouwen’s narcissism. Being a shepherd and serving Martha has done the same for me. It is a death to give yourself so totally for another’s life. Yet I believe it was the saving of both Nouwen’s and my life.

We lose our life when we attempt to save it. Obscene self-focus is a preoccupation with self in order to save self. But it has been my observation that as God directs us – and only through that direction – He saves us from that morbid entanglement of self. As His Life is lived in giving, serving, loving, and dying for another, we come into wholeness and freedom.

But now, by dying to what once bound us, we have been released from the law so that we serve in the new way of the Spirit, and not in the old way of the written code.
Romans 7:6 NIV

John, thank you so much! May We all serve in the “new way of the Spirit”. As the Lord leads me in this journey of death to self, I am encouraged by His promise:
“And after you have suffered a little while, the God of all grace [Who imparts all blessing and favor], Who has called you to His [own] eternal glory in Christ Jesus, will Himself complete and make you what you ought to be, establish and ground you securely, and strengthen, and settle you.”
‭‭1 Peter‬ ‭5:10‬ ‭AMPC‬‬

Perfect scripture. Do you feel I hit the point well? It is such a work of the Spirit and a Holy thing. God bless you Vicki!