I’m reading a book about how trauma and abuse physically affects our bodies. This book shows how the body is literally like a scorecard keeping a record of life’s events. I think it’s fascinating how our physical bodies can manifest our pains. I’ve personally seen many people who carry the evidence of their life and choices, especially on their face. It usually takes a lifetime but inevitably it will manifest.

For instance, I know a lady who was stern and rarely smiled during her life. As she grew older, this attitude conformed her appearance, making deep, permanent furrows into her face. She now is the persona of her choices, a stern old lady, displaying it before the world.

Yet it’s not only our faces that carry memory, it’s also in the rest of our bodies. Our muscles, digestive tissue, brains, joints, the list goes on and on. We carry our history and the choices of how we dealt with it, in our bodies.

Holding Abuse in Our Bodies 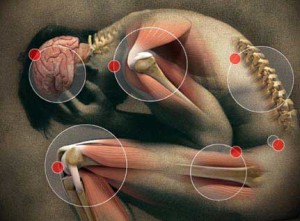 As for me, I regularly receive massage therapy. For years I was an anxious man and this stress affected my body in multiple ways. Yes, my sin of anxiety was recorded in my body and it took its toll.

So while I am reading about abusive scenarios in this book and how the bodies responded to the trauma, I’m trying to hear what God’s saying to me in this.

Much of the findings in this book are about how our relational environments affect the physical body. It looks at those who come from abusive situations and traumatic experiences, who bear the negative effects in their physical frame. And as most of psychiatry does, your personality is held in large part by your environment. I believe this to be true, as far as it goes for fallen human man. But this doesn’t factor in our born-again experience.

Freedom from Power of Abuse 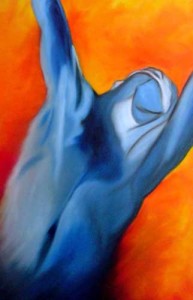 When I am born anew, I’m made fresh. Though the effects of my environment have to be processed within God, my environment doesn’t have to imprison me. Choice is always a major factor in dealing with abuse and trauma. Choice is my power, given to me by God. It’s that choice that I want to discuss today. How unfair it would be if my environmental rearing could constrain me from my future destiny!

Pain, abuse, and trauma seem to be inevitable in this world. We all have varying degrees of abuse: verbal, mental, emotional, sexual…from parents, siblings, teachers or strangers. This fallen world is abusive! But what isn’t set in stone is how I will respond. I’m not contained within the walls of my abuse and trauma.

What I sow, I do reap. This is a spiritual and natural law. But the scorecard of sins and abuses in my body can be zeroed out. We born-again believers have a different reality that can take effect: the payment of Christ, the forgiveness of sin, the cleansing blood and the God who makes all things new.

God redeems the scorecard of my abuses and traumas. In His sovereignty, what’s seen as abuse can be made into blessing! While reading the accounts of hideous abuse on mostly children, I know their scars are from wounds that were inflicted upon them. Some of these wounds may follow them to their graves. But although we’re often powerless to prevent some of these tragedies, I do have the choice of my response. No one has the power to take that away.

A mob quickly formed against Paul and Silas, and the city officials ordered them stripped and beaten with wooden rods. They were severely beaten, and then they were thrown into prison. The jailer was ordered to make sure they didn’t escape. So the jailer put them into the inner dungeon and clamped their feet in the stocks. Around midnight Paul and Silas were praying and singing hymns to God, and the other prisoners were listening. Suddenly, there was a massive earthquake, and the prison was shaken to its foundations. All the doors immediately flew open, and the chains of every prisoner fell off!
Acts 16:22-26 NLT

It’s so awe-inspiring to consider how intricately connected we are: Body/Soul/Spirit and how what happens to our bodies affects our souls but how the choice of our responses can radically affect our spirit. Some carry embittered spirits because of their traumas and that is often seen on their countenance; while others are transformed into the likeness of Christ because of their godly response and turning to Him. So much food for thought…thanks John for this powerful post!

Thank you John!
This post reminds me of the hope in Christ we have and the power that is in His blood not only to cleanse us but to free us to be more than conquerors as Paul and Silas overcame their perilous circumstances by turning to Christ and lifting Him up.

Thank you John, for this beautiful message. “They were praying and singing hymns to God”, and then the only explainable in GOD release from chains and prison to freedom and it’s following,the listener’s. God always does the ‘much more’.