Here is an interesting thought. If when we are warring in the spirit we are focused on man rather than Satan, the devil wins. It is so easy to swat at visible sources rather than the true source of our fight. Yet this just scratches the surface and actually weakens our battle. Fighting man is not our actual battlefield, our war is not with each other but our enemy.

The devil loves for us to fight each other rather than him. That is a simple win for him—God’s creation thrashing against God’s creation and not him. Now, it isn’t as if the person coming against us might not be the tip of the spear which skewers us, but they are only the tip. The wielder of the actual spear is the devil.

Our War Is Not People 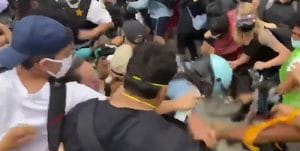 Our combat and focus against the enemy rather than man is more effective in warfare. For we wrestle not against flesh and blood but against a spiritual enemy. Let’s look at  Ephesians 6:12 in a few different translations.

“For our fight is not against any physical enemy: it is against organizations and powers that are spiritual. We are up against the unseen power that controls this dark world, and spiritual agents from the very headquarters of evil.”
Ephesians 6-12 Phillips

“Your hand-to-hand combat is not with human beings, but with the highest principalities and authorities operating in rebellion under the heavenly realms. For they are a powerful class of demon-gods and evil spirits that hold this dark world in bondage.”
Ephesians 6:12 TPT

This scripture makes our actual fight so real. While we are witnessing the masses going mad, fighting and cursing against each other, our real enemy laughs. The separation and divisions we are experiencing in our country is a fabrication to keep us off the real agenda which is our relationship with God and warring against our actual enemy. As long as we are squabbling in fear with each other we are ineffective and distracted. 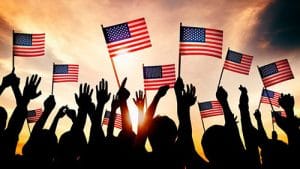 While walking I had a seeing that made me hopeful. In my life I have witnessed many times when the United States was truly united. All of us as a people. In these times we came together as one people, under one flag, under ONE God. It raises the spirit and encourages the soul to have peace and unity in our land. Division, on the other hand, is intended for all those following the enemy’s diversion because when we are divided, we are fodder for his fire. It is a tragedy!

While this can be deeply discouraging in the moment of discord, there is another end to this scenario of our warfare. It’s encouraging. Both the tip of the spear and the wielder of the spear only can be used for a greater plan in our life by the Authority of All. Look at Luke 22:31, “Simon, Simon, Satan has asked to sift each of you like wheat.” While these times of great turmoil can be disheartening. Ultimately, the sifting of the devil is just God using him as a tool to purify us. Our enemy is allowed to go here and no further.

In light of everything that is going on, I can tell you I am super excited for my book The Sovereign Touch to come out. It is a huge testimony of THE ONE over all, even what is currently happening. In the next few days I am going to share from it in preparation for its arrival.

Thanks for reinforcing who our enemy is!! Looking forward to your new book!

I think you really are gonna like it Wynona. And I am going off to run my final proof on The Great Exchange next week. The Lord is moving! Thank you for your prayers! Love you!