When I first saw the title of John’s post, “Worship God with My Anger,” the word that popped into my head was ‘provocative.’ And as I read it, provocative proved correct, for I was provoked. This post provoked wonder and doubt and curiosity. But mostly it provoked a question: “Dear God, what does that even look like?!” And yesterday God answered by showing me what it looks like to worship God with anger.

I met with Martha and Carole to pray over some pretty big situations that had developed. Martha was weeping as she told us how angry she was at God over these situations. She said she’d spent the morning grappling with that anger, confessing it to God, telling all the why’s and wherefore’s of that anger with Him. She was wracked with discouragement and felt like she couldn’t get clear to His presence. So we prayed.

Habakkuk on the Ramparts 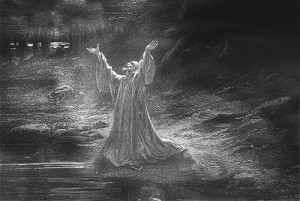 Quite perfectly, the Spirit took us to Habakkuk. And in Habakkuk was a word that brought peace to Martha’s heart and a balm to her spirit. “For the vision is yet for an appointed time; But at the end it will speak, and it will not lie. Though it tarries, wait for it; Because it will surely come, It will not tarry” (Habakkuk 2:3 NKJV). The big situations were still big and still looming, but I watched God settle Martha’s heart. That’s when I realized that the Lord had showed me a real, live example of what it means to take the not-so-pretty parts of our hearts and yield them over to Him, as “a living sacrifice.”

Like Habakkuk, Martha poured out her angry heart and her doubts and discouragement. And she poured in full until it was all out of the heart and into His Light. Hours were spent yielding over her heart completely. She then thanked God and waited for His correction, for His word to her—she waited for Him. And based on what I witnessed, God found Martha’s sacrifice of worship to be utterly acceptable and pleasing to Him. But she was discouraged with her discouragement.

I told Martha that it was her worship to give God the anger, just as in John’s post! And  it redeemed her whole dreadful morning. That’s pretty huge actually. I’ve judged myself very harshly for many a morning like the one Martha had. Even after the Spirit settled me, answered me, and loved me, I still felt terrible and terribly ashamed that the ‘outburst’ had to happen at all. I rarely if ever connected it with the story of Habakkuk, and I certainly never saw it as an act of worship. I just saw it as a necessary honesty that was nonetheless regrettable in every way.

I can see now that there is no short-cut here. “Turn and keep on coming to Me with all your heart” is not a shallow dealing with God. It’s a wrenching, pouring out before the Lord that leaves us totally exposed and vulnerable to the truth of what we really think and feel. Like Habakkuk, we may know we’re in the wrong about life and people and Him, but we have to get it all out in truth or we’ve yielded nothing but fantasy and sentiment. Martha poured out the truth, and the Lord took the angry, discouraged parts of her heart and filled them with His own surety and faith.

The Gift of Habakkuk 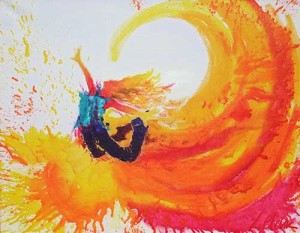 It was a great privilege to bear witness to the oh-so-transparent move of the Spirit in Martha’s life, and I’m still taking it all in. I watched Martha take her whole mess straight to the Source. Though the enemy might play a role, he still answers to God Almighty in every respect. How amazing to see the fruit of acknowledging God’s absolute sovereignty under less conventional circumstances! “For even though they knew God, they did not honor Him as God or give thanks…” Two big conditions that bear abundant fruit when met.

Though the fig tree does not bud and there is no fruit on the vines, though the olive crop fails and the fields produce no food, though there are no sheep in the pen and no cattle in the stalls, yet I will triumph in Yahweh; I will rejoice in the God of my salvation!
Habakkuk 3:17-18 HCSB

These weren’t empty words that Habakkuk uttered. These are the words of a man who has worshiped God with ALL of his heart, honoring God as GOD by taking every last care and woe right to the top. Carole found this in her Spirit-filled Bible: “Although everything is wrong in Habakkuk’s external world, he is leaping for joy over his fellowship with Yahweh.” There’s a special joy, an exultation available to the Habakkuks. I know because I’ve witnessed it in living color.

Faithful Holy Spirit – all we ever need.

What a beautiful explosive painting of spirit filled worship.
Thank you.

I read about Gideon telling The Angel of the Lord in Judges 6:13…”O Sir, if The Lord is with us, why is all this befallen us? ” and v:14 “The Lord turned to him and said, Go in this your might, and you shall save Israel from the hand of Midian…”

When I read this post, I remembered that I thought The Lord must have meant that Gideon’s might could perhaps be his honest heart before The Lord!

What else do we have, really?

Love and peace to you!
xx

This post renders me speechless…I’m with Sam and Gaby: the depth and profundity of these recent posts have been so much food for the soul…I feel I can hardly take it in. Such riches that require “soaking”!

Thank you, Martha, John and Jennifer for allowing your lives to living epistles known and read by all.

Interesting! I was given Habakkuk 2:2-3 a few years ago..I didn’t understand it. And then, yesterday, it was given again…and now again today. I’m so excited to see what exactly it’s all about. It’s always so exciting to see the scriptures so alive and active!
I’m going into a time of being alone with the Lord and I believe it’s a time set apart for me to cry OUT. This blog post confirms this for me..thank you!

Oh, my! Will He ever be done emptying me of me? How I love the reality and transparency of this Shulamite ministry. Thank you, thank you

All I can do is join everyone else in saying thank you! It isn’t even enough. I join Gaby in saying thanks to the Lord and thank you Shulamites! Simply amazing and so timely!

I just pondered how He would lead you all just deeper and deeper into even what you had seen before,
and how you would take us with you on this journey right into Himself!
If you Shulamites had only written these last two weeks of posts, and if this had been all you had ever written, it would be rich enough to feed the world!
Thank you from the bottom of my heart!

If you Shulamites had only written these last two weeks of posts, and if this had been all you had ever written, it would be rich enough to feed the world!

Ahaaa… you explained it so nice. It is the brilliant Resurrection Life.

Wow, yes, Sam, even the Lord Himself took His feelings to His Father in honesty…didn’t see that before! I cannot put into words, how liberating these recent posts had been for me! I never dared to do that; but if not, our feelings remain just the same – and we start into hidden rebellion! I praise the Holy Spirit how reliable He really is, bringing you back to exactly Habakkuk: In the chapter “Habakkuk” in “All and Only” Martha wrote: “Some will never say to God’s face what they imagine He doesn’t hear in their hearts”; thank you, Martha, that… Read more »

Again I stand amazed discovering the God you all worship and I join you.

Oh, Jennifer!!! Bless you! While reading you, it came to me our very Saviour, while at Getsemani. He was being “Habakkuk” while sweating blood run down His head! Like you say… “It’s a wrenching, pouring out before the Lord that leaves us totally exposed and vulnerable to the truth of what we really think and feel”. The Lord of the Universe had to do that work too… and He came to the conclusion that HE DID NOT WANT THE CROSS. He didn’t want it, He didn’t like it. THat’s why He was so honest with it… “Father, let it pass… Read more »