Today I’m going to give a kind of controversial message. Most have a complete mental separation where the Church and the world never meet. Some believe that God ONLY speaks through His Word, while this is emphatically false. While everything must bow to the Truth of the Bible, God isn’t relegated to only speaking via the words in the Bible. Again, He never contradicts His Word because He is the Word, but His speech isn’t solely confined to opening the Bible. The Lord speaks in many ways and on many fronts. In actuality, He is continually speaking to us, it is our job to be listen. So will we accept His Voice if He uses Hollywood? 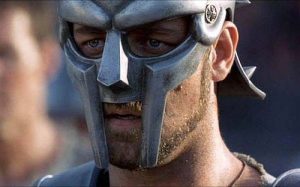 Hang with me and see if this doesn’t bear witness with you. Today I’m going to give the reason why the Lord can sometimes use Hollywood to speak some of His most impactful visual aids? You know the Lord Jesus loves a good parable. He proved that when He lived physically among us. He used common everyday experiences to communicate divine and eternal Truths of the Kingdom. From backyard buried treasure, wheat and tares, laborers in the vineyard, talent servants, tenant farmers, new and old wineskins, and the list goes on and on. Jesus loved connecting His deep spiritual Truth with our living reality.

Why did Jesus use parables? Think about it, to communicate most effectively you have to speak in the language of the hearer. And Jesus did just this. He spoke to an agrarian culture with agricultural terms and object lessons. It is absolutely fascinating! Tying deep spiritual meaning to common occurrences makes the message more understandable and sticks in the mind of the hearers so much better.

God Speaks How He Wants

I believe the Lord speaks through nature, situations and circumstances, and uses many object lessons to connect His messages to us. He speaks to us in our common lives using everyday things because this is what we know. And actually the more senses that are activated in His telling, the deeper the impact. For instance, if I am shown or given a mental picture in the telling of something, I am more likely to remember it over just hearing a message. Frankly, the Lord isn’t limited to our religious sphere to convey His spiritual messages. From the mouths of babes comes praise (Matt 21:16) to the rain (and wisdom) falls on all the earth, irrespective of people’s beliefs or practices (Matt. 5:45). The fact is God speaks beyond our acceptable religious structures. Why? Because Christ promised if His people did not praise God, the rocks would cry out (Luke 19:40). So is Hollywood a crying rock?

Here is a thought, the Lord uses Hollywood because the church has for so long not had the guts to speak some of the hard gritty Truths. Singing rocks anyone? The church winces at the guttural cries of the Spirit, while Hollywood has no scruples in presenting these shock and awe messages. Hollywood runs on the edge all the time pushing the envelope beyond what is socially acceptable. Now not all that comes out of Hollywood is God, God forbid! But when He does use Hollywood, you can often feel the prophetic nature of the Spirit. I love it. 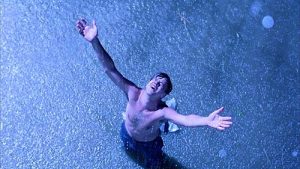 If there is anything we can learn from the life of Christ as He walked on this earth, He was utterly real and dynamically piercing in the relevance of His messages. Often we find Christ addressing messages that may be considered too real. Think about it, Jesus was the one who gave a message that was interpreted by the religious as to be condoning cannibalism. Jesus said, “Eat my flesh and drink my blood!” (Jn 6:56) These were utterly shocking words to a culture that refused to listen to the Messenger of such grotesque imagery. And because they didn’t hear Him, they lost His deepest most intimate message for all those who would hear. ”Take Me in, we can be one. I am your Manna, and I am your blood sacrifice!” Those who refused the unorthodox message missed the deeper meaning.

So with Hollywood being a vessel to deliver a message from God, what am I talking about? Let’s take movies like Gladiator, Braveheart, Matrix, Shawshank Redemption, The Green Mile and the like. All worldly messages yet with a deeper hidden message for any who would hear. Am I saying God can use even a jackass to speak….YES! (Check out Numbers 22)

These movies each had a prophetic message with a huge stumbling block—they came from the dirty soil of Hollywood. And why would Christ have to use this less that holy vessel? Because, quite frankly, the church often won’t be the body of Christ to the world.  We tend to fear messages with a sharpened point. We might offend, we might lose supporters, or we might not be seen as good. Essentially we can fear being the tip of the spear, so we remain a spork. You remember those utensils from Kentucky Fried Chicken? Neither a fork or a spoon, a hybrid only good for shoveling. When we, the church, are in our spork posture we are useless to pierce and demoted to only scoop.

Hollywood: Not Infallible But Effective 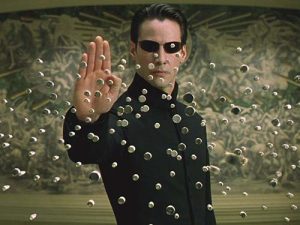 Now I’m NOT saying that Hollywood is in anyway infallible, but what I am saying is that it is often vocal while the church can remain silent. They more than likely have no idea that they are being used, but God is that sovereign. The Lord is going to speak. This is undeniable! And if we, the Body of Christ, refuse to speak the deep prophetic truths for our times, He will use any ole donkey in the way.

Jesus said, “The words [Greek: rhema] that I speak to you are spirit, and they are life.” (Jn. 6:63) When Christ chooses to speak we are given opportunity and privilege to listen. To resist His choice of vessels is to resist Him. As for me, I will go through this world listening for my Shepherd. If He wishes to speak to me via a street sign, a stranger, a movie, a pastor, His audible voice, a circumstance, His Living Word, or whatever way He chooses, I will hear because this is my intent. His voice is too important to me not to listen. His words are LIFE however He chooses to speak.

The words that I have spoken to you are spirit and are life.
John 6:63b HCSB

On the same page my friend!!? How could it be other than ALL of creation, a canvas of The Creator!! And what you said to Tammy!! Even those who “are against Him.” It’s not that because He speaks through something that that thing is “pure”! It’s that He chose to speak and we chose to listen! And speaking of so many great movies, I have to mention animation!?? Have you seen The Little Prince on Netflix?!! It’s powerful – especially because of the child’s heart in it!❤ And the art is breathtaking! I could watch it over and over with… Read more »

You know Sandy, it is like some don’t believe that this whole earth is not owned by the King of Kings. He is able to speak as He likes, when He likes, through any means He chooses. This whole world is His canvas to speak to His creation and His Bride. I know you and I will hear His Voice wherever He chooses to speak.

Love you my sister!

I agree with you whole heartedly John! We serve an awesomely adventurous God who, I believe, uses every method available. And if there isn’t one available, He’ll create it. I think it takes being a believer to see His messages in these strange places and even then as a believer we need to EXPECT Him to show up EVERYWHERE and in EVERYTHING (did you already say that? ???) or we may miss Him. Along the lines of movies – there are also those productions where I think we can see warnings of things to come. I’ve shared my thoughts about… Read more »

It’s all about listening to His Voice, isn’t it?! Funny, someone can see and hear the exact same thing and yet miss the point altogether. Why? Because only His sheep hear His Voice. I think the oddest thing in this is the fact that God can use those completely unaware they are being used. He can speak through those who might not even know Him, or in fact, are against Him. We serve a mysterious God!

Love you too Tammy!

Braveheart hit me hard the first time I saw it. I heard a call for freedom deep inside and surrendered to God to pursue it. The Truman Show was another one with a powerful message. Thanks for sharing these thoughts. And more recently the series Rectify on Netflix undid me to the core!

It is all about listening, isn’t it Tina?! So glad to hear from you and see you commenting. Thank you. Praying you are well my sister.

Rectify’s message had a personal impact on me and the Holy Spirit used it deeply but it probably will not have a clear spiritual message for most except for a great need to not judge others or circumstances. It is real and raw and several scenes may need to be fw.

All we can do is be the change we want to see. He doesn’t have to use rocks if you and I will speak. Bless you Judie!

I once worked in a casino. Not exactly the kind of place you would expect a disciple to be working, in more ways than earning a living. Yet, there I was. At one point, my daily bread became scarce, and I was tempted to worry. A similarly desperate woman came into the casino. Her plan was to gamble for the money her daughter needed for her college education. She knew it was foolish but she had nowhere else to turn, having exhausted all other options, including friends and church. The short story was a lucky streak never seen before or… Read more »

So true Don, cool story! It is so important to know He will use anything, anywhere, anytime to achieve His purposes. The day we close our hearts and spirits is the day we are robbed of His move. The solution is to always live listening and seeking The Shepherd. He is speak continually, and if we relegate His voice to only certain ways we will miss a whole lot of communication. He just will speak in our lives, often using the most common of means. He is that desirous that I hear His Voice and Will. I think it is… Read more »