For years some people have yearned for the singularity. What is that? The singularity is a tipping point in the advance of artificial intelligence. Additionally it is the point in time when we will be able to transfer our consciousness into a new, artificial body. Or to state it another way, the singularity is when we can upload our brains into computers. Imagine, you can have a cloud-based consciousness, forever! Hackers anyone? Creepy, huh? There is a race to achieve this by some because…we are in fact mortal. If they can just beat the time clock of their own mortality, than they can punk the system and win immortality. Whose system? God’s!

Searching for the Singularity

Why do the nations rebel and the peoples plot in vain? The kings of the earth take their stand, and the rulers conspire together against the Lord and His Anointed One: “Let us tear off their chains and free ourselves from their restraints.” The One enthroned in heaven laughs; the Lord ridicules them.
Psalm 2:1-4 HCSB

This is just our search for immortality with a modern, digital twist. It’s not uncommon or new. We have sought the fountain of youth (to avoid death) in a number of countless different ways since the fall. It’s even in our folklore and stories: Greek myths, Dorian Gray, Highlander, the Holy Grail, elves of Middle Earth, Vampires, werewolves…the list goes on and on. Yet these are the things that nightmares are made of. Immortality for the flesh is just not a good idea.

“My Spirit will not put up with humans for such a long time, for they are only mortal flesh. In the future, their normal lifespan will be no more than 120 years.”
Genesis 6:3 NLT

The Singularity Makes ME God 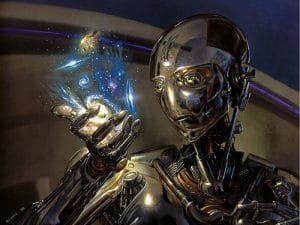 The cry is, “If immortality could be achieved then we would make ourselves deities. Yes, we would be gods!” See, this isn’t a foreign desire; it has been within us since the Garden. I want no consequence for my sin, I desire no need of God in my life, and I hanker for the ability to know without having to inquire of God. I want to be the GOD of my universe. The singularity is just a sci-fi take on our long held desire.

“Look!” he said. “The people are united, and they all speak the same language. After this, nothing they set out to do will be impossible for them! Come, let’s go down and confuse the people with different languages. Then they won’t be able to understand each other.”
Genesis 11:6-7 NLT 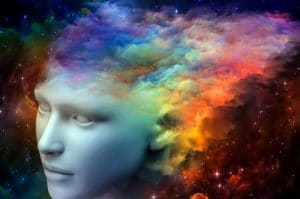 Nothing impossible! Whoa, that is frightening. Imagine, the corrupt nature of man, given a free pass to devise more and more evil! As per Brother Lawrence, “As for the wretchedness and sins about which he heard daily, instead of being astonished by them, he was on the contrary surprised that there were not still more of them, considering the malice of which the sinner is capable.” A disassociated consciousness from its God-given body is certainly sinful malice. It waves its fist to say, “No God, I will rewrite my story, formulating it by MY DESIGN!”

You can make many plans, but the Lord’s purpose will prevail.
Proverbs 19:21 NLT

Our desire for immortality and the singularity is firmly established in the heart of man, and amazingly, God Himself has given us a solution to satisfy this deep desire. We can live in the singularity now – a divine singularity. And as opposed to the wickedness of independence from God, it brings us into perfect union with Him. 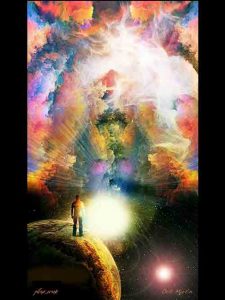 The divine singularity is found in the divine mystery of the gospel—Christ in you, the hope of glory. The Mystery of the Gospel fulfills my earnest desire for immortality. This Mystery satisfies my desire to have my consciousness uploaded into a Greater Database. I can experience the greatest sci-fi known to man – Christ Himself living His own Life in my body, while I dwell with Him in the heavens – now. Just think, all this while I witness it happening through me, and by doing so I get to learn who He is. There’s some sci-fi singularity for you! Him in me, as me, while I watch Him be me. As I have said in other posts: “Christ’s life as my life is His life in my life, and that’s not my life as His life.”

Excellent post. So much needed awareness here on both fronts and a good reminder that there is nothing new under the sun just different packaging.

Yeah, no matter how technically superior we may feel the core is still just original sin. Packaging is a perfect way to put it. Glad you enjoyed it Seth, appreciate you commenting.

This was very well written. I’m sharing this with those I know who are in the computer and software engineering field.

Thank you Bruce, I am so glad you liked it and hope they will too. See you soon my friend!