It’s becoming far too common for people to prefer to live in delusion rather than reality. Living by presumption rather than living by the Voice. I have witnessed a lot of this recently. For instance, I saw a woman claiming the authority of Christ to defeat Hurricane Irma. She demanded Irma to go on its way back into the Atlantic. She claimed that because she was a daughter of the King, and Christ had the authority, so did she. Her antics weren’t an issue as such, the problem was that she was teaching and training people by and in this willful presumption. It was frightening, and I knew it wasn’t reality but delusion. 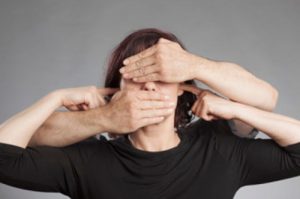 I witnessed another man and woman attempting to rebuke and pray cops away from their car after being pulled over. That’s right. They verbally lambasted the police officers, with rolled up windows of course, saying the police officers were demons.

Neither of these scenarios worked out too well. The officers busted through this couple’s windows, held them at gun point until they could cart them off to jail. And while Irma seems not to have been the catastrophe it could’ve been, it did ride Florida and Georgia like a carnival trip.

My spirit recoiled at both of these presumptions. Each of them ran counter to the actual Life of Christ and in complete opposition to His Kingdom order. The Life of Christ in His children functions by the Will of God and the Life of the Spirit. When Christ was on this earth, He relegated Himself to the will of God, so why wouldn’t I have to live like this as well? The answer is…I do! 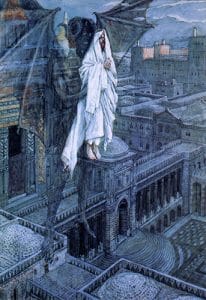 Even Christ got tempted by Satan to jump off the parapet and move out of presumption. “Go on, Jesus! You don’t need the Voice or the Will of God, just dive off and take a header off the Temple. It won’t hurt, the angels will catch You!” Yeah sure, Jesus. Force God’s hand to save You and rebel against His Will and Life. Oh yeah, and annihilate the plan of salvation with an epic fail stunt. It’s just as common for us, too. But we will have to live listening – just as Christ did – to remain in Christ’s Life.

Then the devil took Him to the holy city, and set Him on the highest ledge of the Temple. “If You really are the Son of God,” he said, “Throw Yourself down. For the scripture says—‘He shall give His angels charge concerning You,’ and ‘In their hands they shall bear You up, lest You dash Your foot against a stone’.” “Yes,” retorted Jesus, “and the scripture also says ‘You shall not tempt the Lord your God.’”
Matthew 4:5-7 Phillips

Jesus did nothing that He didn’t see the Father doing (John 5:19). Jesus Himself lived listening, not deciding. He didn’t determine the Will of God, He followed it. I, too, must come listening about any and every situation. Irma was mine to inquire about and hear, not direct. No matter how much I wanted it to be diverted, I wasn’t going to step out in presumption to assume that I could demand its retreat.

Just because something goes against my will doesn’t mean I have the power to refuse its existence. That cuts God out of the dealing altogether. This is delusion and presumption, not reality. I completely understand the desire to control my world. Especially when I am afraid. Sure, I can hop up on my own mast with Sargent Dan and wave my fist at God and the circumstance, but this doesn’t mean I will move even the smallest drop of water.

I am to live dependent not demanding! Man naturally lives in the independence of presumption. This is no surprise, but the true children of God cannot function in this delusion. My reality is the Life of Christ not my will. 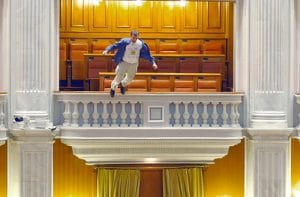 Over my last few posts, I have shown the division between the soul-flesh-life and the Spirit reality. Here is one reason my presumption will never ever win: it’s not faith. The motivation behind most presumption is fear. I might be determined in my delusion, but the fuel is usually my fear of losing control. This can never prevail! The only thing that pleases the Father is the life of faith. In order to have faith, I must hear what the Will of the Father is and then receive His gift of Faith. It was faith not presumption that Christ used to calm the storm, and only that faith had the ability to redirect Irma.

I believe there were saints praying in the Will of God by the Life of Christ. I believe we did see evidence of their prayers and faith. But it certainly wasn’t the doings of the presumptuous voices screaming into the wind.

In my union with God is where I find my reality, not in my delusion of presumption. Miracles happen, I don’t deny this. But miracles are sourced in God or they’re not miracles at all. Presumption is just the folly of the soul attempting to manipulate its own way. That’s about as fascinating as a two-year-old pitching a fit. Presumption and delusion robs me of my union. The real fascination in this life is to hear the Will of the Father and watch Him produce majesty. Here I get to watch Him, know Him, and experience Him in my life. That is glorious adventure!

Then Jesus replied, “I assure you: The Son is not able to do anything on His own, but only what He sees the Father doing. For whatever the Father does, the Son also does these things in the same way.
John 5:19 HCSB

This is so good, John. Thanks for the post!!

Glad it spoke to you Felicia. Thank you for commenting! Bless you!

Jesus lived His life by listening, not deciding. He didn’t determine the will of God, He followed it. I like that. I have recently been on this very subject of not speaking my words, but let the Spirit do the speaking through me. We can pray for mercy, but don’t have the right or authority to command the elements unless the Spirit leads that direction. Thank you John for your posts. Blessings

That is precisely it Wanda! When He moves through and in me, then it is the Life of Christ anything other than that is presumption. Hallelujah I have His Life and I don’t have to figure it out in my reason. All I have to do is listen. I am looking forward to what you think about Monday’s post. Bless you and love you Wanda!

John, you are addressing something that is so crucial and so prevelant You are exposing the deception of these times. May many take note of your insight in these messages!

Thank you Jeanette for your encouragement! I wish it wasn’t as prevalent as it is but it seems this is an epidemic and spreading quickly. The only cure is the Life of Christ. Thank you Jesus for a perfect solution!

Thank you, John. So anointed and timely. You waited and heard. Bless you!

Oh Jean, how easy it is to move out in presumption. Urgency tempts me so often. Thank you for your encouragement. I am grateful this touched you. Love!