I come from a long line of good people. I truly feel like the wild branch grafted into the Root Nature. I was just never able to successfully live out the character of being GOOD. If I am a frog, a frog I will be. Not that I didn’t give it a valiant try to be other than; I just never could successfully pull it off.  And this has become one of my greatest blessings! So for all the other frogs out there, let me share with you what I’ve found.

Recently I was leveled as I listened to Martha’s series Conquered by the Blood. While the first CD played, tears just flowed down my cheeks. The truth of what she speaks is so staggering. Christianity has become a bloodless religion, leaving many anemic, powerless and guilty. And as one who for so many years wanted to live by restitution, resolution, goodness, merit, and just doing it better…the reality of the Blood of Jesus has set me free.

Sin vs. The Blood of Jesus 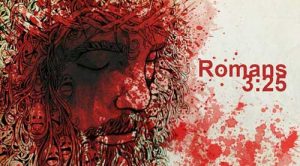 This morning, as I’m looking at it, I can see that when the Blood is our only answer, we can literally speak back at the enemy’s assault as if it were not us. Can you imagine? When he accuses me of my past, I can respond to his accusations as if I’m not that person. Though I committed the sin, my present reality is that we are two totally different people. It’s not that I go blasé or blot out the fact, but it’s no longer my reality because of the Blood of Jesus. It’s like he’s talking about someone else.

Cleansed by The Blood of Jesus 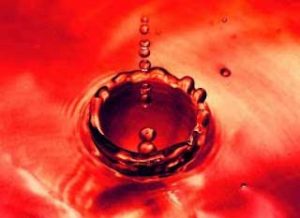 I’ve never experienced that before. I have experienced the guilt, shame, and remorse, and with these an emboldened determination to do better. But never have I lived in the reality that the Blood washes it away. So much so that it’s as if Satan was speaking of someone other than myself when he accuses me. That’s what the Blood is intended to do: remove your sin as far as the east is from the west. These two locations are so distant as to be never connected. East is as far from West as I am from my sin. The person who sinned, no longer has sin. No longer is it a part of me! This floors me completely.

Faith in the Blood 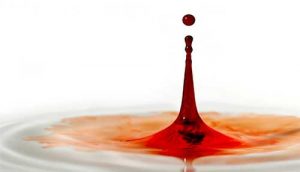 I do know the Blood is accessed through faith. If you don’t have faith in the power of the Blood, have you accessed it at all? If all things from God are received by faith, and the only thing that pleases God is faith, then are we truly living in the reality of the price paid if we fail to have faith in the Blood as the only answer? We are triumphant over the enemy by the Blood of the Lamb, the word of our testimony, and not loving our lives unto death. My story is not any less my story, but the things of my story are no longer my reality.

The enemy’s words and accusations of me don’t have the power to wound me when my answer is the Blood. The Blood of Jesus is my only answer. I am freed, atoned for, and justified by the Blood.

I want to live in the reality that my sin is no longer connected to my life. That the Blood of Christ that was shed on the Cross puts distance between my sin and I. I’ve lived in such a state that I’ve put faith in my sinfulness over the power of His Blood. It’s a sin to assign a greater power to my inability rather than valuing His ability. That’s the most shameful of all sins. It’s unbelievable to think that I would refuse to receive the only power of propitiation for my sin and for what—self? This is not a work of disassociation but a work of redemption. Being redeemed is totally different than the disassociated self. Though my sin is as distant from me as the east is from the west, it’s still my story. But it’s one that I’ve been redeemed from, that no longer has the power to shame me because of His Blood.

Until a fair Prince
shed His Blood for me.

And now I am free
and able to see,

That I am a prince,
from the Royalest Tree.

Thank you, John.
I know the power of the blood, having had an encounter with God, and afterward revealed more to me. But I’ve never been able to explain it as well as you did in this post.
I’m sharing this on my website charlenekugler.com
Please write to me if you have objections about my sharing on my site.
God bless you.

It is my joy Charlene that this post spoke to you! I am really glad you commented today. I needed to return to this message for my personal life. Your comment became for me a divine reminder. Thank you!

0
Reply
Power in the Blood by John – GettingwithGod.com | CHARLENE KUGLER

John, no joke – this lady I work with made a comment yesterday about her being “finer than frog hair” – it made m laugh but stood out to me. I really needed this word today. Thank you for sharing!!! So good!!!

Yep. All those who know Jesus intimately know the power of His blood. You are one who has experiencial knowledge. What a delight to see the reality of His blood in your blog.

Without the blood and the resurrection we could not have our personal relationship with our Holy Father, It’s the blood that gives us life with Christ now and hereafter.
God Bless You John,
Layman Lee

Thank you John this is a life saving life changing blog . For us to understand the blood is sufficient to wipe and wash all sin and GUILT AWAY. People understand that their sins are forgiven but they live in the false faith, habit, guilt, even false comfort of condemnation. It’s all washed away completely. The church has got to live this way, they have to understand it, so their not made impotent by the enemy. All you (me as well) who are struggling with guilt, take it by faith , ask The Lord for faith to walk in the… Read more »

Yes as always thank you for this reminder.
The shed blood of the Holy Righteous Son of God, Jesus is the only
propitiation for my sin within me…His blood is sufficient, His blood is enough….I receive His cleansing blood, I am washed clean and pure, by a Holy God because and only because of His Holy blood. Amen!

Yes and amen! Once again I see that Christ Is my All. It is His Blood that has cleansed me. He Is The Forgiver. He will reveal to me the power of His Blood that has forgiven my every sin when I yield my will to Him, surrender to His Life in me, and simply receive from Him. Thank You Jesus for speaking to me through John’s writing today.

Thank you John. The Blood is such a simple solution. I can see the bath of light and purity coming out of the Blood.

You exposed it with brilliance: “It’s like he’s talking about someone else.”