In my last post, I discussed a pastor’s contention with God’s naming of the prophet Jonah (“dove” in Hebrew) who displayed anything but a dove’s nature. I then showed circumstantially why Jonah justified his refusal to go to offer God’s mercy to the Ninevites. And I ended with an uncomfortable truth: “God didn’t put limits on His willingness to show mercy and forgiveness to the evil Assyrians or to us.”

Jonah was fearless. He had overcome his natural fear of death. Jonah was firmly convicted and convinced of his position against the Assyrians. He had no compromise in his beliefs about the situation. And Jonah knew who God was. He knew Him to be a gracious God, merciful, slow to anger, abounding in steadfast love, and relenting from disaster. Perhaps Jonah’s willingness to die was in the light of all that He knew of God, “For surely God would have mercy on him too!” But Jonah’s passion and conviction was misdirected, which stemmed from deep unforgiveness and bitterness in his wounded dove’s heart. This prophet became a persona of bitterness, rather than expressing his own God-given identity – a dove. His bitterness with the evil Assyrians was enough to resist God’s call and embrace his own death.

Here’s the reality: our wounds, bitterness and offenses can change our identity and personality. Our wounded hearts can make us something other than who we were created to be. And this is my explanation for Jonah. A soft-hearted man of God, who was in unforgiveness and bitterness with the enemies of Israel. Yes, his actions and personality went against his name, identity, and calling. 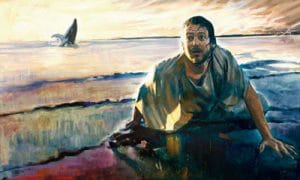 The nature of Jonah, as with every human heart, can remain in bitterness and unforgiveness when faced with murderous evil and great sin. This is why Christ used the “sign of Jonah” in His message. The sign of Jonah would be fulfilled in the Life of Christ. Where man had no power or desire to save the wretched soul of men, Jesus dove headlong into our destructive nature and solved it all. Natural man versus Christ, which is the continually presented comparison. Moses versus Joshua, Ishmael versus Isaac, Adam versus Jesus, the Temple versus Christ, and the list goes on and on—all these show our impotent bitter nature as opposed to the nature of His very own Life.

Then some of the scribes and Pharisees answered him, saying, “Teacher, we wish to see a sign from you.” But he answered them, “An evil and adulterous generation seeks for a sign, but no sign will be given to it except the sign of the prophet Jonah. For just as Jonah was three days and three nights in the belly of the great fish, so will the Son of Man be three days and three nights in the heart of the earth. The men of Nineveh will rise up at the judgment with this generation and condemn it, for they repented at the preaching of Jonah, and behold, something greater than Jonah is here.
Matthew 12:38–41

Again, we’re in the final stages of getting Martha’s newest book Altogether Forgiven ready to go to the printers. I just can’t wait to get this book into your hands, it is simply amazing. The power of forgiveness is greater than I ever knew. And the rewards of living forgiven and forgiving is beyond what I have ever conceived. Martha connects so many elements of the Life of Christ. It it she brings them together into a celebration of living All Together Forgiven.

“our wounds, bitterness and offenses can change our identity and personality. Our wounded hearts can make us something other than who we were created to be.” So true, John, and (as Martha would say) how do you think I know? Even though it may not be a conscious living-out, others sometimes pick up on this before we are aware — I’ve even become defensive, at times, because I don’t see me in the same light as, say, my husband. And what you describe can be the only reason why “you’ve never been that harsh,” or “I can’t remember you being… Read more »

Bless you Pauline, thank you for commenting. You make some awesome points here. Isn’t it funny how we will find ourselves defending the things that is hurting. Thanking God He is faithful to show us!

Hey, today is a big day. All the edits are complete. All we are waiting for is some paper samples from the printer to choose for Altogether Forgiven. It is a huge book and we want to make sure it is the best quality for you. You are absolutely going to love it Pauline.