Wisdom is a funny thing. And being wise is tricky. Why is this? Because those who think they are wise are usually fools. And those who consider themselves to be fools just might display the Wisdom of God. God, who IS Wisdom, is the One who declares who is wise. Man is neither judge nor originator of Wisdom. Wisdom comes from God and being wise is those in whom He chooses to bestow His Wisdom.

Claiming to be wise, they instead became utter fools.
Romans 1

Being Wise – Romans ONE 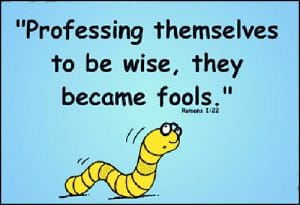 I saw this clearly the other day in Romans One, where it shows the result of one who claims to be wise without God. It’s utterly disastrous! I also noticed this in relation to passages in 1 Corinthians. Being wise is not in the declaration of possessing wisdom; it is in letting Wisdom be wise in you. Wow, now that will curl the lip of an intellectual. Wisdom is God or it is just foolishness masquerading as being wise.

Brothers and sisters, think of what you were when you were called. Not many of you were wise by human standards; not many were influential; and not many were of noble birth. But God chose the foolish things of the world to shame the wise; God chose the weak things of the world to shame the strong. God chose the lowly things of this world and the despised things—and the things that are not—to nullify the things that are, so that no one may boast before Him. It is because of Him that you are in Christ Jesus, who has become for us wisdom from God—that is, our righteousness, holiness and redemption.
1 Corinthians 1:26-30 NIV

Being Wise and Discipleship 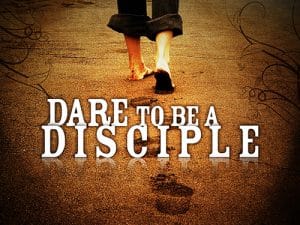 This week we start taking preorders for The Mystery of Discipleship. Orders will begin shipping the week of August 21st just after our conference in Atlanta. This long awaited devotional is now finally a reality. We are so excited for you to get your copy and start your 91-day epic voyage.

Why do I mention wisdom today in relation to The Mystery of Discipleship? Well, The Mystery of Discipleship was not written for those who would consider themselves wise, noble, or ample. These wise guys would never pay the actual price it costs to be a disciple. Capable men and women are satisfied with themselves and what they have accomplished. A disciple, on the other hand, comes to the table with nothing but a YES!

The Mystery of Discipleship is a 91-day epic voyage as a disciple. Who is the disciple? A disciple is one at the end of his rope. It’s the one who have come up empty while yearning for more. A disciple has nowhere else to turn and will abandon all to embrace all of Jesus. This is true wisdom!

Being Wise as a Disciple or Just a Believer 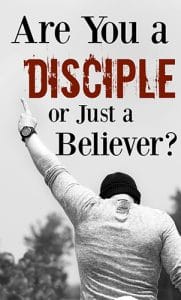 We were called to be a disciple not just a believer. Christ didn’t tell us to go into all the earth and make believers; He said make disciples, because it is disciples who are the ones who give all, receive all, and follow Him. A believer just believes, while a disciple lives the Life in Him.

So are you one of these foolish and weak ones Christ has chosen? Come and experience the adventure of Life. Embark on this 91-day epic voyage as a disciple and experience the Living Christ anew. Being wise is not having wise knowledge; it is to know from whence all Wisdom comes and choosing Him and His Life.

Let no one deceive himself. If anyone among you thinks that he is wise in this age, let him become a fool [discarding his worldly pretensions and acknowledging his lack of wisdom], so that he may become [truly] wise.
1 Corinthians 3:18 amp

Looking forward to book. My prayers are with you all this weekend. I will be there in spirit. Love to all.

Bless you Wanda! Again you will be missed…for sure I thank you for your prayers. Big love!

I am really looking forward to this new book. I am hoping to go through together with a couple of others, at the very least with my family. Can’t wait. Thanks.

Yeah Seth, this is kinda what I have felt for it. That it is set up for group discussion and interaction. Please let me know how it works for you. Bless you man!

So excited to attend the conference this weekend and purchase the book. As I read your post I was reminded how our human nature abhors looking foolish or appearing weak. The world and the church promotes and praises those who are strong and driven to preform and show how knowledge they are. Discipleship has been replaced with “Life Coaches ” and Counseling ” Teaching us how to refuse weakness, hardship, if we lack wisdom we can pay hundreds of dollars an hour learning how to keep the old man alive and well. Who are we allowing to mentor and counsel… Read more »

Oh that is so true Winnie. You’re really gonna love this book. Can’t wait to see you tomorrow!

This post is so full and concise……..”letting” wisdom be wise in me……WOW and then your giving the opportunity
to order the “The Mystery of Discipleship,” what a bargain. When I’ve shared with my friends about this new book, their reaction is please “order one for me”…….. I need to chew on this post some more but just had to respond with
THANK YOU and BLESS YOU for this wisdom in sharing these scriptures. I could have re-read them and missed what you have shared!!!!!

Bless you Sue, I think you are going to love the book! Big hugs…