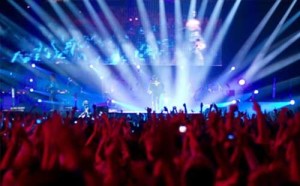 There’s a temptation of every worship leader who steps on the stage—performance. Inherently, when we step up on a stage and have an audience, we’re in danger of making the worship be about ourselves. It’s oh-so-natural and unfortunately, all too common.  Like standing before a mirror, we become enthralled with our own reflection. When we stand on a stage, gaining the admiration and attention of a crowd, we can easily roll into performance.

I had this thought because in preparing for our upcoming conference, we’re working on the music to be played. Then I saw a man at the gym standing before a full-length mirror with a smart phone striking poses and taking pictures of himself and his handy work. He didn’t even care that I was able to witness his adulation. He had an intended audience, not even nearby, that would be viewing the fruits of his physical labor. An audience makes us perform even when they’re not present.

Now this is not isolated to narcissists; this is the temptation of every human, let alone worship leader. No, not everyone succumbs to this temptation, but many do. It’s very primal and emanates from our very nature. Put a tutu on most little girls and ta-da – “I’m a star!”  Boys often display this a little differently, but start watching a little boy playing and when he notices your eyes are on him…ta-da – the battle is EPIC. We just like to put on a show and receive the attention of others because it feels like love.

Take this to the worship leader. All eyes are on them; they’re hopefully leading a crowd towards an admiration of the Father. Even with the best of intentions, the face may become more rapturous and beatific when there’s an audience. “Look how much I love Him, follow me. I’m a sign post to lead you to God.” But this whole process can become a trap for a fragile ego. There’s a slight shift when the sign post becomes source of the focus.

Additionally, some of this may not even arise from the worship leader. Some of those singing along aren’t interested in going beyond the horizontal plane of the performance. It feels good to have a sing-a-long in a crowd. You feel a part of something bigger than yourself, like you belong. Visit many an Irish Pub at night, the patrons belt out well-known folk songs because it feels good, like camaraderie. But is this worship? Not of God.

I was listening to Art Katz where he mentioned this very phenomenon. He spoke of the Sisters of Mary in Darmstadt, Germany, whose worship team is always found singing behind the parishioners and not in front of them. You never see them; you only hear their voices. They lead unseen so the Lord Himself is the focus, not the leaders leading. They too know the temptation is just too great when we’re on a platform to become a performer. 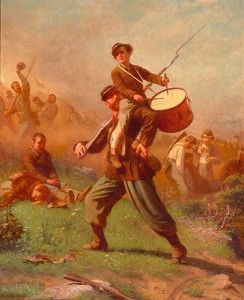 I actually think the practice of letting the musicians lead the army out to battle is a good thing. This way they have a healthy fear of death because they are on the front lines. They stand between the opposing army and their protection. There is no preening seen amongst them; they are wholly focused on the job at hand—presenting the banner and hailing the victory.

I haven’t veiled my resistance too much of the worship coming out of Christendom. It just feels like performance that exalts self more than glorifying God. I’m not saying we should stop singing. I love good worship; I just wish it could be less man-centered. If I wanted to go to a concert, I’d pay my money and go. But when something is supposed to be about worship, a performance is defiling. “This is for God, yet it’s not about God?!”

Ultimately it does make me pray for those who are in the position to lead worship. Their temptation is just so huge! The platform of performance is a slippery slope for sure.

Jesus replied, “You hypocrites! Isaiah was right when he prophesied about you, for he wrote,

‘These people honor me with their lips, but their hearts are far from me. Their worship is a farce, for they teach man-made ideas as commands from God.’
Mark 7:6-7 NLT

“Ultimately it does make me pray for those who are in the position to lead worship.” Thank you for reminding me to do this John. As one who was a member of the praise band at our fellowship for years and years, I look back and see that the experience brought me to a place where The Lord could begin to teach me about worshipping in spirit and in truth. I played my best for Him par rum pum pum pum.

It’s so easy when you want to bless others with song or word to say in your heart “Look at me, I’m being used of the Lord” Thank you once again for sending the sword to the heart of the matter.

John, my apologies…I read this earlier on my phone and thought it was written by Jen…so sorry!

Jen, this is such a wonderful post…I’m sharing it with our worship team.

So looking forward to meeting you at the conference! 🙂 Blessings!!!!

John 4:24 reveals: The Lord wants us to worship Him in spirit and in truth. Genuine and whole-hearted devotion & worship is what our Heavenly Father desires. Let’s become so focused on expressing our love to Him that nothing else matters. Bringing every thought captive to the obedience of Christ, because we are easily distracted if we’re not focused on loving The Lord and receiving His Love. We can’t put agape love, or the creativity of the Holy Spirit, in a box but we can direct worshippers to focus on adoring The Lord. If the worship leader has pure motives… Read more »

I, too, have resisted organized worship in the past. Recently, I’ve come to see it as a way to bring me to humility. I’m but one of many, seeking God and calling His name. Regardless of where I am in my walk compared to those around me, I STILL NEED. The youngest Medal of Honor recipient was a 12yr old drummer boy. His bravery and steadfastness during a seven day battle is a wonderful story. I don’t mean to compare his courage to others, only to say that who knows what will inspire, touch, or encourage another to continue their… Read more »

Thanks for sharing this perspective. I am but one of many – yes humbling – but how encouraging it is to know we are one in the bonds of His Love.

This is exactly why God called me out of professional music. I have a BA in music. But the attitude of the singer and the musician is: Here I am! Clap! This is pride! Now in the church, there are some sincere worshippers, but there is always the temptation to exalt self instead of God. It’s about heart. Personally, I am a songwriter, yet God has not released me yet to share my songs with others. The Lord has called me to be a lover of Him in secret. The songs are for HIM!

Cindy, there is NOT a single real worship that goes unnoticed both on earth or heavens. The ripple of true worship resounds and enlarges forevermore. It just expands IN God. There is no end for the reward of losing your life.

Singing songs is not the purpose of Worship! Singing could be an expression of Worship, but not ever Worship Himself!

BTW, most probably Jesus did not have a good voice.

Under this light, the list of worshippers gets reduced and smaller… to my own surprise, it could happen that “I” myself am left out.

Like a sword of the Spirit cutting through to the truth is this message, John and Sam. blessed be the God and Father of our Lord Jesus Christ for this clear message.